First Canada, next the world 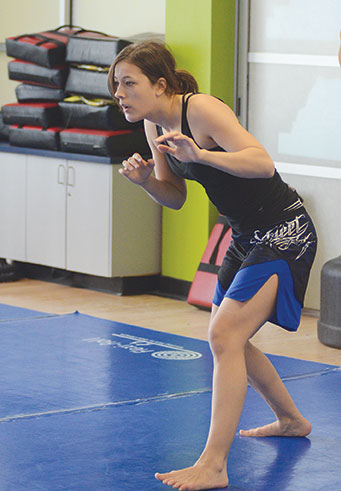 Sandra Lanois-Bazinet has combined her kickboxing skills with Can-Ryu, Brazilian Jiu-Jitsu, Muai Thai and Judo to help her beome an international fighter.

What started as an outlet for a little, shy and awkward girl growing up in Vanier and having troubles with bullies at her school quickly became something she could love.

She has been entered in the blue belt level female adult light open competition and will face off against contenders weighing in at 145.2 pounds and under.

The road leading to this opportunity was paved with years of practice, knowledge earned in multiple forms of martial arts, and a desire for competition.

“It was hard to believe at first that I’d be a champion,” said Lanois-Bazinet. “But now I’m going to Abu Dhabi and representing Canada. So now it’s about being the best in the world.”

Lanois-Bazinet isn’t so little and not so awkward anymore either, especially when on the mat in front of an opponent. Today, she continues to strive to do better and be as close to perfection in martial arts as she can.

“When I first started my martial arts career, I was a different person with not much self-confidence,” said Lanois-Bazinet. “But the environment from martial arts and the competitions helped mold me and helped me grow to what I am now.”

On August 2008 she competed in a smoker fight, her first mixed martial arts fight. A smoker fight is an amateur fighting competition that gives new fighters some ring time for attempting bigger competitions.

But her first real MMA amateur fight came a year later. This amateur competition allowed her to be labelled the youngest female to compete in amateur MMA. It also fueled her love for competition.

As an added bonus, Lanois-Bazinet is one of Canada’s youngest amateur featherweight champions in mixed martial arts.

She has been honing her skills in multiple forms of martial arts since she kicked off her career under the tutelage of Aline de la Rosa in traditional Japanese Jiu-Jitsu, a martial arts self-defense form also known as Can-Ryu, on her 10th birthday.

“Sandra is very goal-oriented and driven, and always set her goals high,” said Rosa. “Her mental aspect is outstanding, especially when she’s in competition mode. She’s able to enter her own world and put the steps together to get what she wants to achieve. She’s dedicated and trains multiple times a day when she can.”

Lanois-Bazinet later earned her first black belt when she was 16, around the same time she started teaching adults Can-Ryu and children Brazilian Jiu-Jitsu and Can-Ryu. She continues to teach children and adults today.

“She was great with the kids and she’s just a generally great person and an excellent role model for the kids,” said Chris Ryan, a parent of one of Lanois-Bazinet’s students.

She has been a practitioner of Can-Ryu for 12 years and has earned her second-degree black belt November 2013 under John Therien in a Therien Jiu Jitsu and Kickboxing location in Ottawa, where she also has been attending kickboxing classes under Jean-Yves Theriault for the past five years. She has also been a practitioner of Brazilian Jiu-Jitsu for three years and earned her blue belt under Felipe Heidrich and Wade Shanley.

“She’s very strong and her long legs are really good for Jiu-Jitsu,” said Brazilian Jiu-Jitsu trainer Wade Shanley. “Sandra’s not a quitter. Her only real weakness came at first with her confidence. But then she started winning and now she’s tough and will always go for a win.”

In the past two years Lanois-Bazinet has taken up Muay Thai under James Helmer and started dabbling in Judo, and wrestling under instructor Benjamin Sayah at Algonquin’s Impact Zone in January 2014.

Throughout her martial arts career, Lanois-Bazinet continues to compete on a regular basis in Brazilian Jiu-Jitsu, kickboxing, and MMA competitions. She has earned multiple podium finishes which include a gold at the Toronto International Brazilian Jiu-Jitsu Federation Open and double gold at the Ottawa Open.

Between school, work for martial arts clubs, martial arts training and competitions, Lanois-Bazinet barely has time for much else but she still manages to join her friends for a movie night at the theatres, practice the guitar, or attend some salsa dancing classes when she has the chance.

With a long, lean torso and limbs, broad shoulders and an expression so focused and serious on the mat that it unnerves her opponents, Lanois-Bazinet is a well-trained and prepared martial artist that plans on bringing her all to the World Championship of 2014.

What comes next is unclear but Lanois-Bazinet has expressed an interest in travelling internationally to teach what she’s learned in martial arts and see the world. She’d also like to add some more black belts to her collection but said the higher black belt degrees would only come with time, patience, and a lot of travelling.