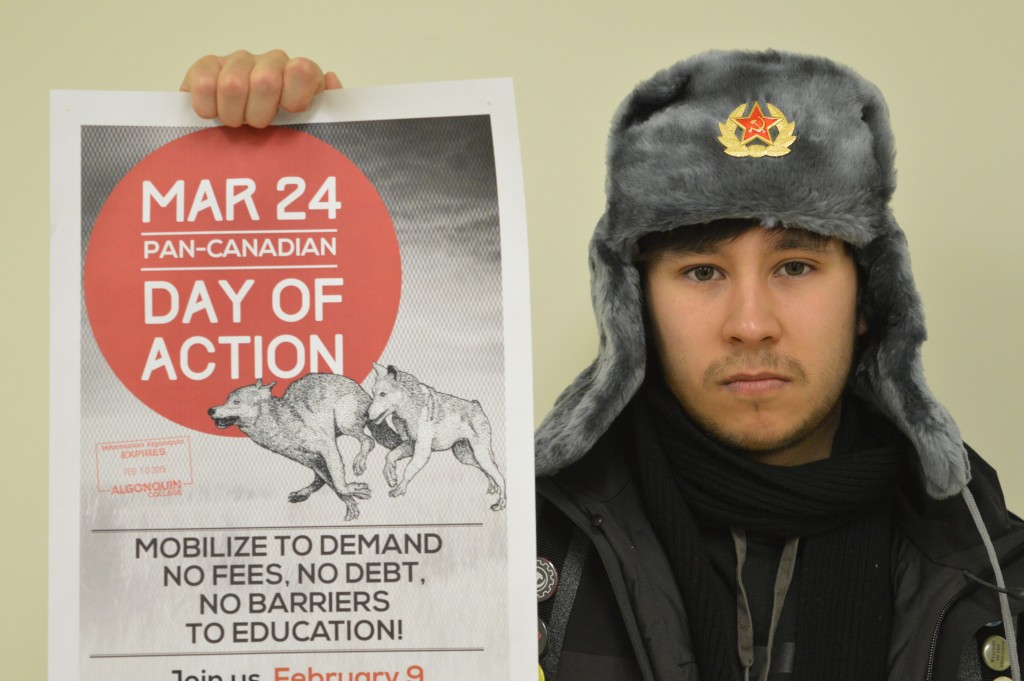 The Revolutionary Student Movement, a communist collective, protests against tuition. Brendan White is a member of the Algonquin chapter.

“It’s a struggle that needs to continue until tuition and student debt is abolished.” Dmitri Melnik may never see that dream realized.

Abolishing tuition across Canada would require a comprehensive education reform bill to pass through the federal government.

But Melnik, social service student and member of the Algonquin chapter of the Revolutionary Student Movement, will continue fighting in the form of protests March 24.

The RSM is a loosely organized communist group that operates nationwide. They have set March 24 as a “day of action,” to show solidarity with Québécois students protesting tuition rates through staged walk-outs, demonstrations and rallies.

“We don’t plan on stopping after March 24,” said Melnik.

Brendan White is the other member of Algonquin’s RSM. He believes that if the student body could be represented through the Algonquin Students’ Association, the RSM’s baseline goals – for example, allowing students to call for referendums – would be easier to achieve.

“Our SA has nothing to do with student politics,” said White.

Instituting direct democracy into the school administration’s decision-making process through general assemblies is another important step.

The SA does make $500 available to the group each semester for activities and promotion. They also receive funding to the tune of $1,000 yearly from the Ontario Public Interest Research Group, which aims to “bring together and build upon a broad-based community dedicated to social, economic and environmental justice.”

According to Melnik, OPIRG invests in the RSM because it is an “action group.” Although the support from OPIRG can’t hurt, Melnik and White believe their main hurdle is getting students at Algonquin and at other colleges and universities interested in the cause.

On Feb. 9, a meeting to discuss how the wider student body would engage with the protests on March 24 was derailed when no-one showed up, but Melnik remained optimistic.