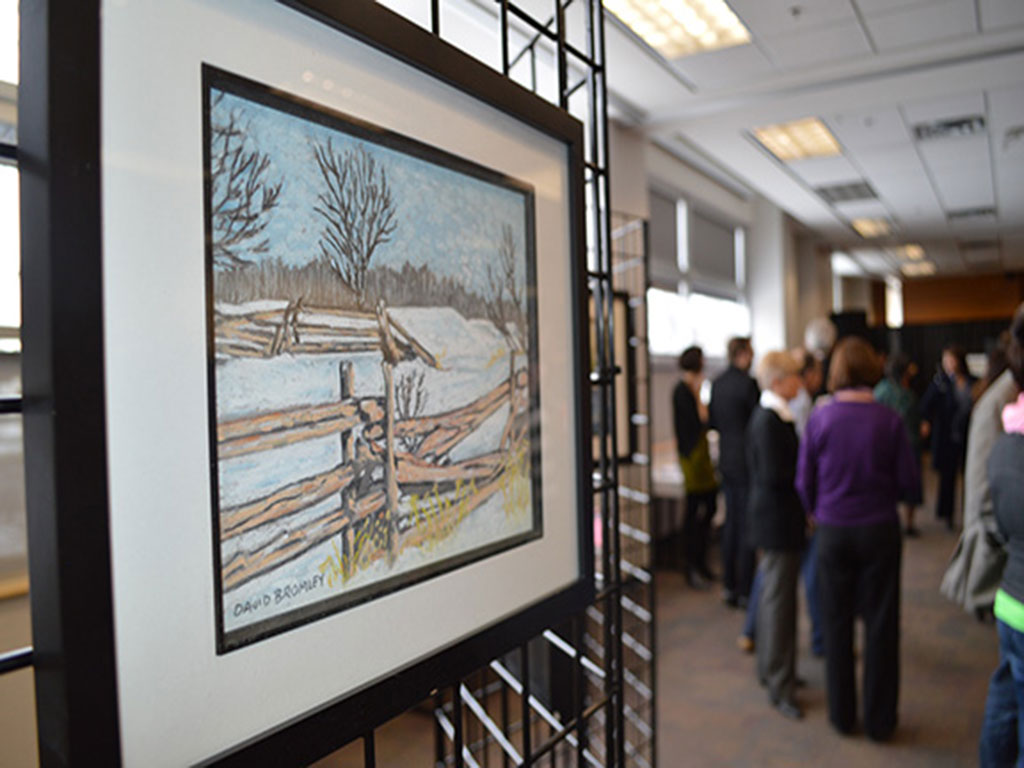 Algonquin faculty and administration showcased the work they do outside of school in the seventh annual Faculty of Arts, Media and Design Show, February 14th.

The one day exhibit was held in T-building. “It allows faculty and administration to come together and celebrate what they bring to this wonderful community, and to show our appreciation to them,” said Algonquin President Kent MacDonald.

This is the second year President MacDonald has held his President’s Coffee Break with the exhibit, which gives staff a chance for an informal conversation with the president.

The art show, which exhibits the work teachers do outside the building, was created by the design studies chair, Linda Cooke.

The exhibit was originally organized to showcase the work of the design faculty, similar to the media studies Hall of Fame. The exhibit was a success and in the years that followed both the general arts and science and the media departments were included in the show.

The annual exhibit continues to grow. This year, eight exhibitors showcased work varying from photos, to paintings, woodwork, to pottery, and even board games.

“This year was an added bonus because we had a group of talented musicians,” said Nancy Boughner, Algonquin information administrator. “Our band was made up from faculty and staff, one of our singers was a recent grad.”

The seven piece band performed to an audience of 215 Algonquin staff members, and included vocals by Dean Russ Mills.

President MacDonald was also on scene to hand out the President’s Star Award, in recognition of outstanding dedication to the Algonquin community.

Diane Banks, faculty marketing officer, was presented with the award for her “commitment to improving the college’s community, consistently organizing and attending numerous events around campus, whether social or educational,” the commendation said.

Andrea Emery was also on hand to receive a Presidents Star award, the professor and co-coordinator of the Graphic Design program, “helped without any thought of reward as she took on these tasks in support of the Public Relations and Communications Office, but her hard work is worthy of both recognition and praise” her commendation said.

All commendations are available for viewing on the Algonquin website.