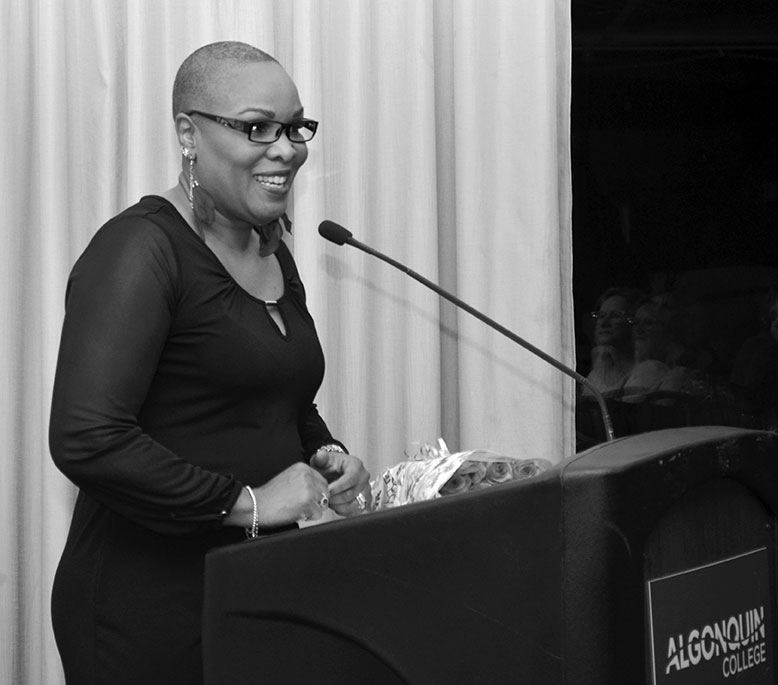 The evening was filled with charming compliments, polite introductions and a good amount of giggling between the women attending the second annual international women’s week dinner, held in the staff dining lounge on March 6.

Among the crowd, only five men were in attendance, the other 80 were women.

The night started with a networking opportunity at 5 p.m. and a song played by first-year music industry arts student Natalie Velenos, who wrote the song exclusively for the event.

“I ran with the theme of the evening, so it’s focused on inspiring women and what inspires me on a daily basis,” Velenos said.

Even after forgetting her lines during the first verse, the audience loudly supported Velenos as she ran to grab her notes. Once back, Velenos captivated the room during her second try and right through to the end.

The event organizer, Chris Brennan, greeted guests warmly and was always on top of any chaos thrown her way.

An extra table of 10 had to be set up because there wasn’t enough space for the guests, but everyone helped out and it was done in no time.

The room seemed to always convey a mood of uplifting happiness which was accompanied by assistant general manager of Food and Beverage Operations Gordon Esnard, known to most as Gordie, who charmed the ladies and kept everyone laughing and in high spirits throughout the night.

“From the few men that I see here tonight, thank you for bringing all the ladies,” Esnard joked.

Brennan announced that Gordie was actually a driving force and sponsorship behind making another women’s week dinner happen.

A booth was set up to promote Project Tembo which is a five year organization which provides opportunities for girls and women in Northern Tanzania. A member of Project Tembo and a retired professor of Algonquin, Donna Serafini, set up the pictures from her recent trip back from Tanzania where she got to witness their accomplishments in person.

“For a couple years the women’s dinner didn’t run, so I’m really happy to see it back again,” said Serafini. “It’s important.”

Good friend Cathrine Kenney, the honouree for Robyn Heaton, described the hardship she has gone through and the positive change Heaton inspires in others on a daily basis. Heaton just recently went through the loss of both her husband and father, yet still devotes her time to her family, her job and her volunteering.

“She is truly a remarkable woman and she has gotten me in quite a lot of trouble,” Kenney joked. “They say you have to walk in someone else’s shoes, but I’d break an ankle if I ever walked in hers.”

After Kenney was done, Heaton’s two sons Simon and Adam who were in the audience, came up to say a few words on behalf of their mother. This also garnered a few tears.

“It’s incredibly honouring to be awarded for something you do every day. I just do what I can for my family, faculty and friends,” said Heaton, after accepting flowers and a donation to the foundation for Prader-Willi Syndrome Research in which she is on the committee for.

Karen Gendron and Jill Reeves were the speakers for Tess Porter.

Gendron spoke about the heavy impact Porter had on her life during a time where Gendron’s health wasn’t well.

Gendron also spoke about how Porter donated a kidney to someone she didn’t even know.

“Just when you think Tess couldn’t get more inspiring she donates her kidney to a man she doesn’t know and says to me ‘I haven’t met him yet but this is important,’” Gendron recalls.

Both honourees received standing ovations and although Heaton and Porter are very much different, there are certain qualities that were mentioned by each speaker that they seemed to have in common: supportive friend, devoted wife and mother, known for their mentorship and volunteer work within the college and community, and making huge differences in the lives of almost every person they met.

Porter also received flowers and a donation to the Youville Centre where she is involved.

“You just don’t know how you’re going to touch someone. Everyone in this room has the potential to make a difference. Like I tell my girls, we’re all in this thing called life together and we must support each other,” Porter said. “At the end of the day, it’s important to be true to yourself and believe in your capabilities and you can do all things.”