Evacuation plan leaves some behind 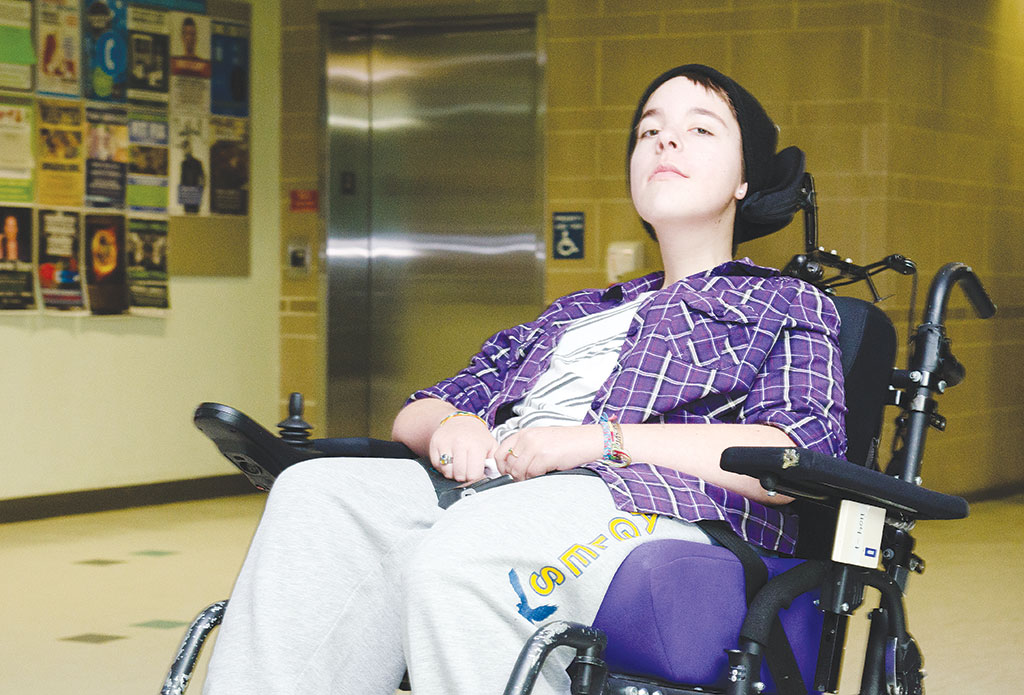 A recent Woodroffe campus emergency evacuation in sub-zero temperatures has exposed some shortcomings in Algonquin’s policies relating to the protection of disabled students.

Cindy Wildhaber, who is confined to a wheelchair and unable to reach the controls, was left wondering what to do outside an elevator in the N-building when the smell of natural gas engulfed the campus on Feb. 6.

“I was never told what to do in case of an emergency,” said Wildhaber, who has congenital muscular dystrophy.

The smell caused some students and staff to complain about light-headedness and eye irritation. Two students fainted, college officials reported. The evacuation disrupted classes of thousands of students and caused some to be cancelled.

In Wildhaber’s case, unable to access the emergency exits, the first-year interactive multimedia development student was trapped in N-building by the closing automatic doors, which cut off her access to the overpasses and nearby buildings.

N-building support staff Barbara O’Neil and Rob Powell were evacuating themselves when they noticed Wildhaber was alone outside the stairwell.

“We stayed with her a bit, but the smell and fumes were getting worse and we did not see security,” said O’Neil. “We were concerned for all of us.”

After 10 minutes of being exposed to the noxious fumes, a now-nauseated Wildhaber decided to enter the elevator with the help of O’Neil and Powell.

“I was scared I was going to get stuck,” she said. “I have always been told never to use an elevator in an emergency.”

Today, Wildhaber still does not understand why she was left behind.

But her experience should never have happened, according to the college’s emergency policies.

The college’s own Inclusive Workplace Emergency Response Plan, while intended for employees, refers to the existence of an emergency evacuation registry for students with disabilities. The registry is supposed to be updated each semester in coordination with the Centre for Students with Disabilities (CSD).

However, the database — which was created in 2012 — has not been updated for “at least the past three to four years,” according to Colin Bonang, the school’s associate director of safety, security and emergency management.

“It was a good idea at the time, but the database needs to be fed information from CSD,” Bonang said. “We tried for a few semesters (but) it was problematic in terms of its reliability for people’s location.”

However, he did say security services does work with CSD on a case by case basis for individuals with highly specialized needs.

But that does not sit well with game development and CSD-registered student Casey Gould, especially when college employees with disabilities are supplied with individual emergency evacuation plans under the Accessibility for Ontarians with Disabilities Act (AODA).

While the intent of the plan is to create a specific exit strategy from an employee’s regular workspace, Gould said a mobility-impaired college employee can still move away from their location throughout the day despite using a wheelchair.

“It’s pretty unfair,” said Gould, referring to the absence of parallel policy concerning disabled students. “We should be taken care of the same way an employee should be.”

Gould, who has Duchenne’s muscular dystrophy, was on the third floor of J-building during the Thursday afternoon evacuation when the instructor and classmates exited the classroom, leaving Gould behind in the process.

Like Wildhaber, he was left with no other choice but to use the elevator.

“It was a really horrible thing to have happened,” Gould said. “I picked Algonquin College because it is wheelchair accessible.

“I would expect them to have a better evacuation plan.”

“I get that it’s frustrating for those individuals,” said Luke Furmidge, the college’s emergency management coordinator, responsible for planning the college’s evacuation procedures.

Nevertheless, according to Furmidge, Algonquin has already met the legal requirements of accessibility regulations.

As such, “it really is the student’s responsibility to inform security of them having some accessibility issues on campus,” said Sandra Fraser Pross, a disabilities counsellor at the Centre for Students with Disabilities.

Others feel the procedure needs to be clearer to students.

“Students do need to know what is going to happen and the processes outlined by security and the fire department,” said Karen Coffey, the college’s AODA advisor.

But the expectation comes as a surprise to both Gould and Wildhaber. Gould, who is in his second year, said he was never informed by anyone at the college about emergency planning or evacuations.

“I wasn’t even sure if I waited at the stairwell if someone was going to show up,” he said. According to the college’s accessibility wayfinding site plan — the same map provided to students when they register at the school’s disability centre — there are no marked collection points.

There are some collection points marked on the emergency services site plan, but it excludes others, including elevators.

When Wildhaber asked a security guard what she should do in emergency situations after the evacuation had taken place, “he told me there are certain elevators that they check but he didn’t even know which ones.”

Yet for those without elevator access, the situation became even more desperate.

“We called security,” said Doug Wotherspoon, head of the school’s Advancement Division which oversees the college’s communication departments. “It rang but no one answered.”

Other staff reported calling the security line prior to the alarm to report to the gas smell, but there was no answer.

With the building’s elevator out of service and everyone else already out of the building, Wotherspoon described how vice president academic Claude Brulé stayed behind with a mobility-impaired student, who — along with his service dog — was unable to exit the building. After 10 minutes of uncertain waiting, Wotherspoon claimed Brulé prepared to carry the man down the stairs ‘piggy-back style’. Fortunately, the all clear was given a few minutes later.

The incident also exposed the college’s emergency policy in digital form as well.

Only a single sentence in the Algonquin Emergency Procedure mobile application was found to address the needs of students with disabilities.

Bonang, who oversaw the app’s release in September 2012, was able to confirm “there is no specific direction for persons with disabilities in a non-fire evacuation.”

Wildhaber claimed the app blatantly assumes everyone can walk.

According to Gould, those who can walk out of a building can never fully appreciate the real-life experience of a person in a wheelchair. Combined with the college’s lack of follow-up protocol to check in with those with disabilities following an emergency, few will understand the potential danger Gould, Wildhaber and others faced when left behind.

“It’s not right that they can get away with it,” he said. “(The college) should care more.”

But there is a silver lining, said Wotherspoon.

“Of all the bad that happened, the good part is that it allows folks to test existing practices and processes to see if they stand up,” said Wotherspoon, who acknowledged campus security would be conducting an after-action review. As of publication, the review has not yet been released.

For now, Wildhaber is left wondering how she fits into the patchwork of emergency evacuation strategy for students with disabilities.

Between the incomplete protocols, the outdated registry systems, the delays and the uncertainty, she fears falling through the system’s gaps and flaws again.

“I just want to know what to do next time to be more prepared,” Wildhaber said.