Education across the ocean 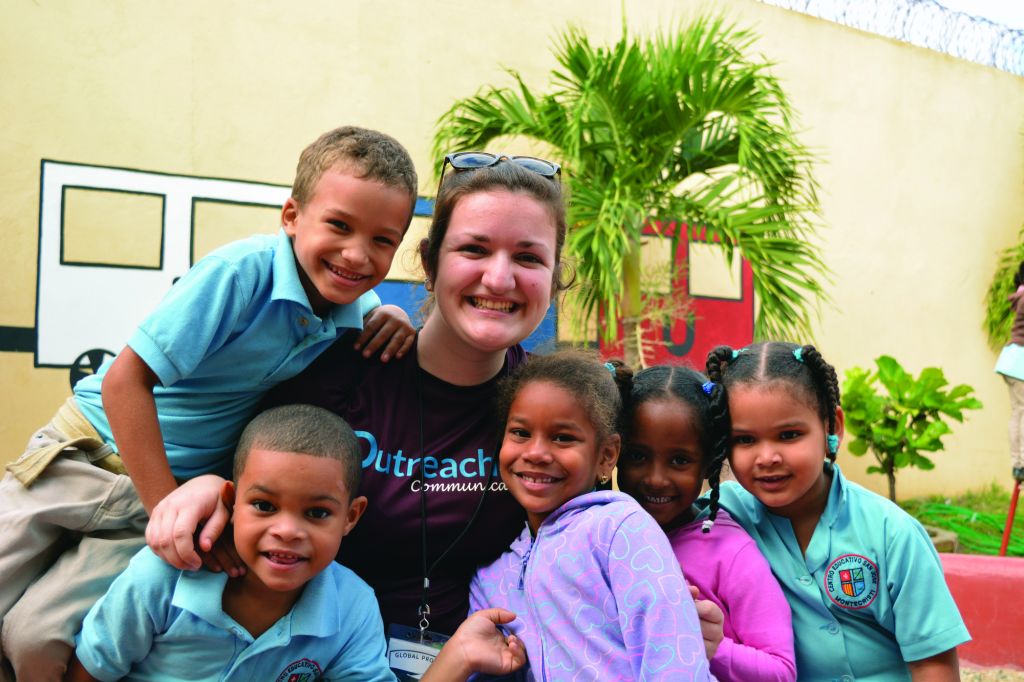 Matthew ran across his tiny, overcrowded classroom with the biggest smile on his face. His eyes gleamed as he gave me the strongest high-five his little kid arms could possibly muster.

Given his excitement, one might think the kindergarten student had just been given a lifetime supply of new toys or candy.

But that wasn’t the case at all.

Matthew had just been picked to approach the front of his class and demonstrate the basic English skills he had learned over the course of a week. The young boy timidly answered the questions asked of him, then turned to run over to me with exhilaration when he realized they were all correct.

During the week I spent with Matthew he often kept quiet and rarely uttered a word to me, even in his native language of Spanish. But by that final Friday morning, I saw a glimmer of confidence and a passion for learning in him that was encouraged by his fellow classmates.

Matthew is one of many children I had the privilege of teaching in San Fernando de Monte Cristi, Dominican Republic during winter reading break Feb. 18-25.

While many college students had the opportunity to sleep in late and watch Netflix for a week, myself and 21 other Algonquin students and three staff spent our mornings being awakened from our mosquito-netted beds to the sounds of revving motorcycles and squawking chickens.

Working with Outreach360, an organization that has established itself in both the Dominican Republic and Nicaragua teaching English to elementary school students, we jumped into Dominican life and all that it entails.

This meant eating their food, showering in cold water, enduring the humid climate and going without cellphones or internet for the entirety of our stay.

“The week-long immersion into the Dominican culture was amazing,” said George Shephard, first-year police foundations student. “It made me feel like I was a part of their country, like I was born and raised there.”

In the months leading up to our trip, we met as a group every week to prepare for the cultural reality of the Dominican Republic.

“The weekly group meetings are essential to student volunteers building a solid support network and preparing for a complete cultural immersion,” said Rebecca Sun, co-curricular record and volunteerism coordinator at Algonquin. Sun was one of three group leaders for the trip.

“We try to prepare the student volunteers as best as we can for the journey,” she said. “Everyone experiences the trip in different ways.”

But Jessica Keating found she didn’t connect with the other volunteers during that time.

“I don’t consider myself a super shy person but I also find it hard reaching out and meeting people in that setting,” said the second-year social service worker student. “It wasn’t until getting thrown together on a plane to the Dominican that I really began to make connections and friendships that I know I will have for a long time.”

Outreach360 has had a permanent presence in the Dominican Republic for 20 years. The local community is familiar with and grateful for the organization. Their work depends heavily on volunteers coming to teach their students during short-term stays.

In order for the volunteers to be accepted in the community of Monte Cristi, they are required to wear t-shirts with Outreach360 logos on them. Because of these brightly coloured shirts, it was common for children to wave at us and exclaim, “Teacher! Teacher!” when they saw us around the town.

“I have loads of experience working with children, but nothing could have prepared me for this,” said Haleigh McKenzie.

The second-year police foundations student’s biggest struggle was that she didn’t realize how hard teaching would be.

“Walking into a classroom and not knowing if you can communicate, much less educate, a group of young students from another country was extremely challenging,” she said.

Her first day of teaching was particularly exhausting and difficult, but once she saw the students develop and start to pick up the lessons throughout the week, it “made all the hard times worth it.”

Although our mornings and afternoons were spent teaching the students and planning lessons for the following days, our evenings usually consisted of some cultural activity – Latin dancing, movie documentaries on the history of the Dominican, an evening church service and more.

One night, Audrey Sharp, a staff worker with Outreach360, gave us a talk about the Dominican culture. In a small digression, she told us that sugar cane is very popular in the Dominican.

She explained that we might notice children in the classroom whose teeth have rotten. She said some of the students’ parents likely harvest sugar cane and, thus, it is their “only form of sustenance.”

While our group had set out with the goal of teaching students, many of us found it was the students who taught us invaluable lessons.

“It changed my perspective on everything,” said Brad Boldovin, first-year library information technician student. “I used to be so stressed about everything… Now that I am back (in Ottawa), none of it bugs me anymore. It’s like I see the lives of all those kids and I realize how privileged I am and that I need to appreciate that more often.”

For James Thibaudeau, this feeling of privilege came the night we arrived back from the trip, when he saw a pencil sitting in a puddle by the roadside. When he saw the pencil, he was reminded of the students and their enthusiasm over borrowing pencils from him one day.

“They were super excited to get pencils, some even tried to get more than one,” said the second-year computer programmer student. “A lot of them did not want to return them at the end of the class and would pretend they didn’t have one of ours to give back. It made me think about how something so small and insignificant back home could mean so much to someone else. Seeing the pencil in the puddle just kind of drove that thought home.”

With friendly locals who barely spoke a word of English, goats roaming the streets and houses that were smaller than the size of my bedroom, it felt as if I had stepped into another world.

One day when I was teaching in a kindergarten class, I noticed one of the students had many rotten teeth. Recalling what the Outreach360 staff worker had said about sugar cane, my heart sank. Feeling helpless as ever, I continued to do my small part and teach the children their English lessons.

The image of that little boy with his rotten teeth is one I am unable to erase from my mind. It’s not something that’s going away anytime soon.

Without uttering a single word, he pulled my heartstrings in a more powerful way than I can explain.

This boy, among a few dozen others, waved and said goodbye to us as we left their school for the last time during our week of teaching. I looked around at their smiling faces, which are now ingrained in my mind, and realized that many of them will never remember mine.

But in that moment, and as I made my way back to Canada, I found myself echoing one of Outreach360’s 10 principles in my mind and heart:

It’s not about you.

Outreach360 exists to give the students of the Dominican Republic hope for their futures. The organization works hard to ensure that the students are successful, with the help of their volunteers.

It would’ve been easy for me to get caught up in making a huge impact on the students, but this trip wasn’t ever supposed to be about me.

It’s unlikely that any of the kids will ever remember my name and my face will soon become a blur to them. While my impact feels ever so small, I move forward knowing that these children have hope for their future.

I won’t be there to see it, but I am grateful to have been a small part of it.