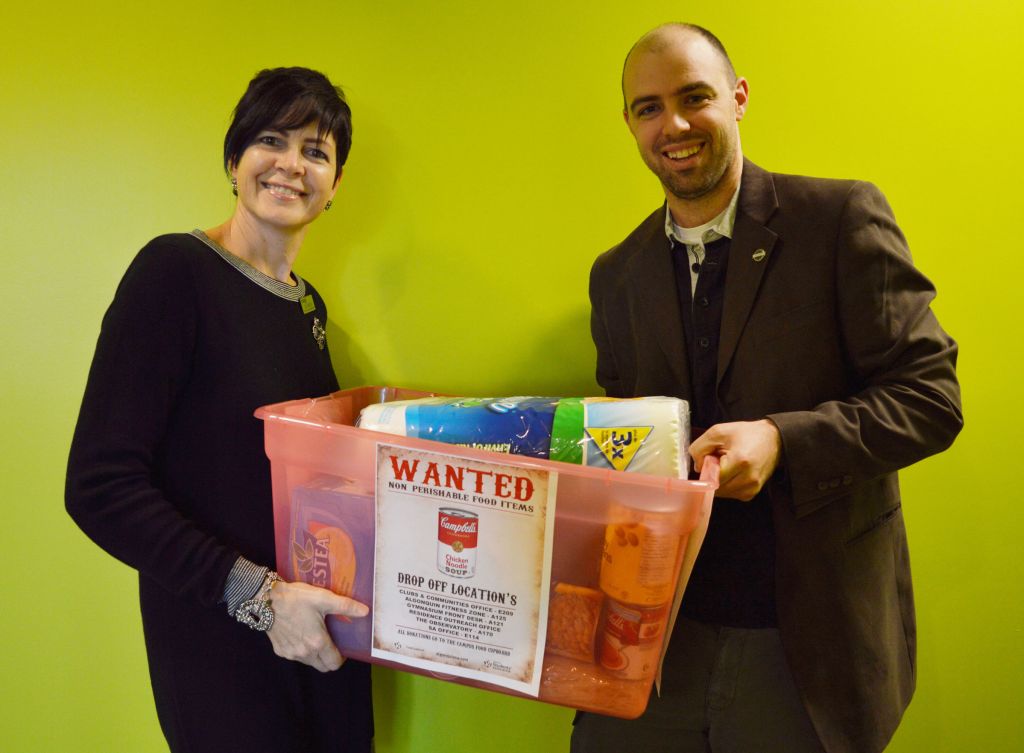 Jill Reeves, coordinator of the police foundations program, and Nicholas Lapierre, financial aid officer, are both supporters of the food cupboard on campus and together will be tapping into a college-wide membership to promote an upcoming food drive.

The Students’ Association is holding its annual October food drive to collect donations to support an on-campus Food Cupboard that is set to open in mid-November.

As a result, students will no longer have to visit community food banks for their basic needs.

The Food Cupboard will act as an on-campus food bank where students in need can have access to a three-day supply of food and basic necessities for up to once a month.

Food Cupboard coordinator, Skye Sullivan, recognizes that there has been a need for such an initiative within the student population for a while. She believes when people are unable to make ends meet, it causes issues in other aspects of their lives.

“A lot of students struggle financially,” said Sullivan. “If students don’t have food of their own, it’s going to affect their performance in the program and so we’re hoping that by being supportive in this area, they can be successful in the program that they’re here for.”

“How utterly sensible that access to food be established right where our students learn.”

This is the first time that the college will be having a food cupboard on campus. In the past, all donations collected through the food drive went to the Ottawa Food Bank which was inconvenient for students in terms of travelling.

“How utterly sensible that access to food be established right where our students learn,” said Jill Reeves, coordinator of the police foundations program.

Reeves, who has made a donation towards the food drive, believes that supporting students by making donations is fundamental to their success.

“My inspiration for donating stems from my role as an academic advisor, having often referred students to the Ottawa Food Bank branch closest to them,” said Reeves.

Nicholas Lapierre, Financial Aid Officer, has also been working closely with students in need on an on-going basis.

Reeves and Lapierre are both supporting the food drive along with the Young Professionals group. Together they will be tapping into a college-wide membership to promote an upcoming food drive which, they hope, will set up the Food Cupboard nicely through the holiday season.

Drop off locations for donations include the Clubs and Committees office, Fitness Zone, gymnasium front desk, residence outreach office, the Observatory, and the SA office.

The SA are accepting donations for the Food Cupboard such as non-perishable food items and egg cartons. Donations collected are being stored in a storage cupboard and will be deposited in the Food Cupboard, to be located in the C-building, when it is launched in November.