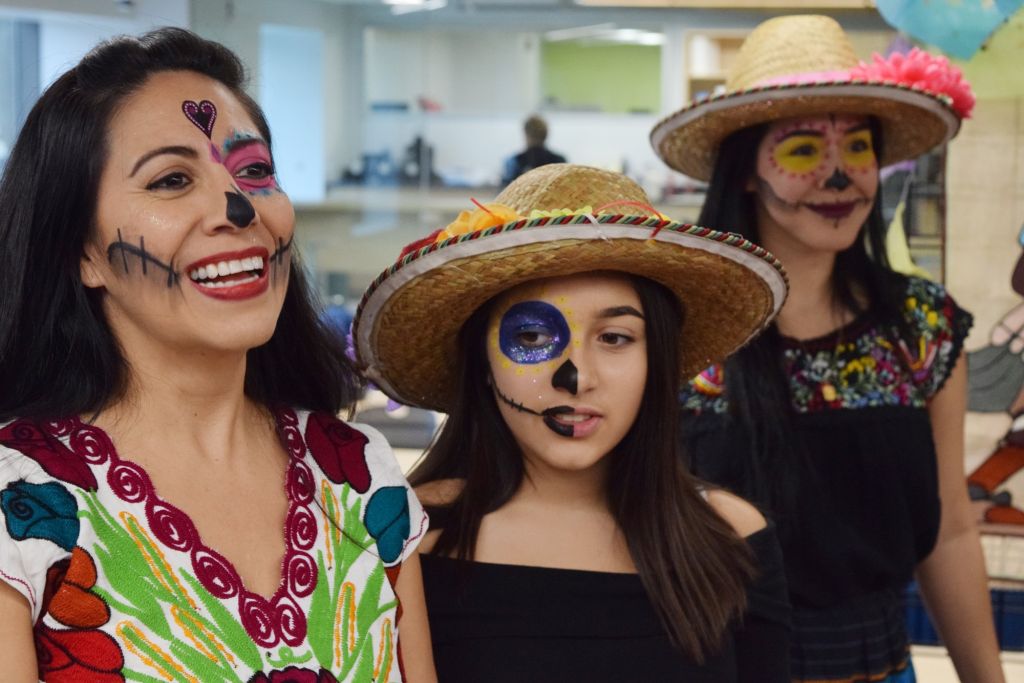 The International Education Centre was home to a Mexican event known as the Day of the Dead — a traditional week-long celebration to honour and pay respects to their deceased loved ones.

With approximately 40 people in attendance, the event took place on Nov. 6 and ran from 1 p.m. to 6 p.m. and was more of a sneak peek into the traditional holiday that occurs all over Mexico. It was organized by a first-year business management entrepreneurship student, Yazmin Gonzalez Palacio.

“This is a very traditional day in Mexico because we are celebrating and honouring our dead people,” said Palacios.

At the event there was traditional bread which was accompanied by hot chocolate. In Mexico it is customary to eat what is called “pan de muerto,” which directly translates to, dead bread. The bread itself — which is only served during the week-long period of the festival — is very sweet and topped with sugar, and is only served specifically during the week-long period.

The actual holiday begins on Oct. 28 and lasts until Nov. 2, in which a variety of different festivities will occur.

“We start with a lighting a candle. That candle is for the people that passed away without any family or friends,” said Palacios. A few days after is when people will generally build an altar in their house, with seven levels traditionally. For each level, there is a significant meaning.

The first level bears a white cross, to signify the four cardinal points corresponding to the four elements. The cross is surrounded by flowers known as cempasuchil which have a very strong smell. As well as the candles around the cross, both of these aspects are there to help guide spirits of loved ones to find the altar.

The second level consists of skulls and other decorations. The skulls are a representation of the deceased and are generally made out of chocolate or candy for the spirits to enjoy. Hence the more common term, “sugar skulls.”

The third level consists of offerings. For example, if you had a deceased grandfather who loved to drink wine and smoke cigarettes, you would leave a bottle of wine and a pack of cigarettes for their spirit to enjoy. Food is also very common.

The fourth level has water and salts. The water is there to quench the thirst of the spirits and strengthen them for their journey back to the other world. The salts are placed on this level in a small bowl in order to ensure no spirits become corrupted.

The fifth level is where incense is placed, as a method of purifying the souls of the dead to ward off any evil spirits that may be attempting to come into our world. There are also cempasuchil flowers placed on this level for the same reason as the first level; the white flowers represent the sky while the purple flowers are the traditional color of mourning in Mexico.

The sixth level has paper ornaments which are typically purple and yellow. Made into very intricate designs, they are made to represent the union between life and death.

Level seven is where more candles are placed because the fire symbolizes love and guiding lights for the spirits.

Of the students and teachers that attended there were also several members of the Mexican-Canadian Cultural Association of Ottawa Gatineau. The members in attendance included their president, Hugo Crespo, as well as Gaby Saucedo who works out logistics, her daughter Giselle Abdulla and Sofia Vega a member of the organization. They were dressed as traditional Catrina’s and Catrin’s for the event, which is wearing calaveras (skull) make-up and traditional Mexican garments.

Gaby Saucedo was more than happy to share some interesting facts about their cultural practices.

“This is something we have practiced for centuries.”

When questioned about the importance of the holiday, she stated, “I think it is one of the most important holidays in Mexico. We are very religious in general, so this totally tied to our religion and the family of course.”

Another interesting aspect was later brought up by Sofia Vega. “In North America, at most funerals, people are dressed in black, but in Mexico, we dress very colourful, because it is a celebration when someone dies because they are moving on to heaven.”

There are in fact other traditions that remain somewhat exclusive to certain families. Of the several Mexican exchange students that were there one described what she and her family do together.

Marketing student Lily Gomez explained, “Well my family and I, we always get together and we talk about the people that are already passed away, we also buy pan de muerto and eat it while we share the stories.”

The International Education Centre was home to a Mexican event known as the Day of the Dead — a traditional week-long celebration to honour and pay respects to their deceased loved ones. With approximately 40 people in attendance, the event took place on Nov. 6 and ran from 1 p.m. to 6 p.m. and was […]

The International Education Centre was home to a Mexican event known as the Day of the Dead — a traditional week-long celebration to honour and pay respects to their deceased loved ones. With approximately 40 people in attendance, the event took place on Nov. 6 and ran from 1 p.m. to 6 p.m. and was […]