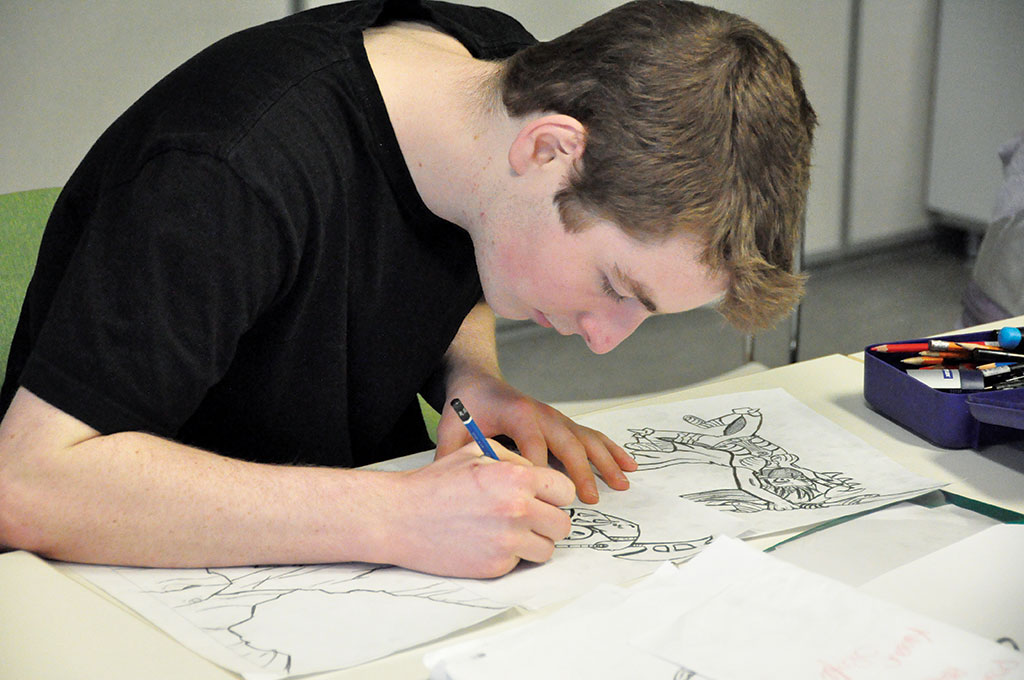 Students hailing from a variety of programs at Algonquin are coming together in the college’s comic club with the goal of producing a magazine of short comics to showcase their creative talent.

“Algonquin doesn’t have an arts magazine, something that people can look at,” said Matt Kemball, a student of graphic design and one of the club`s three head coordinators.

“With so many talented artists and writers, it was a niche that I felt the school needed filled,” said Taylor Douris, the club`s founder and a pre-animation student, “There was a group before us but they didn’t issue anything.”

“I want people to wonder why we didn’t have this before,” said Douris. “I want to build this up, have it be successful and leave it for new students to continue after we are gone.”

The previous semester was spent working out organizational issues and determining what the publication is actually going to look like. The club has now settled on a 110 page magazine of short comic stories with a focus on showcasing the artistic capabilities of Algonquin students. But the club’s head coordinators are aware of all of the obstacles that they must clear before their first successful publication.

“We don’t have enough artists,” said Douris. “A lot of artists here don’t care about getting their art out there,” added Kemball, “Or they don’t think they’re good enough, but that doesn’t matter; we are all learning and willing to teach!”

But the club`s three head coordinators, Kemball, Douris and another pre-animation student, Kieran O`Boyle are willing to do any work necessary to see their magazine through to publication. “We are prepared to fill-in all the cracks, “ said Douris, “We can jump in on any project that needs help, this magazine will happen. “

Despite the current lack of artists, the club has laid out an official plan for publication from writing and concept art to penciling and lettering, the intended schedule was detailed in eight steps to finish their first issue before the end of this semester.

The club`s first story meeting included a variety of pitches to be included in the upcoming publication. The potential stories range from a funny pun-filled page depicting a gathering of blood cells of different type , to a serious series following the adventures of a telepathic detective set in late 19th century London.

Although they were outnumbered by the writers in the room, there were a diversity of styles on display to be included in the magazine. Acrylic paint that could be scanned, digital techniques using a variety of software and classic pencil sketches were all shown to the group and admired.