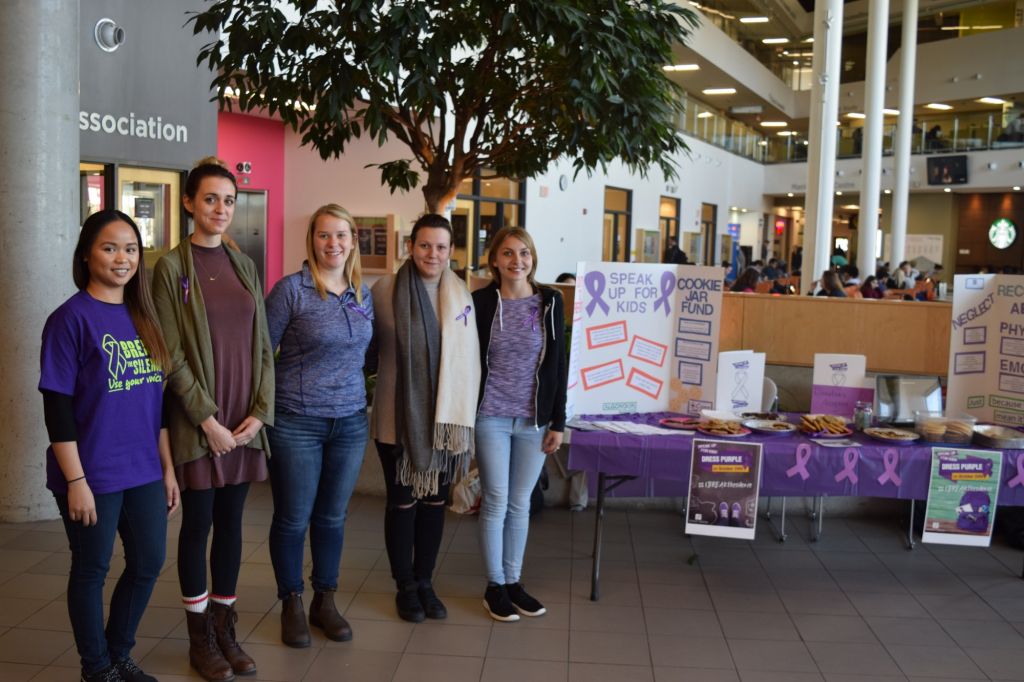 For third-year child and youth care students raising money for the Children’s Aid Society of Ottawa’s Purple Ribbon Campaign, it’s not about the amount raised; it’s about the awareness they can create.

There were eight groups of these students set up with tables in different areas across campus on Oct. 12 and six more on Oct. 13. All were raising funds and awareness for the Purple Ribbon Campaign Cookie Jar Fund, which aims to create awareness and support to prevent child abuse and neglect.

Larissa Beberdam, a third-year with the group in Student Commons, was surprised and moved when a man approached their table just after they set up, and shared that he had experienced abuse as a child.

The man was very interested in becoming an advocate for Children’s Aid Society, and the students referred him to the organization directly for information on how he could become more involved.

“He left with a smile on his face that he didn’t have when he walked up to the table; that was a nice feeling,” Beberdam said.

Overall, she felt that her group was able to make a real difference with their efforts.

“Whether people have had [abusive] experiences themselves, or whether they have known someone and they want to help, this is a good way of getting the message out to those people,” she said. “That was a turn that I didn’t expect when we were setting up today.”

The students gave out cookies in exchange for donations along with literature regarding neglect, abuse, and the campaign in general.

“A big challenge is speaking about it in a respectful manner because it is such an important topic,” said Jordan Robert, another member of the Student Commons table, “but I think it’s been really successful today.”

This is the fourth year this fundraiser has been organized as a part of the child and youth care program.

“Our table emphasizes the subtle signs of abuse,” said Robert. “We’re highlighting our duty to report.”

The group focused specifically on the issue of people being aware of child abuse and neglect, but not reporting it, according Violet Ramalho, another student at the table.

“We want to say that it is okay to report it,” Ramalho said, “you don’t have to know everything about what’s going on.”

The Student Commons group agreed that there is a misconception among the public that reporting suspected child abuse or neglect will automatically result in that child being removed from their home, which stops a lot of people from speaking up.

The table in Student Commons managed to raise to $58.80 for the campaign in just under two hours.