College told to clean up act 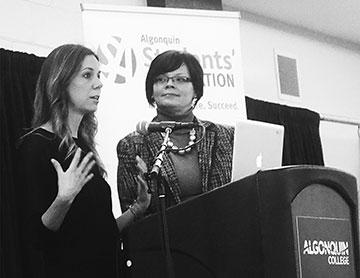 A room full of class representatives voiced their concerns regarding the services and standards of the college on March 5 during the last student forum held this year. The meeting was hosted in D-building by the Students’ Association Board.

A number of students stated that the cleanliness of the college has become a significant issue.

“Things are getting really filthy,” said Tom Sutton, animation student, while the room murmured in agreement.

“Over the course of the year, I’ve noted a real decline in the quality of custodial maintenance services at the college.”

Students admitted to noticing unclean areas on several occasions around the college that “should have been addressed.” Some specific incidences included: garbage cans in the Commons building staying full overnight, soap dispensers in P-building staying empty for more than a month and several heavily-used rooms not being cleaned often.

Daniel Brenner, police foundations student, spends most of his time in P-building and said the hallways are generally pretty clean – however, he indicated that the gym’s water fountain has been broken for some time and the gym itself is not cleaned by custodial staff.

“The gym is something that we’ve been told will not be cleaned by the staff,” said Brenner.

“We’re paying for that facility, and it’s disgusting when we have to go in and clean it ourselves.”

In an interview with the Times, Fred Maiczan, acting supervisor for caretaking and grounds, said the P-building gym is supposed to be cleaned overnight, but not necessarily during the day.

He noted that cleaning the area after every workout class would not be practical and would prove an expensive service.

“We have a very high cleaning standard as opposed to other colleges and universities,” Maiczan said.

“Where we tend to get complaints is later in the afternoon and early evening. You have to keep in mind, thousands of students have gone through the buildings by that time, and it is not realistic to clean the buildings multiple times.”

The physical resources department is currently responsible for all the maintenance and cleaning services at Algonquin. They can be reached at extension 7710 to address any inquiries about the college’s upkeep.

Several students at the forum said they had already called and received no reply.

Maiczan was honest about the fact that the client service representatives at the service desk are not technically trained and sometimes do not know how to address a maintenance issue. In that case, they would take the information and relay it to the appropriate party.

Currently, no one is permanently filling the position.

“We’re going through a bit of a transition,” said Maiczan, who left the position when the previous supervisor of caretaking and grounds retired. He assured that this has nothing to do with the recent complaints.

According to the Students’ Association website, Sherline Pieris has contacted physical resources to rectify the issues brought up at the forum.