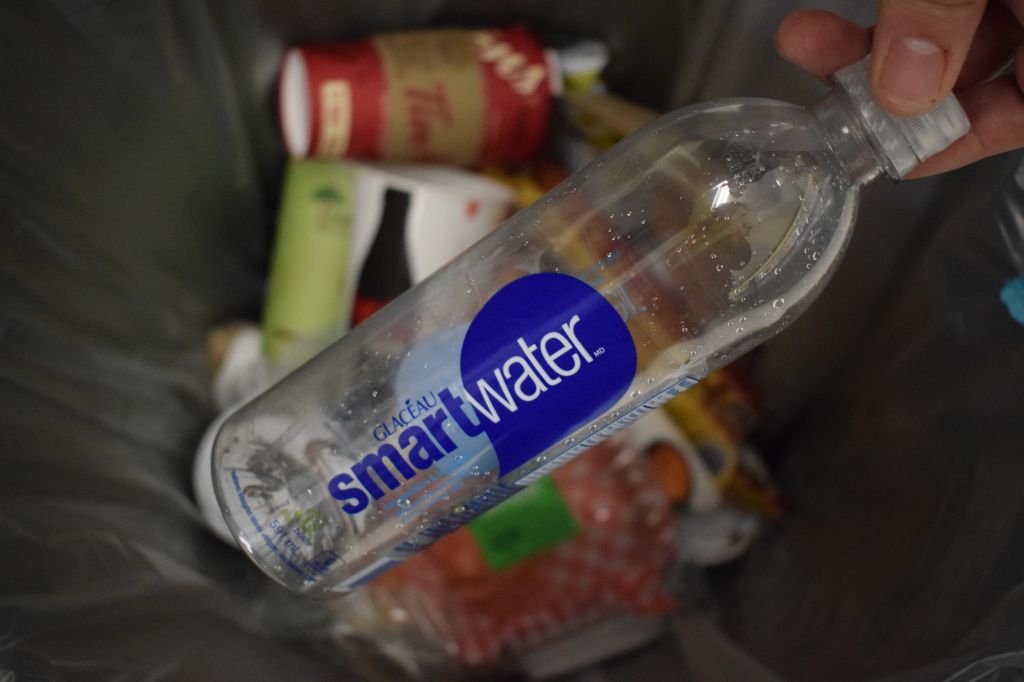 Water bottles are made to be recycled but they too often end up in the college’s garbage mix.

Currently, there are 30 refrigerated bottle filling stations at the Woodroffe campus, after the Algonquin Students’ Association funded a drinking fountain replacement project to update older fountains.

More recently, the Algonquin SA has taken steps to address the growing issue of plastic pollution by removing plastic straws from the SA-owned Starbucks.

Dejanelle Simon, current SA president, said she would stand behind a plastic water bottle ban “if this is what the students want.” She explains that the SA exists to better represent students and SA policies and priorities come directly from student feedback.

Over the last 12 months Algonquin’s Woodroffe campus sold over 13,000 water bottles in vending machines and nearly 10,000 bottles at Woodroffe’s food service locations, according to Mary Baxter, general manager of food services. This does not include any of the water bottles sold at Algonquin’s Perth and Pembroke campuses.

When asked about the decision to continue selling plastic water bottles, Baxter provided a statement on behalf of food services.

“Algonquin College Food Services has reviewed the option of discontinuing the sale of plastic water bottles. We continually review our sustainable practices, and are committed to reducing the impact we have on the environment through providing options. Our Food Service locations offer alternative packaged water. There are also a number of water bottle filling stations across campus. Food Services encourages those that choose any plastic container to recycle in the appropriate way.”

Meanwhile, Canadian colleges and universities are banning the bottle in order to lower carbon footprints and reduce the amount of single-use plastics polluting the planet.

The University of Winnipeg became the first Canadian university to ban the bottle in 2009. The decision came after a referendum resulted in the majority of students and the students’ association voting in favour of the ban.

In 2010, a water bottle survey was posted on Algonquin’s website in order to understand purchasing habits and opinions surrounding the sale of bottled water at the college. Unfortunately, the results of this survey could not be located by the college.

This year, McGill joined the nearly 15 other Canadian schools banning the bottle. After several years of student advocacy, McGill’s undergraduate, post graduate and MacDonald campus student societies accomplished their common goal to ban the bottle. By May 2019, the school will not be selling non-carbonated water in retail or vending machine locations on its campuses with plans to reduce the use of bottled water at its events.

Dasani and Glacéau Smartwater make up most of the bottles currently being sold at Algonquin, and though they are recyclable and made of up to 30 per cent renewable materials, they will only stay out of landfills and waterways if the bottles are recycled properly.

Yet, according to data obtained by The Guardian, less than half of the million plastic bottles purchased globally every minute were collected for recycling in 2016 and a mere seven per cent of those collected were turned into new bottles.

Coca-Cola, parent company of Dasani and Glacéau Smartwater, was recently named the greatest plastic polluter globally by the 2018 Global Brand Audit Report published by Break Free From Plastic. The report was published after nearly 10,000 volunteers for Break Free From Plastic participated in 239 cleanups across 42 countries in an effort to hold corporations accountable for plastic pollution.

Algonquin’s Five-Year Master Development Plan for the Woodroffe campus, published in 2015, outlines the college’s stance on current issues and opportunities for evolution with a focus on sustainability and design. Feedback from students and staff showed that “sustainability is important” and thought there was a need to “improve recycling and composting.”

However, the sale of single-use plastic water bottles was not mentioned in the 80-page document.