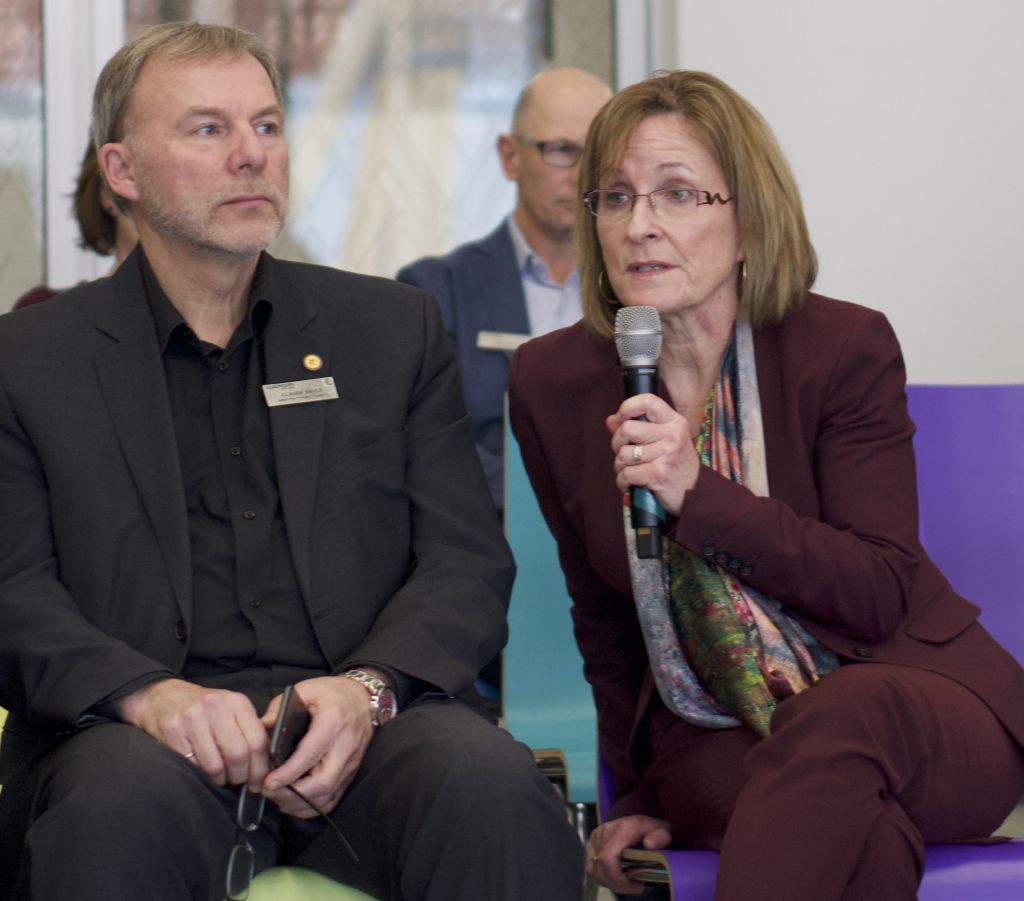 President Cheryl Jensen is not backing down against those who oppose a smoke-free campus, including the college’s Students Association.

Algonquin students and employees from all three campuses met in the Indigenous Commons for a Smoke-Free Forum hosted by the college on Dec. 7. The college wanted to get feedback before a permanent policy takes place on Jan. 1 to ban smoking on campus property.

“As your president I will tell you that I am saying that we will be smoke-free,” said college president Cheryl Jensen. “It’s just a matter of how we get there, how we take what our Students’ Association has approached us on an alternate policy and how we can come to some compromise meets the needs of everybody.”

Jensen made it clear at the start of the forum that her position is for the campus to become smoke-free on Jan. 1.

SA President Deijanelle Simon told the forum and a press conference after that she and the board oppose a total ban on smoking.

“The message from students is clear; the majority of students, both smokers and non-smokers, do not support the idea of a smoke-free campus but would prefer to have enforced, designated areas to smoke.”

The college and the SA have held a number of consultations and surveys since the start of the interim smoke-free campus policy, and the majority of students and staff who participated have expressed negative feelings toward a smoking ban on campus.

Out of the surveys that were conducted, the majority of voters, 46 per cent, felt negative about the smoking ban. Eighty per cent of the voters were students, with 70 per cent of them being non-smokers.

And others claimed the consultation felt more like a decision than a discussion.

“I’m not sure what problem is we’re trying to solve with this policy, with the amount of the opposition that we’ve heard that’s clear here today. It doesn’t feel like a consultation even though that’s what we’re calling it,” said Karl Houlihan, SA director. “We’ve [the college] already stood up and said this is happening even if everybody likes it or not.”

An online survey with 2,745 respondents was launched by the college on Nov. 6. 10 per cent of the people who answered live in residence which is on campus property. The main concern that those students pleaded for was their safety; those who live in residence and choose to go for a smoke in the middle of the night feel unsafe.

Health and safety concerns were also brought up during the meeting, particularly related to second-hand smoke. The main solution that most people agreed on — and that the SA proposed — were designated smoking areas away from major entrances and high-traffic areas.

“I am a severe asthmatic,” said Matthew Regnier, SA director. “Smoke is very harmful to me. After consulting with thousands of students on all three campuses, there’s no-way I can sit and support a smoke-free campus, even though coming to E-building sometimes I do breathe in smoke and it does affect me a little bit.

“However, I can support a designated area that I can come into campus at any door and not have to breathe it in.”

Students were not the only ones who had their voices heard. Some faculty members also voiced their opinions, including lifetime non-smoker and support staff union president Christine Kelsey. Kelsey was concerned that the forum didn’t feel like a consultation and more of a decision being announced.

“I am a non-smoker and have always been a non-smoker. I am not sure that a ‘non-smoking on campus’ is necessarily the right way to go,” said Kelsey. “I’m very concerned about the accommodation of the people that do smoke, it is an addiction so it’s not something they can just stop doing. Even with cessation programs, sometimes it can take years.”

Time-management is also a concern for smokers, who feel that they won’t have enough time with the 10-15 minute timed breaks from class to go off-campus to have a smoke, especially with inclement weather.

Many questions and concerns were brought to the college’s attention during the consultation.

“This is a consultation to get feedback and as I said on the news and I responded to the SA, that after this final consultation period, we will sit down and take a look at what our policies look like,” said Jensen.

The SA made it clear during their press conference that student’s are adults and should be treated as such under provincial law.

With the smoking ban set to take place in less than a month, Jensen believes that there are still “a good number of the people at the college that are supporting smoke-free,” yet the majority of feedback shows it to be negative.

Friday’s consultation can be seen in its entirety at

President Cheryl Jensen is not backing down against those who oppose a smoke-free campus, including the college’s Students Association. Algonquin students and employees from all three campuses met in the Indigenous Commons for a Smoke-Free Forum hosted by the college on Dec. 7. The college wanted to get feedback before a permanent policy takes place […]

President Cheryl Jensen is not backing down against those who oppose a smoke-free campus, including the college’s Students Association. Algonquin students and employees from all three campuses met in the Indigenous Commons for a Smoke-Free Forum hosted by the college on Dec. 7. The college wanted to get feedback before a permanent policy takes place […]