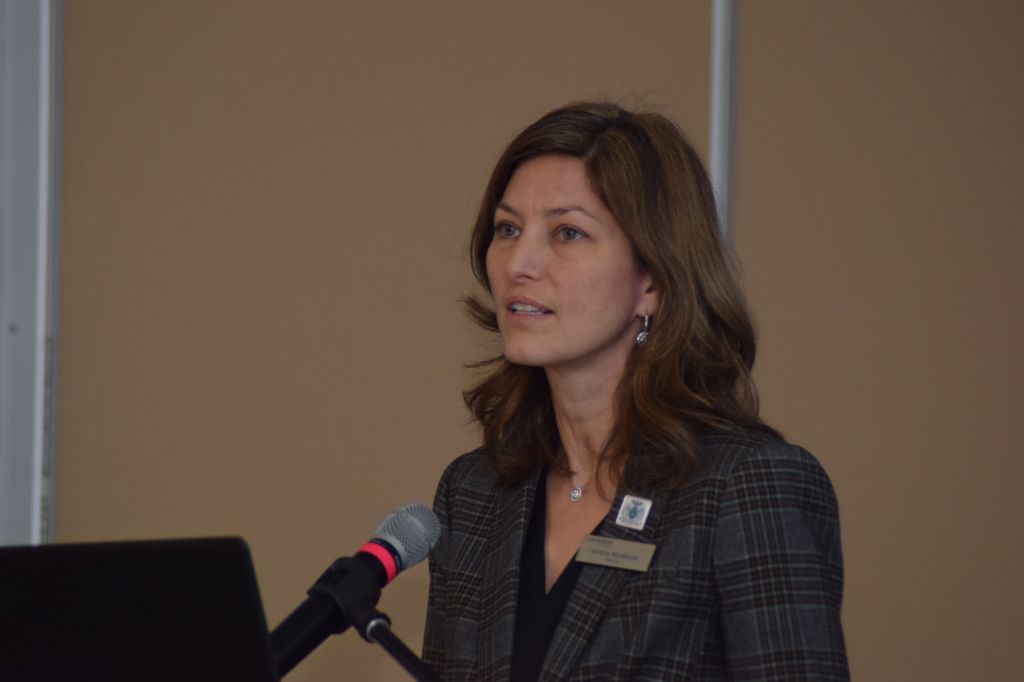 Registrar Krista Pearson presents the 2018-19 tuition and fees schedule to the Board of Governors on Dec. 11. Governors approved the new schedule, which is set to hike tuition by $88 for the average student next September. Photo credit: Devyn Barrie

The college will again increase standard tuition next September by the maximum three per cent, or an average of about $88 per student, but opted to freeze the compulsory ancillary fees under its control that total about $900.

The hike is the maximum allowable by the provincial government.

But unlike last September, which saw an increase to compulsory ancillary fees equal to $179.38, there will be no increase to fees this year, except for the U-Pass. The transit pass will increase by $5.06 to $207.52 in September in an increase fixed by the college’s contract with the City of Ottawa.

Accounting for the U-Pass increase, total fees will effectively rise .64 per cent next year.

Algonquin has the highest fees in the province, which Laura Stanbra, vice-president of Student Services, said prompted the fee freeze.

“We are very mindful of how we stand in the province and that was a deliberate act…we have an allowable increase of 20 per cent so we are well below,” Stanbra said at the Dec. 11 BOG meeting.

The Students’ Association charges nearly three-quarters of the ancillary fees and their board already approved the increase. The college collects the fees on behalf of the SA.

The college is betting on higher enrolment, particularly in international students, next year for its 2018-19 budget assumptions, ahead of the full budget presentation in February.

In the fall semester, the college experienced record enrolment for full-time post-secondary and graduate certificate enrolments, with 18,758 net registrations by late September – 3.8 per cent higher than the same period a year earlier.

Next year, the college expects total enrolment to increase about one per cent – including a 29.8 per cent increase to international enrolment.

In 2019-20, enrolment is projected to increase 1.4 per cent, including 10 per cent more international students. Again, projections for 2019-20 state there will be a three per cent hike to tuition but no fee increases.

Despite annual increases, the college is still market competitive for both domestic and international tuition fees, said Registrar Krista Pearson.

Gov. James Robblee asked if increasing tuition has the potential to drive away students, but Pearson said the college doesn’t know.

“We do not know in any concrete way if our fees are a singular deterrent,” she said. She also noted that it isn’t clear how many students are coming to Algonquin as a direct result of OSAP’s so-called free tuition.

“How many of them would have applied anyway? We don’t know that difference,” she said.