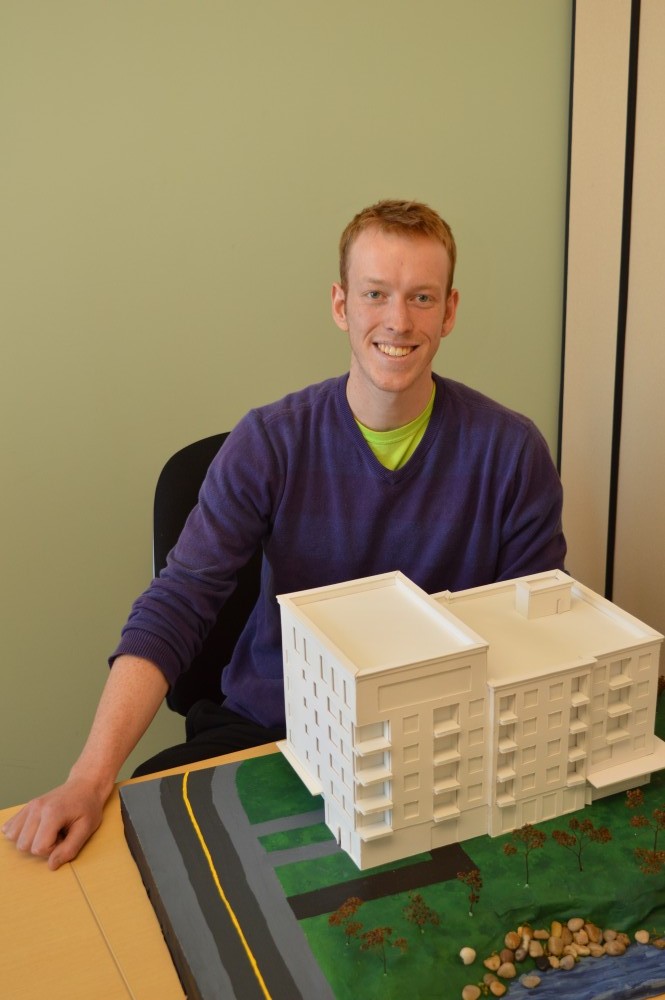 From vintage toilet paper ads to underground farms, Algonquin students are bursting with innovative ideas for The Isles, a new eco-friendly community planned for the Ottawa River.

Windmill Development Group, the company building The Isles, partnered with the college to create learning opportunities for students during the 10 to 15-year lifespan of the project.

“It’s kind of cool for them to be at the leading edge of a project,” said Richard Briginshaw, co-ordinator of the green architecture program.

To create The Isles, Windmill will transform the industrial lands at Chaudière and Albert Islands and parts of Gatineau, Que. into a green community where people can live, work and play.

Briginshaw’s third-year architectural technology students are designing hypothetical buildings for The Isles as a final class project. They finished the preliminary designs in December and now they’re fleshing out details like building materials and lighting systems.

“It’s kind of the ultimate test,” said Russell Robertson, one of Briginshaw’s students.

Windmill gave the students data, reports and site plans to work with. While the company probably won’t adopt the students’ designs, they may be inspired by their ideas.

Windmill wants The Isles to be one of the greenest urban communities in the world. With this in mind, the condo complex designed by architectural technology students Martin Somers, Wilborn Perez, Connor Gagnon and Nicholas Winn has an urban farm in the basement.

The group’s intricate wooden model was expensive and time-consuming to build.

“It was a hard month, but nothing worthwhile is easy,” said Somers.

One of the students’ challenges was incorporating some of the existing factory buildings into their plans.

The islands have a long history. For 6,000 years the Chaudière Falls has been a sacred site for the Algonquin and other First Nations.

The islands were also key sites for the lumber and pulp and paper industries. The Chaudière Falls are still used today to generate hydroelectric power.

Instead of putting the islands’ stories in a museum, the first draft of the museum studies students’ plan suggests sprinkling them all over the site. Some of their ideas include strike signs outside lumber tycoon E.B. Eddy’s factory and a miniature paper machine.

At Algonquin, faculty and staff are still exploring possible projects for The Isles, from horticulture to hotel management.

The college is also considering a physical presence on the site. There could be co-op or small businesses opportunities for students.

There’s also talk of building a training hotel for the hospitality and tourism program, an idea that Algonquin’s president, Cheryl Jensen, is particularly excited about.

“That’s a big, big question mark,” said Elizabeth Costello of Echo Marcom Services regarding the hotel. “It’s just an idea at this point.”

Windmill asked other post-secondary schools to be learning partners, but so far Algonquin is the only one that accepted.

According to Jensen, this is because The Isles fit the college’s commitment to applied research and giving back to the community.

“We want to give our students real-life experience wherever we can,” Jensen said.