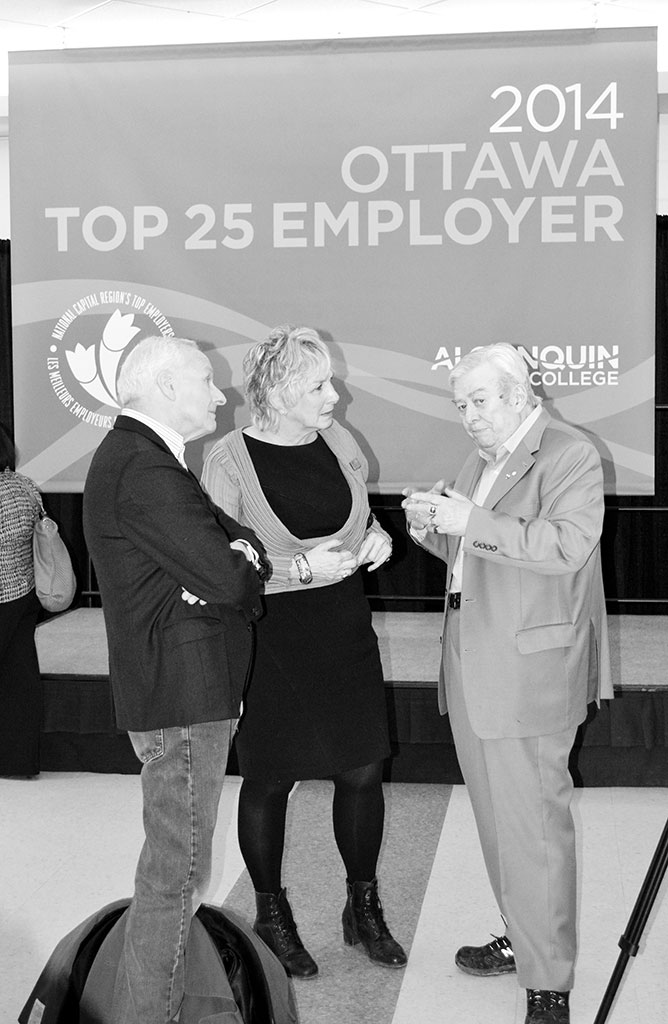 Algonquin has been named one of the National Capital Region’s 25 top employers.

Max Keeping, an active member of the Algonquin College Foundation Board, announced the award in a secret conference to faculty and staff Feb. 4 in the Marketplace Food Court on the Woodroffe campus.

“This award is a reflection of your work, your commitment and your determination,” said Keeping. “The leadership of Algonquin in the academic field is so far ahead of many similar institutions across the province and now across the country. You are being recognized more and more by your peers and your community.”

Upon receiving the trophy, president of the college, Kent MacDonald offered to pass it around so everyone had a chance hold it. The two men congratulated the hundred staff in attendance and the rest that couldn’t be there for their help in winning the award.

“I have the privilege of speaking on behalf of the college all the time. It’s one of my jobs to be a cheerleader,” said MacDonald. “I’ve said it since the first day I started as president that this is the most important public organization in the city. I’m convinced of that.”

Canada’s Top 100 Employers is the organization giving this title to the college. The decision is based on a regional competition. It recognizes employers in parts of the country that are leaders in their industries that offer exceptional places to work. None of the editors attended the event.

The crowd was told not to mention anything until the following night when the announcement was publicized. The crowd audibly groaned at this bit of news.

“You’ve been invited to come here but keep it a secret. How the hell are you supposed to keep a secret on a campus this large?” said Keeping. “This announcement will be tough to keep to yourself but you can’t tell anyone for the next 18 hours. No Twitter, no Facebook, no nothing,”

There were people questioning the event after MacDonald put up pictures on his Twitter account of mugs that had sticky notes with question marks on them covering the award name. Two women in particular had been asking MacDonald exactly what this meant.

Helena Merriam, coordinator of the library and information technician program and Cat Baron, professor of the police and public safety institute department were both invited on stage to receive the first mugs.

“What we have for all of you here today, and I hope you use it proudly, is a mug,” said MacDonald while someone pulled back a curtain revealing free coffee and mugs.

Everyone in attendance was invited to sign a  banner board with the name of the school and the award name which will be placed somewhere on the Woodroffe campus.