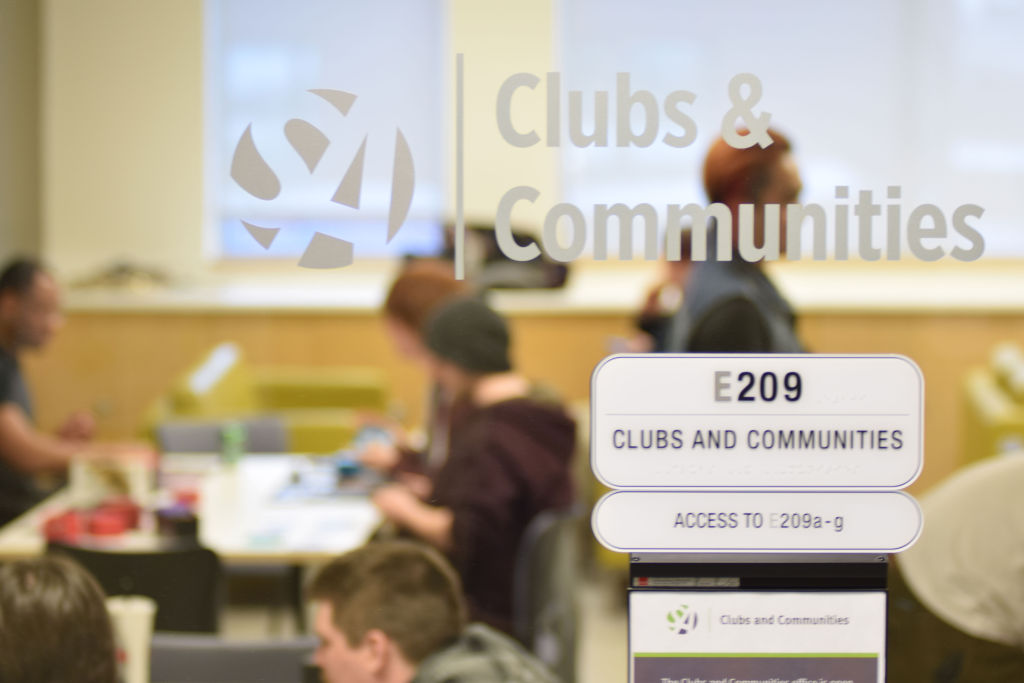 Students play games in the clubs room. Club oversight has improved since a former MSA executive was arrested on terrorism charges -- but is it enough?

How former Algonquin students were able to carry out any alleged activities at Algonquin for months or perhaps years, remains a question that the college and the SA are reluctant to discuss in much detail.
There are 44 clubs at the college presently, ranging in subjects from religion to craft to advocacy groups. Although each group is an opportunity for extracurricular activities or a chance to socialize with other like-minded students, just how much oversight is there for Algonquin clubs?
According to Patrick Newell, the SA’s clubs coordinator, the application to create a new club or to request funding is very simple and available on the website.
As long as it falls underneath the funding guidelines and that funding is still available, clubs can receive up to $500 per semester and up to $1,000 per academic year, in total.
“Clubs have a very wide variety of ideas – whether they want to use the money for buying ping pong tables, video games, food for an event – I try not to say no to clubs as much as possible,” Newell said.
The only way clubs can be reimbursed, however, is through providing receipts.
Sometimes Newell will do the purchasing on his own if it’s for pricier purchases that he knows will be difficult for students to pay for upfront on their own.
The video gaming club’s PS4 is a good example.
When it comes to documentation, Newell says he is required to keep records archived for up to five years since they are a not-for-profit. He confirmed that they do keep documents on file of club members each semester, activity reports and funding – and that he is the one who oversees it now.
Newell said that he was willing and able to provide this information to the Times but had not sent them before deadline.
When ever the SA is approached to approve a club, Newell said they look up applicants on Genesis, the student database, to make sure that there are at least 15 full-time activity fee-paying students who submit the Club Recognition Form to create a club.
Part-time students cannot be official members of Algonquin clubs and they cannot receive funding or be an executive, but the activities are often open to non activity fee-paying students and staff alike.
This is the screening process for creating a club.
As long as a club doesn’t break any of these guidelines and has at least 15 members he will accept the application, Newell said.
Clubs also have to complete two activity reports a year. They are done sitting face-to-face at the end of the semester, and cover activities that have taken place and what the plans are for the future.
Newell says, however, that activity logs were only implemented in 2014. The level of oversight on club activity before then remains unclear.
The Algonquin SA is one of very few community colleges that have a full-time clubs and communities coordinator.
“I think it is definitely beneficial,” Newell said. “I feel a little biased about that because it’s my job, but it helps grow this department and the student life on campus.”
Newell says this is because he has full control and full oversight.
“I am the only person in this department,” he said, “so I know everything that happens with clubs… I can see everything that happens.”
He has always believed clubs are one of the strongest parts of student life on campus since they are solely student-run.
“They are students stepping forward saying this is what we’re interested in. This is what we’re passionate about and this is what we want to do.”
However,when asked how any criminal activity is avoided at the clubs, Newell said, “I hope the club criteria is strong enough.”
“There is definitely a level of trust I have within clubs, as they have signed an agreement to follow all these guidelines. If they broke those then the disciplinary act will be followed. The first one is that they’ll receive a written warning from me.
So if they post posters in an area they’re not supposed to, I’ll email them with a warning, and so on and so on.”
When asked how he is able to make sure guidelines are followed, Newell said he is here every day.
“I feel confident that the club program that I have built at this institution protects not only the Students’ Association but the students that partake in club activities.”
The first time a full-time clubs coordinator was hired by the SA was in 2012, and he worked for a year and a half. This was Ferris Lehn, who left Algonquin in 2014 to start work at University of Ottawa. And before that Don McRae – who still works at the college but as the manager of administrative services at the SA – was overseeing the clubs but not in a full-time role.