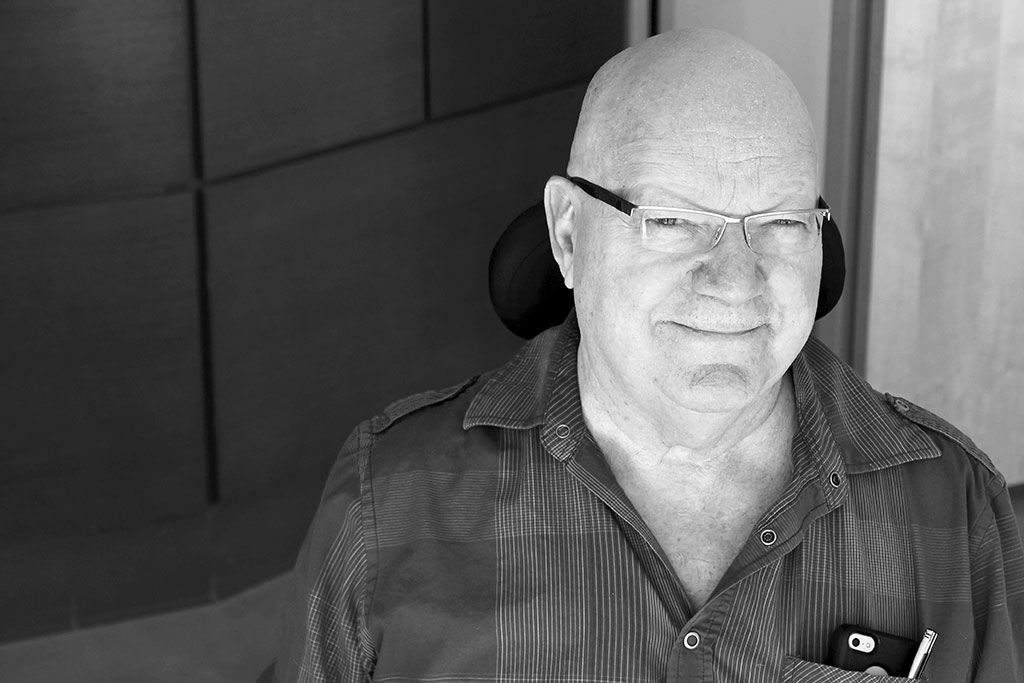 Wayne McIntyre has been crowned CTV’s Most Amazing Person. He has also done a great deal to help Algonquin College. This retiredprofessor is also suffering from cancer for the fourth time.

A Facebook tribute page with hundreds of warm memories is one of many things Wayne McIntyre will leave behind.

Typically made after somebody has died, in McIntyre’s case, friends and family wanted to share their thoughts to make him feel appreciated after hearing he was battling cancer for the fourth time.

Not that McIntyre has had any shortage of recognition.

Just within the last few years, McIntyre has been honoured with a Celebration of People Award, the President’s Star here at the college and most recently, CTV Ottawa’s People’s Choice Award for the Most Amazing Person.

With a staggering 6,000 votes, nearly triple the amount of the next closest nominee, McIntyre won the award with his son and daughter in attendance as well as the president of the college, Kent MacDonald.

“He is quite frankly an amazing person,” said MacDonald. “We all have challenges, yet he is always smiling and looking to find solutions. He is a reminder of what is good in this world. Negativity can’t and won’t bring him down.”

“It was an emotional evening,” McIntyre said. “I know a lot of people in the community and it was really nice to get that recognition.”

Many past students credit McIntyre with turning their lives around. He would argue that his students did the same for him.

In 1976, McIntyre fought cancer for the first time in the form of a brain tumour which left him immobile on his left side. During this time, McIntyre was working as a general manager at Canadian Tire, hiring many Algonquin students.

The students suggested he visit their class as a guest speaker.

“Next thing you know, I got invited again and the chair asked me to teach one course. I started one course and then another and a position became available and I took it,” said McIntyre.

“I took a big drop in salary but it’s not about money. I love the college. It’s my family,” said McIntyre. “Almost every day I’m here, whether I’m teaching or not, I come in and say hi to my friends. When you work with people, you don’t forget them.”

McIntyre fell in love with teaching after starting full-time in the School of Business in 1985.

“I like teaching courses that allow me to help students grow. I think the kids are enjoying it. I know I am,” he said. “You see them walk across the stage on graduation day. To me, that’s better than any paycheque you can get and it always has been.”

McIntyre fought cancer once again in 1992, this time in his stomach.

In 1998, he was made chair of marketing management studies before being made associate dean of the School of Business in 2000, working closely with dean and future president, MacDonald.

MacDonald and McIntyre have remained close. The pair have breakfast together once every two months.

“He is an inspiration,” said MacDonald. “He consistently puts student needs in the forefront of his decisions and he is committed to their success.”

In 2004, McIntyre battled cancer for the third time, moving to the bones in his right wrist.

“It was a little challenging because it was my right hand. I have no movement on my left side from the brain cancer, so this is all I have,” McIntyre said with a laugh. “But I beat that too.”

In 2007, McIntyre decided he was ready to retire. However MacDonald, vice president of student services and development at the time, made him an offer he couldn’t refuse.

“Kent told me, ‘You’re not ready to retire. I’ve got a job for you. It’s about students and you’d fit the job perfectly.’”

That same year, McIntyre began his position as director of student services, where he stayed for four years before retiring in 2011 for a year.

“I went to Florida in the winter and did everything else that I thought I wanted but I wasn’t really there,” said McIntyre. “My heart was here. It’s my family. I was lost.”

McIntyre contracted cancer once again in 2013, this time in his bladder.

It was this fourth fight that inspired the creation of a Facebook tribute page.

“I didn’t want it. I told the people who made it that I wasn’t interested. I was comfortable, I had been there before. I didn’t want to draw attention,” said McIntyre.

“After they did it, I have to be honest, every day that I’d go for my chemo, I’d bring my iPad with me and I’d read because every day there would three or four people posting. They really gave something to me,” he said. “It goes to show you that I can learn from my students just as much as they can learn from me.”

“I believe in giving back. I know that sounds corny, but I honestly do.”

McIntyre participated in the Terry Fox Run for the 31st time last September. He has raised over $90,000 himself over this time, with a final goal of $100,000.

He was a committee member for the General Arts and Science Big Hit Bursary Dance in February, a chair of the Bereaved Families of Ontario, and is planning an event in April at Centrepointe Theatre.

“I’ll be calling up my Algonquin friends because it’s so close,” said McIntyre. “Then I’m going to take the summer off and rest a little.”

McIntyre is now doing well, saying his most recent results in February are looking much better than in November and December.

“I said many years ago, ‘Cancer will never define me. I will define it,’” he said. “So far, that’s worked for me.”

After having lost his parents, sister and twin brother to the disease, McIntyre is still strong.

“That’s four people. I learned, especially from my brother. He had a brain tumour, similar to mine, and he only had six months.”

McIntyre credits his positive attitude and quality of life to the college.

“Yeah, I’m 70-years-old, but I feel 50,” he said. “It’s been an interesting life, challenging sometimes, but very satisfying. God gives us a reason for everything. I have no idea why he’s kept me here but I’m glad that he has.”