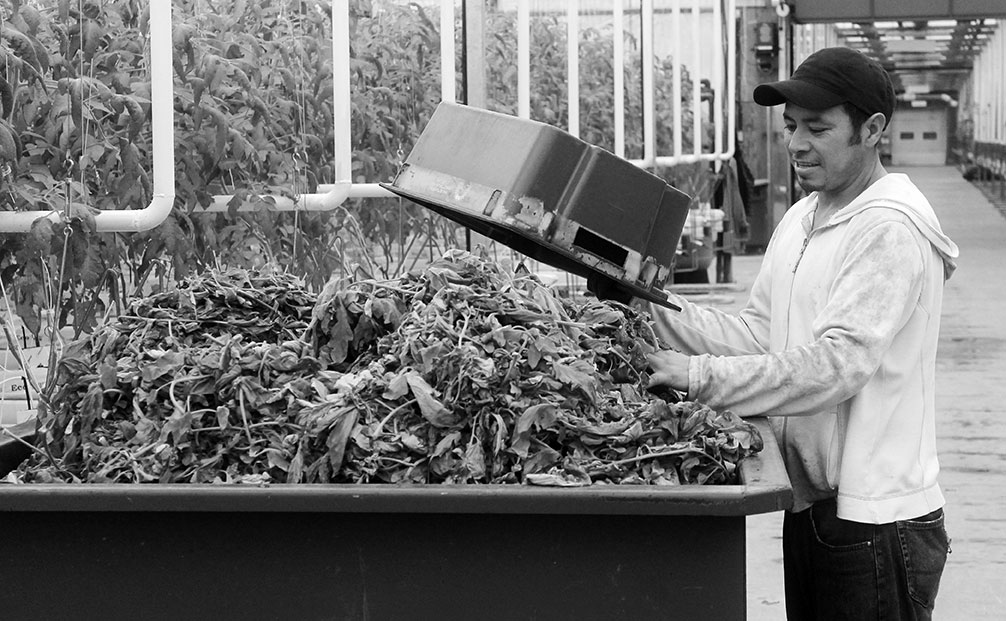 “Ten years before local was cool I was advertising that I was local,” said Bob Mitchell, the  owner of SunTech Greenhouses, a small tomato greenhouse operation in Manotick.

Behind his small office are the three greenhouses: hot, humid buildings which are extremely clean and free of insects except for the bees kept in a box for pollination. Yet he said customers will still come in and ask, “Are these tomatoes local?”

His company is one of many local growers selling to Algonquin, which is taking “buy local” very seriously.

Algonquin also gets food from a source as local as they come. The horticultural industries program grows food that is used by food services.

A first-year in the program, Cassandra Schalo, harvested vegetables in the fall.

“It makes me feel more in tune with the school and it makes me feel like I’m providing a healthy meal to those who may choose junk food all the time.”

Weir is a key supporter of Algonquin’s local food movement which has supported Savour Ottawa in getting the City of Ottawa’s approval for a distribution hub for local food.

He is in touch with local buyers to source his food, he said, with environmental protection and the health of students in mind.

In addressing the healthiness of local food, he highlighted a problem with industrial tomatoes.

“As the back of the truck is pulled up and people are loading things on and off the truck, the truck is still running. Diesel fuel is filling up that cavity and all the product that’s in there is sucking up diesel fuel.”

Compounding that problem are holes in the regulation of companies that want to produce cheap commodities. He pointed to the case of 33 people dying of a listeria outbreak traced to the cantaloupes of Jensen Farms in Colorado.

“[They] passed their food safety audit with flying colours,” he said. “They won’t do any jail time. And they actually didn’t do anything wrong.”

SunTech Greenhouses passed their Canadian Food Inspection Agency audit with an impressive score of 98 per cent for doing what they were already doing, he said.

Furthermore, he said the biggest boost to “buy local” was a mass recall of American eggs after a salmonella outbreak in 2010.

“Everybody said that the guy with 150 chickens — his eggs were good,” he said.