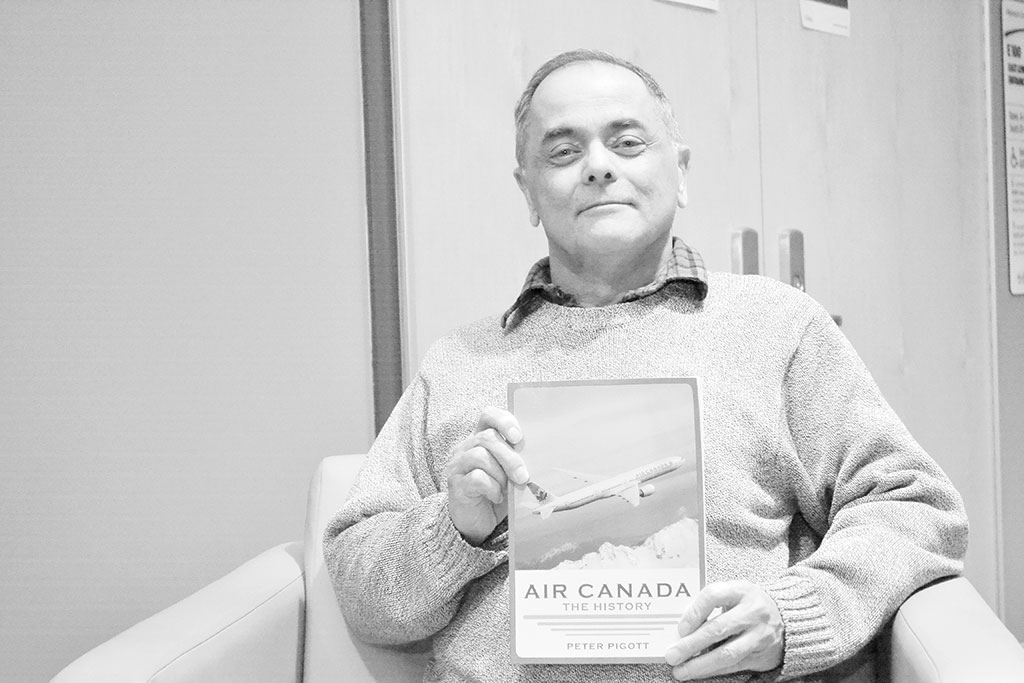 Twenty years ago when his fridge broke and he didn’t have the money to buy a new one, Algonquin professor Peter Pigott decided to start writing.

It wasn’t the first thing that had broken down that he couldn’t afford to replace, but it was the most essential. A television or a car he could live without, but his fridge was a necessity.

So the airplane enthusiast quickly sent out a fax to five different publishing companies telling them that if they would pay him $600 upfront for a new fridge, he would be willing to write them a book on aviation.

Approximately two minutes later the phone rang with a publisher on the line telling Pigott that his check was in the mail and he could start writing. Another year later, his first book was published.

On Feb. 23, 105 years after Canada’s first powered flight, the Canadian aviation author had his 18th book published, and he has now begun working on his next one, due to be released in 2015.

He began writing about aviation because he remembers looking through books on the subject and feeling like there was so much more than just the impressive photographs of planes he would constantly see. Because Pigott had been around planes and airports his entire life, he thought that he would be able to bring his knowledge and passion and fill the gap he saw.

“I grew up with planes flying over the house,” he said. “I took my first date to the airport.”

His father was a flight superintendent. Every few years they would move to a new airport, much of the time in a new country. His first book was about the Kai Tak airport in Hong Kong, which was an airport he lived near when he was young.

His two daughters grew up knowing that each one of their father’s books had paid for something. The first one paid for a new fridge, another one paid for the roof. They could walk through the house and remember what each book had paid for.

One of his daughters now works for WestJet as a flight attendant, following her father’s passion for aviation.

But Pigott isn’t just a writer. He’s also been a professor in the aviation program at Algonquin since 2007. He teaches marketing, management and ethics.

He considers ethics to be his favourite subject to teach, because he considers it the last time his students will be forced to question their career choice, and the kind of people they are going to be during it.

“It’s like a flight plan for life,” said Pigott.

He loves teaching, because he gets to teach the next generation of pilots in an industry that is constantly changing because of all the new technology that is always being invented and updated.

Pigott’s next book will be about aviation safety and security, something that has changed greatly with the advancement of technology. He says that in the past, most crashes or safety issues have been caused by mechanical failures. But in today’s planes, there are so many instruments, GPS devices and computers involved that he wonders whether the problem may be in pilots not looking out the window enough. He also wants to look into how security at airports has changed, and how many threats there are now compared to when he was growing up.

“Writing is a very solitary thing,” said Pigott. “But with teaching I get to talk and interact with these great people. It’s good, because I love them both differently.”