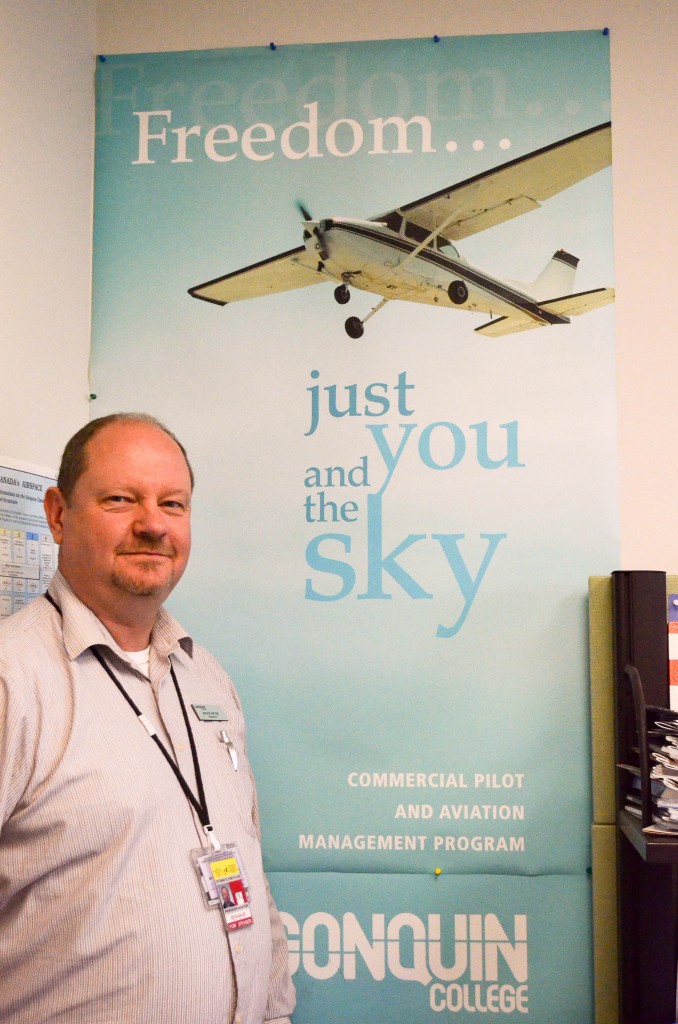 Bruce Dwyer, coordinator for the aircraft maintenance program was instrumental in acquiring the programs new learjet. It will be a great learning tool.

Through the combined efforts of Algonquin’s aircraft maintenance program and the Canada Aviation and Space Museum (CASM), students now have the ability to hone their craft on a recently-donated Learjet.

The former air ambulance, a 1976 Learjet 35, was donated by Skyservice Aviation, a company that provides chartered flights and air ambulance services. An online search of other Learjet 35s in that year range returns a selling price between $500,000 and $1 million.

“All of our students are going to benefit from this one,” said Bruce Dwyer, the program coordinator for Algonquin’s aircraft maintenance program.

Before Skyservice acquired the aircraft in the early 1990s for use as an air ambulance, it was used by its previous owners for business flights between the Maritimes and Ireland, according to Sam Cimone, President of Skyservice

The plane still has value, Cimone said, although the costs associated with keeping it in the air were too high, especially as older parts become harder to find.

“The issue is that this is an aircraft designed in the 60s, built in the very early 70s; it’s over 40 years old,” said Cimone. “We could’ve kept it, but we would have to redo the flight controls on the aircraft.

They’ve been working with the college, among other groups, for the last three or four months to try to find it an appropriate home to retire, with the aim that it continue to be of use in some way.

“It’s flown well beyond its life expectancy,” said Dwyer. “It’s served a very useful life and helped a lot of people in its career as an air ambulance and now the exciting part is that it’s starting a new career, and it’s going to help hundreds of maintenance engineers over the next 20 years that’ll work on this aircraft.”

However, the engines are set to return to duty elsewhere.

“There was certain value left to the asset, the engines being one of them. So we came to the agreement to at least give the core of the asset,” said Cimone.

The engines have been sold to another party, but there are plans for the engines to be replaced with runnable, if not airworthy, engines.

Skyservice itself has moved on to the Learjet 45, the next model up from the 35, which share the same engine type.

“Some of our mechanics have learned more on the 35s that they can now apply to the 45s today, when they do their trouble-shooting and creative thinking, than you could ever imagine,” said Cimone.

Dwyer agrees that the age of the aircraft has a minimal impact on its usefulness to the program over time.

“When you look really at aviation…you see that aircraft haven’t changed very much in the last 50 years,” said Dwyer. “They’ve made marginal improvements in the way they make them a little more efficient, or a little more aerodynamic. But they don’t operate any differently.”

“So if they understand how to fix this guy, they could go and work on a new Airbus,” he continued.

The arrival of the aircraft provides the students of the aircraft maintenance program with a valuable opportunity to work with the plane’s flight systems, hydraulics, and other mechanisms. The students are able to work on aircraft like the Learjet at the lab at CASM.

In the CASM new release, the CASM Director General Stephen Quick credits Dwyer for realizing the opportunity and pursuing it until it came to fruition.

“I kept after them, saying ‘it’s the right thing to do, and that it’ll help hundreds of people in the years to come, and the aircraft shouldn’t die in a desert somewhere and stripped for parts,” said Dwyer. “It should be starting its new life.”