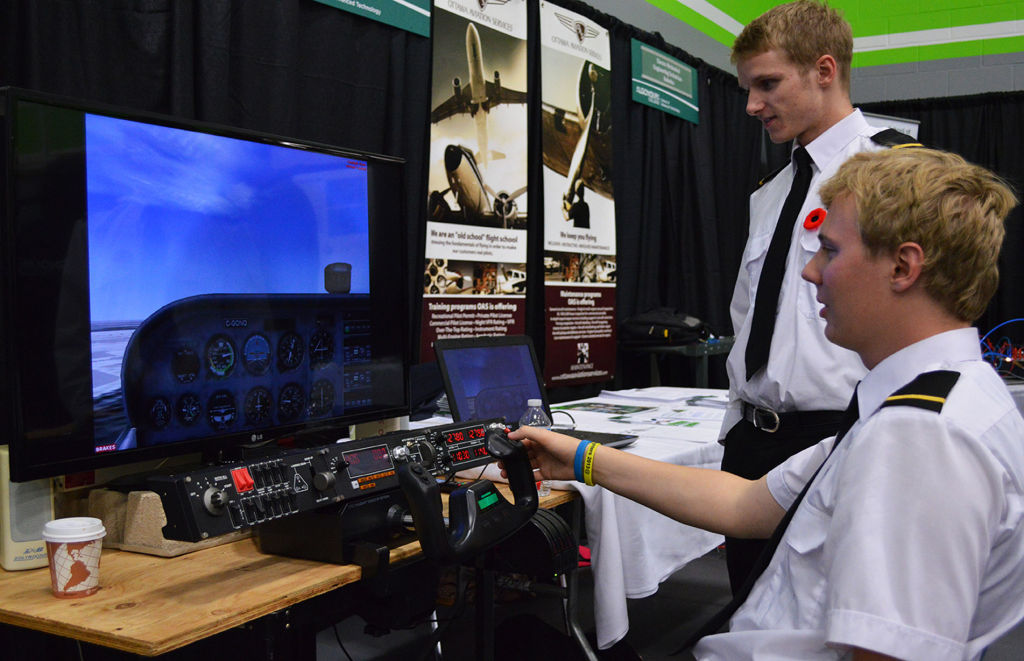 Isaac Sleingley and Logan Goulette showcase the flight simulator at the aviation booth during Algonquin's open house for future students.

Sutton McKay has ambitions to be a pilot.

The tuition however makes the young visitor to Algonquin’s open house skeptical he will be able to pay his way on his own dime.

McKay’s concern was one among hundreds of questions on the minds of the two thousand potential students who crowded the hallways, Commons and the gym to learn more about the programs they could be enrolled in next Fall.

While the majority of programs offered by Algonquin don’t cast as much as aviation management, tuition and possibility of debt were an immediate concern for students that day.

In a random survey conducted by the Times of 50 visiting high school students, 54 per cent said they were going into debt to pay for school.

“The cost of college is significantly less,” said Anne Kalil, manager of student recruitment and an organizer of the open house. She believes Algonquin has comparable bursaries and scholarships to universities.

The open house wasn’t just for high school students. Other young adults have been working to save money for their education.

Jared Loveday plans to pay for school on his own dime.

“I’ve been out of high school for a year, I’ve saved up a bit of money so it shouldn’t be a problem at all,” said Loveday.

Expense might also be offset with a part-time job. Ninety per cent of students say they will be working over the school year.

For Kalil the day marked the end of weeks of preparation but spoke to the efforts on Algonquin’s part to get the college name across the province. The open house provides people like Sutton and Loveday the chance to plan their future.

Kalil and her staff were responsible for selling the Algonquin brand and coordinating the arrival of students from Perth, Pembroke and as far as southern Ontario and west to Barry’s Bay.

“We’re pretty active to get into schools,” said one college recruitment officer. “There are 24 colleges in Ontario and we’re competing for all the same students, that’s when the unique programs set us apart.”

Sixty-four percent of students polled said they decided on a program that evening at the open house.

Regardless of whether they attend Algonquin in the Fall, 98 per cent said they though their high school had prepared them well for their post-secondary lives.