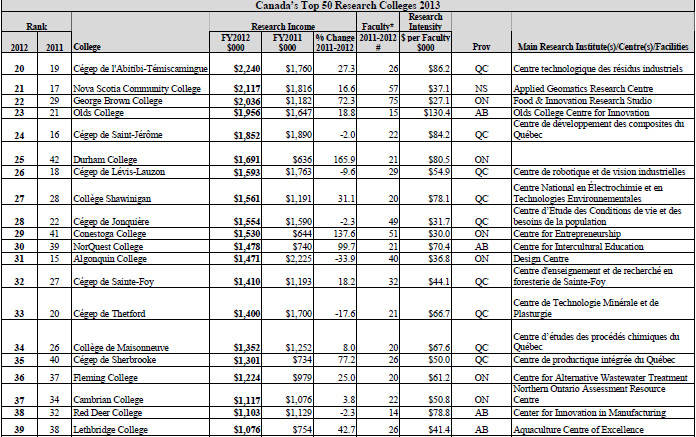 Algonquin dropped from 15th to 31st in the ranking of the top research colleges in Canada after a sharp decline in grants received.

Algonquin dropped from 15th to 31st in the ranking of the top research colleges in Canada after a sharp decline in grants received.

The college received $1.4 million in 2012, lower than the $2.2 million in 2011, according to the latest rankings. However, that is not a major concern for the college’s faculty.

“To me that’s completely the wrong thing to measure us on because it’s measuring an input,” said Mark Hoddenbagh, director of Applied Research and Innovations. “You don’t measure how much food you put in, you measure how big your muscles get.”

Hoddenbagh downplayed the college’s decline in the rankings by highlighting Algonquin’s focus on student participation, not the amount of funding they get.

“What’s important is how many students we have in research and how many companies we brought in to do research,” he said.

The college, however, actually received less funding for research and project development than the previous year, with funding going down by 33 per cent, or $750,000, according to the latest data supplied by Research Infosource Inc.

However, according to Hoddenbagh, that will likely change next year as the newly created Construction Research Centre is set to receive more funding from the Natural Sciences and Engineering Research Council of Canada (NSERC).

“I think we are going to get back into the over $2 million range because our centre will be active at that time, receiving money from NSERC and other sources,” said John Omura, project manager of the Design Centre.

Through departments like his, the college is trying to get more students and faculty involved in applied research by bringing in more projects to Algonquin.

“I think we compare very well with other colleges because, for the money we get, we support and coordinate a lot of projects,” said Omura. “We are trying to incorporate applied research into the classroom.”

Like Hoddenbagh, Omura strongly believes in the college’s ideals and the purpose of applied research at Algonquin.

“The main thing we are trying to do is to get students the real-world experience and try and help local companies in the area to improve their economic growth,” he said. “And I think we have been pretty successful at that.”