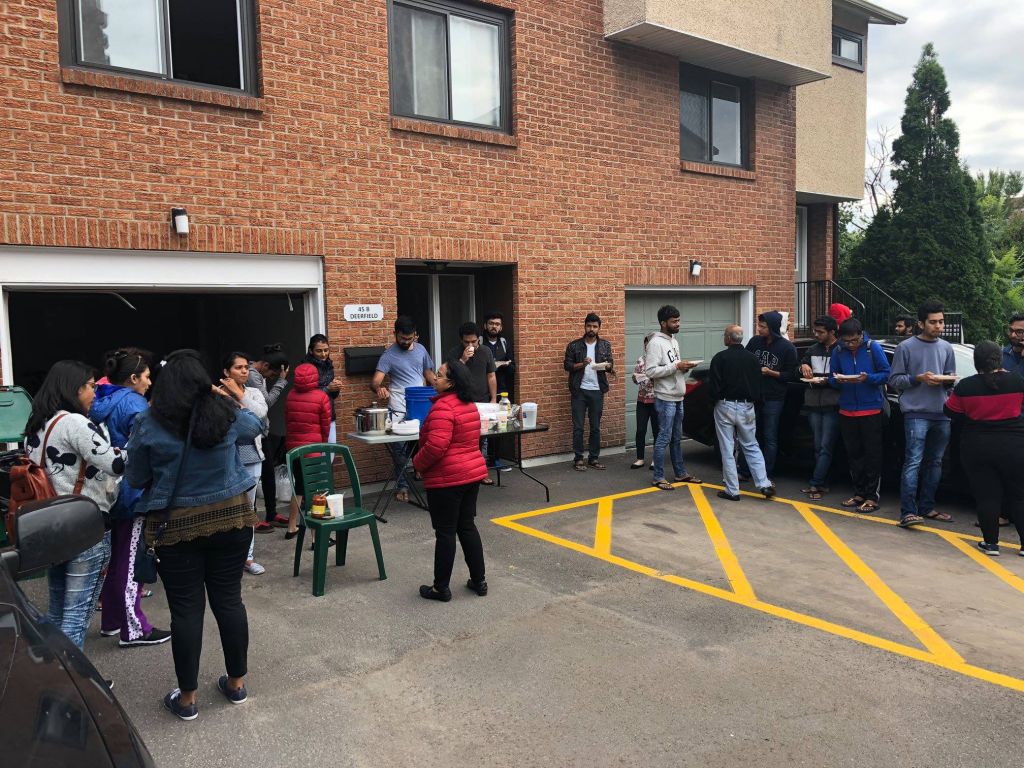 Students gather at a home on Deerfield Drive on Sept. 23 to receive a free hot meal courtesy of non-profit group, Vedic Sanskruti. This is just one group of people that stepped up in the aftermath of the tornadoes to provide relief to those affected.

Following a storm that left devastation in many parts of the Ottawa-Gatineau area on Sept. 21, the Algonquin community rallied to support those who were significantly impacted.

According to Environment Canada, the storm created six tornadoes that destroyed or damaged homes and left thousands without power, some for several days. One of those tornadoes touched down in the Craig Henry, just a few kilometres from Woodroffe campus, but it left parts of the college without power for between one and four days.

Hesham Alshamsi, a graduate of the computer system technician program in 2013, was among those who were without electricity. He saw a call for volunteers to help with food distribution on Twitter and didn’t hesitate to offer whatever he could.

He collected cooked meals from the home of Shawna Tregunna, a woman who provided significant relief after the storm, and delivered them to various communities in the Ottawa area.

For him, it was about doing the right thing when he had the means to do it.

“I came to Algonquin as an international student from Yemen, a place that is dealing with a lot of unrest right now,” he said. “I feel badly that I’m not able to help the people back home, so I feel obligated to do my part here.”

Alshamsi wasn’t the only one who felt compelled to lend a hand.

Vedic Sanskruti, a non-profit organization that promotes Indian heritage and culture in Ottawa, acts as the home away from home for international students.

Parth Shah, a first-year business intelligence system infrastructure student, is a member of this group off-campus and helped collect and hand out food to approximately 150 students outside of his friend’s house on Deerfield Drive.

Despite being affected by the storm personally, he knew that because he had a car, he had the ability to help those who were stuck.

In his view, this is something everyone should consider doing in the face of an event like this.

“People who have the resources should come together at all times, regardless of the situation, to help the community that needs them,” he said.

Kashyap Desai, the founder of this organization, spearheaded this initiative with his wife after their power came back on in Barrhaven on Sept. 23.

He bought the groceries out of his own pocket and asked his student volunteers to spread the word to those at Algonquin, Carleton and Ottawa U.

According to him, there were many international students that didn’t know what to do and didn’t have anything to eat. He acknowledged that Algonquin students were hit the hardest due to their proximity to the storm.

In this time of trouble, he wanted to make sure that the student community had someone that they could rely on.

“We took the initiative to help in any way we could,” he said. “If I had more time and resources, I would have liked to reach more than 150 students.”

Shehawah Collin, a first-year nursing student, was another exceptional volunteer. At her home in the Vanier area, she was unaffected by the storm and was able to provide relief in many ways.

She housed a family of four in her home until their relatives could come and get them, drove two students back to their homes in Toronto and Kingston and helped with cleanup efforts in neighbourhoods that were hit the hardest by the tornadoes.

Much like Alshamsi and Shah, she knew that she had the resources necessary to make a difference and she leveraged them.

“They needed help and I could provide it,” she said, “Why wouldn’t I help them?”

The college also opened its doors to the public in the following days, giving people the opportunity to charge their devices, purchase a hot meal and enjoy a complimentary cup of coffee.

Following a storm that left devastation in many parts of the Ottawa-Gatineau area on Sept. 21, the Algonquin community rallied to support those who were significantly impacted. According to Environment Canada, the storm created six tornadoes that destroyed or damaged homes and left thousands without power, some for several days. One of those tornadoes touched […]

Following a storm that left devastation in many parts of the Ottawa-Gatineau area on Sept. 21, the Algonquin community rallied to support those who were significantly impacted. According to Environment Canada, the storm created six tornadoes that destroyed or damaged homes and left thousands without power, some for several days. One of those tornadoes touched […]