726 students cross stage at NAC with sense of pride 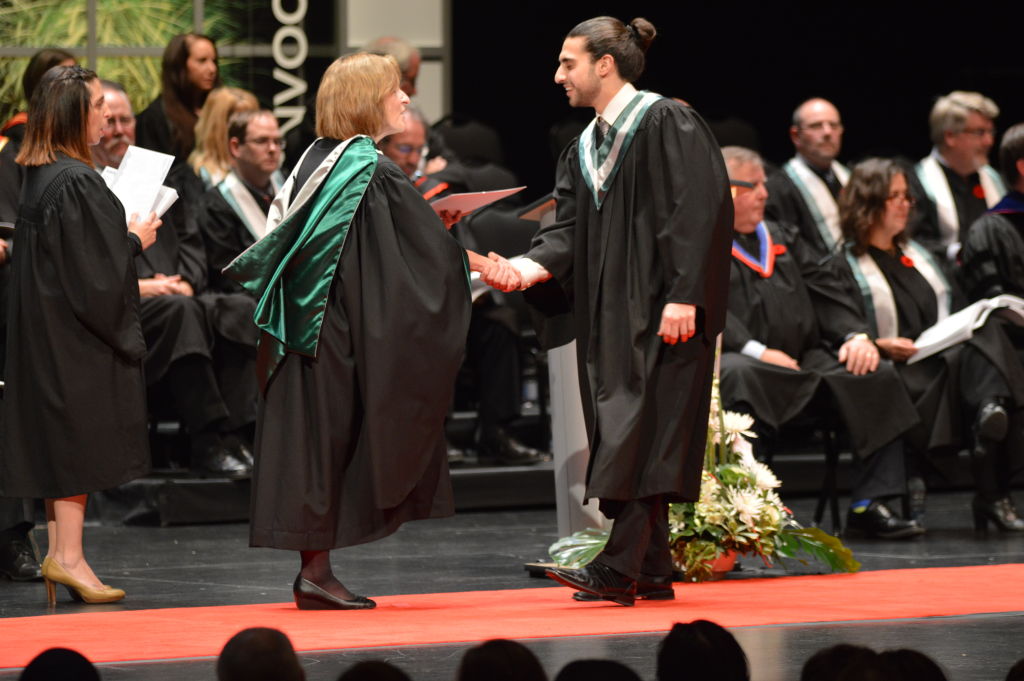 For many Algonquin students, graduation seems like a far off dream. But for the students who were dressed in cap and gown parading to the celebratory bagpipes, those dreams became reality at the National Arts Centre Nov. 10.

Although there were only 726 students in attendance,  which is a 13 percent increase from the fall convocation of 2014, about 2,200 students graduated. And of the many accomplishing students, Kevin Musson stole the show during the convocation.

Musson, now a graduate of the building construction program, was the recipient of the Algonquin Centre for Construction Excellence award.

“I had no idea that I had won,” said Musson. He knew that he was among four other students in the running for the award, but found out that he had won while on stage.

The ACCE award is given to an outstanding student in a building science or construction trade program.  The recipient is required to have consistently shown strong leadership capabilities, contributed ideas and innovation within the program, all while maintaining academic success.

That is exactly what Musson did.

“I volunteered to help high school students with carpentry,” said Musson. “And I worked with (my) teachers on how to improve courses.”

Musson aspires to work in civil engineering. He attends the construction engineering course at the college on the weekend.

“I’m going to miss my classmates,” said Musson. “We really became a family.”

He isn’t the only one.

Maxime El-Asmar, a business management and entrepreneurship graduate, will miss his classmates the most of anything from his college experience.

“I feel accomplished and relieved,” said El-Asmar. “But I’m going to miss the comradeship (experienced) among students with the same goals.”

El-Asmar plans to travel and then wants to start his own business.

Unlike El-Asmar, Sarah Versluis did not get to experience the in-class setting to make friends and acquaintances.

“I’m a mom of three and I work a full time job,” said Versluis. “I wasn’t going to finish the program but  I did, and it feels good to accomplish something. It gives you a sense of pride.”

According to Karen Spence-Elder, business operations and events with the registrar’s office, 145 of the total graduates completed their courses online in the spring and were invited to the fall convocation.

Algonquin has held 11 convocation ceremonies in Ottawa this year and has an alumni of over 150,000 students.