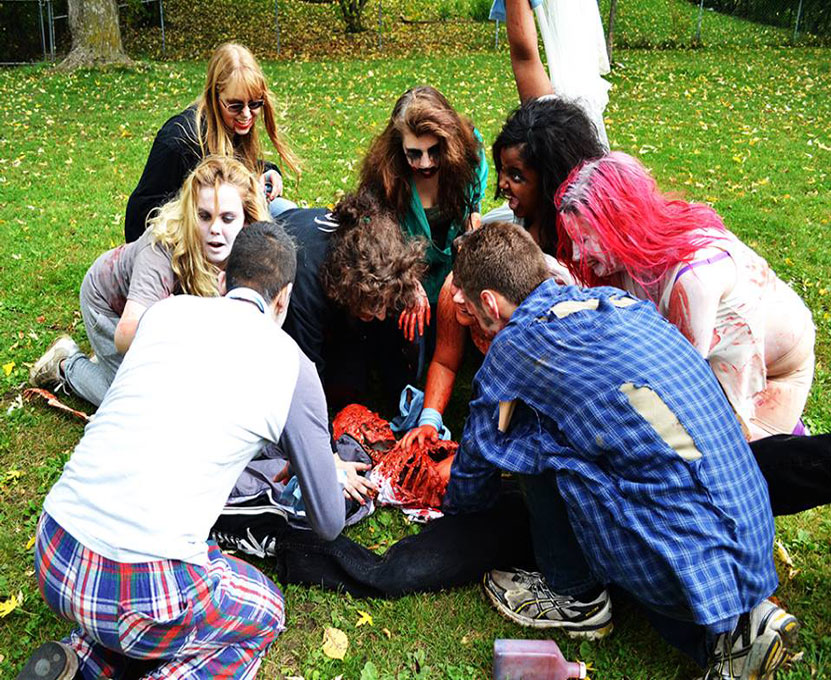 Eight students who dressed up and volunteered as zombies decide to act the part following the zombie run. Runners had to avoid the zombies during the event without getting their flags taken.

Running from zombies may be a nightmare to most, but for many Algonquin students it was an opportunity that couldn’t be passed up.

The Algonquin Students’ Association organized a five km “zombie run” beginning outside the Fitness Zone.  Runners then had to make their way across the north end of campus, to the soccer and baseball fields before returning to the starting point.

The runners began with two flags around their waist and attempted to run the whole course without having their flags taken by the zombies, who were split up between the soccer field and the baseball field. These were considered the infected zones.

“I love how close everybody got on the zombie team,” said general arts and science student Brigitte Riberdy.  “It was like a whole ‘go team’ kind of thing.”

The runners ran in heats of 15 to avoid any collisions.

“It was hard,” said travel and tourism student Anyssa Hamilton.  “Especially once we got into the soccer field; that was the toughest part.”

Some zombies were able to collect up to 20 flags including first-year business administration student Ahmad Rabi Sherzad.

“I knew the whole dress-up part would be fun but I didn’t expect things to get so competitive,” he said.  “It was basically like playing rugby minus the tackling and the ball.”