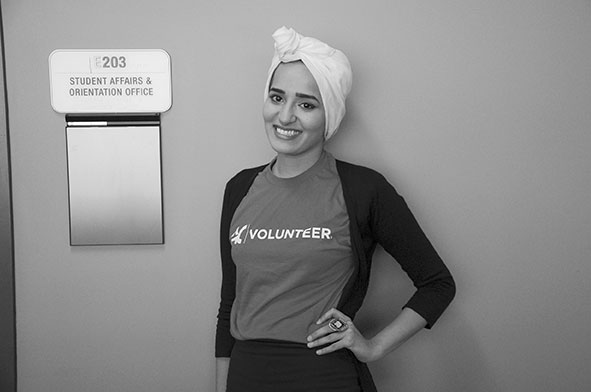 Busy lives can make it hard to dedicate yourself to a cause. But these students are known to live for committing their time and hard work for free.

Huda Syed, a second-year business administration student, recently had an interview to be a student director on the board for the Student’s Association. Her first orientation at Algonquin two years ago made her realize she wanted to be more involved with volunteering.

“At the orientation, the opportunity to volunteer was right in your face,” Syed said. “I didn’t know anyone at the time either so it was a great way to make friends.”

Since then, she has volunteered with several community projects, went on the alternative spring break trip to Dominican, was her class representative, a student leader and a student ambassador within the college.

Her experiences outside the college are extensive as well. She has been involved with the cancer society, Bluesfest and Islamic Awareness week, to name a few.

“I always recommend people go through the SAO. There’s volunteering every month and they plan out activities for you,” said Syed.

She said the perks of going through the school to volunteer are great too.

“You get money towards the bookstore and good quality T-shirts. I have a whole drawer dedicated to those shirts,” joked Syed.

She also recommends talking to the people behind the co-curricular record program because it has a list of activities you can do and going through the school is easy.

“Volunteering taught me how to get along with everyone, work in a group towards a goal while also making good friends,” said Syed. “It’s not like a job, it doesn’t take too much of my time. It makes me happy and my time won’t be wasted. It will go towards something useful in the community.”

Her favourite volunteering experience was the Dominican trip last year, when she was there for one week in the middle of winter to teach students.

“I got to experience the culture. The food was delicious and the children were so amazing, I miss them so much,” said Syed.

Syed said she has become more comfortable with herself since volunteering and she is more outgoing and social because of it.

“Volunteering is free experience and I love the fact there are more rewards than with money. With money I will spend it, but experiences are enriching,” she said. “Those who don’t volunteer are missing out. Character building and networking are the most important traits volunteering gives you.”

Trevor Anders, a second-year police foundations student, is on the Spread the Net committee volunteering until the end of February. He was involved in the walk-a-thon for Spread the Net on Feb. 26 which had teams go around the school for eight hours to raise money for malaria-preventing bed nets for families in Africa.

He works two part-time jobs, one as a bartender at the Observatory and the other as a server at a retirement home in the city. Yet, he still finds time to volunteer usually more than four hours a week because according to him, volunteering is a huge part of getting yourself noticed in the police community.

He has been involved with several SAO community projects such as the furniture donation drive, IKEA Madness event and the Debra Dynes house. He has represented Algonquin in the Ottawa community with various law enforcement agencies and their events such as MADD Dash, 9-1-Run event and the National Peace Officers Memorial Run.

He admits volunteering sometimes gets a bit overwhelming.

“Sometimes you can go a bit overboard. But it’s for a good cause so it is hard to say no because you also get so much out of it,” he said.

His love for volunteering began with Spread the Net, where his professor Lisa Roots was a significant influence to him.

“She had so much passion and drive for it and seeing that made me want to get involved,” Anders said. “After that, as soon as opportunities came up through my program I started signing up for everything.”

The biggest thing he has learned is there are numerous organizations in the city that run solely on volunteering.

“Volunteering is so important for these places and the average citizen doesn’t even realize it. It’s important to immerse yourself into this other world that exists that isn’t based on money, capitalism or competition,” he said.

After volunteering so much, he started looking at the world a bit differently.

“I became less selfish. I am more compassionate to people and less ignorant of people in need. Everybody has a story,” Anders said. “It’s the simple things that really matter and are valued so highly by others in need. I plan to volunteer when possible for the rest of my life.”