You are here: Home / Featured Stories / Gallery / Life / Off Campus / The Purrfect Career 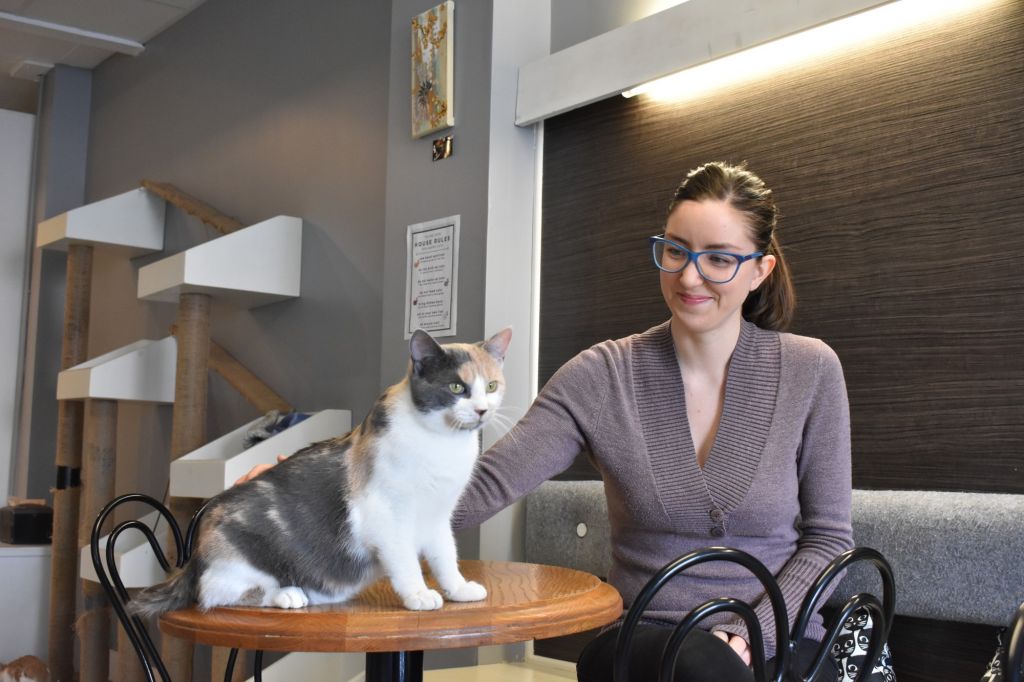 The owner of Feline Café in Hintonburg, Josée Cyr and one of the café's rescue cats, Stella.

The Feline Café in Hintonburg has just opened for the day. Owner Josée Cyr, sits down for a coffee and a chat. To her left is a window where all the rescue cats are playing with the volunteers of the morning. The sound of a Nora Jones soundtrack fills the café with a tranquil melody.

Though the coffee shop has only been open for a short while this morning, already a steady flow of regulars has come in to enjoy this unique experience.

Though she is now the owner of the Feline Café in Hintonburg, it wasn’t always what Cyr, 26, had in mind for herself. But thanks to her stubbornness and perseverance to never settle for something she was not passionate about, she has created her dream job.

When it came time to pick a postsecondary school program, her parents thought her future lied in fashion due to her love for crafts and design. There was talk of her moving from Sudbury, Ont. to a bigger city such as Toronto or Ottawa in order to pursue an education in fashion.

She ended up closer to her home, studying business at Laurentian University in Sudbury.

“Studying business is really nice because you get all the background story, all the guts of how a business works, and how all the subjects like marketing and accounting all come together. That was just really fascinating to me,” said Cyr.

However, questions were raised about what she was going to do after graduation. Cyr never had a clear idea of what she wanted to be in the future, even as a child.

Like many of students at Algonquin, Cyr struggled to figure out what her next steps were going to be after school.

“I feel like I struggled because I knew I didn’t want a typical job. When you’re growing up your options are to work in a bank or you work as a nurse or you do all these cookie cutter things that we have in our heads when we’re kids, and I didn’t like any of them.”

She believed that the perfect job for her didn’t exist. So, she turned to travelling in Thailand, a few years after she graduated, to gain some perspective on her future.

With experience in retail, restaurants and corporate companies, she knew she would never be happy working in a position she was not passionate about. Then she turned her focus to the things she enjoyed in life.

Cyr explains that ever since she was a little girl, she adored animals. Cyr’s mother, Lynne, recalled the time her daughter first started to use the internet. Cyr was in Grade 7 and had been watching animal cruelty videos, resulting in her decision to start cutting animal products out of her life.

As Cyr grew older, she found a passion for trying new types of vegan dishes with her sister, Stephanie, when they moved to Ottawa together, right after university.

Cyr also had a passion for crafts in her youth. She had sewn cushions with cat and dog patterns on them to be sold to raise money for the local SPCA.

She also designed clothing for her dolls and even designed her dress for the prom, according to her father, Denis. A natural businesswoman, she often took pleasure in trying to sell the items she made by hand.

After reflecting on her passions in life, she thought about combining her love for animals, food, coffee, and business to create her perfect career.

She had been to other cat cafés and loosely considered starting her own, but it was through the lessons she learned while travelling that she decided to get serious about starting this new business endeavour.

Cyr loved living in Ottawa so that was where she wanted to set up her business. Enter Ottawa’s first vegan cat café.

Starting up the café was easier said than done. Since it was such a new concept, it wasn’t fully understood and accepted by people.

Even her parents were apprehensive about the idea.

“As a parent you always hope for the best,” said Denis. He admits that he anticipated the failure of his daughter’s business before it would even open. But, she persisted enough to figure it out on her own.

One of the hardest and most frustrating parts was getting permits from the city.

She reached out to the owners of other cat cafés for help on solving the problems that arose. Specifically, the owner of Kingston’s South Paw Cat Café, Scott, acted as a mentor to Cyr in dealing with the issues she was facing with her business.

It was her initiative and stubbornness to find the solutions to problems that made opening day possible.

With over a hundred adoptions to date, Cyr has entered new business endeavours which include yoga with cats sessions, workshops, and merchandise sold in store.

Cyr’s advice to anyone passionate about starting their own business or developing a new idea is realizing the importance of taking action and finding the solutions to problems that arise.

The Purrfect Career Reviewed by Jaden Lee-Lincoln on March 8, 2018 .

The Feline Café in Hintonburg has just opened for the day. Owner Josée Cyr, sits down for a coffee and a chat. To her left is a window where all the rescue cats are playing with the volunteers of the morning. The sound of a Nora Jones soundtrack fills the café with a tranquil melody. […]

The Feline Café in Hintonburg has just opened for the day. Owner Josée Cyr, sits down for a coffee and a chat. To her left is a window where all the rescue cats are playing with the volunteers of the morning. The sound of a Nora Jones soundtrack fills the café with a tranquil melody. […]