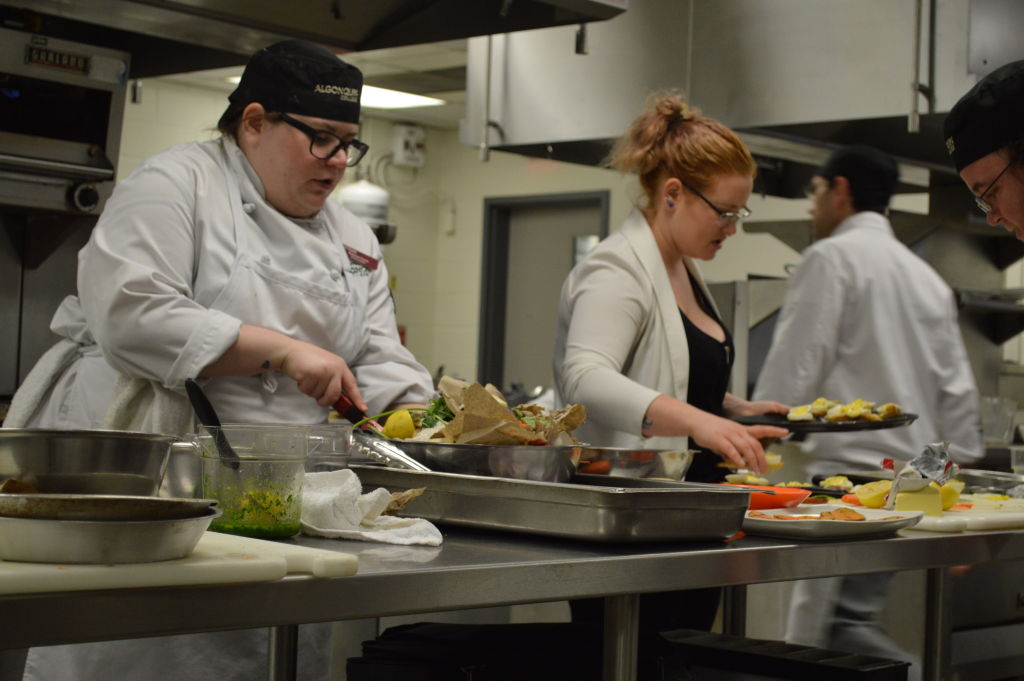 Fierce competition and high pressure engulfed the H-building on Nov. 14 when 12 teams of students went head-to-head in Algonquin’s fifth annual Battle of the Knives cook-off.

Overall, team number two, made up of culinary students Michael Chartrand and Roxanne Caron and event management student Desiree Labon, won the votes of both the judges and the public.

Chartrand said that it was hard work, but that winning the competition was extremely rewarding.

“The hardest part for me was not knowing who I’d be working with,” said Caron, second-year culinary management student. “My team ended up working together really well and I’m so shocked we won.”

Jim Kyte, dean of the School of Hospitality and Tourism, presented the awards to the winning teams. The scores were tight for the winning teams, but Kyte said that it’s ultimately what the students took away from the competition that mattered.

“I can bet you’re a better chef than you were this morning,” said Kyte.

“This year students from the event management program were included,” said David Keindel, a professor in the college’s School of Hospitality and Tourism.

“Teams were drawn out of a hat just before the start of the competition and they were made up of two culinary students and one event management student,” he said.

The event management student was in charge of selling tickets to the public for the final display and tasting of the food. The culinary students were tasked with combining their individual menus and deciding on six dishes that could be made based on the ingredients provided and the time allotted.

Despite the competitive side of the event, Keindel emphasized the value the cook-off had on the student’s professional and collaborative skills.

“This kind of competition really mimics a real-life situation for the students if they go on to work in busy restaurants,” said Keindel. “Here they were faced with high pressure and were forced to work at a fast pace – they didn’t have time to waste on disagreements or let personalities get in the way.”

“Teamwork and working together was one of the biggest takeaways for the students.”