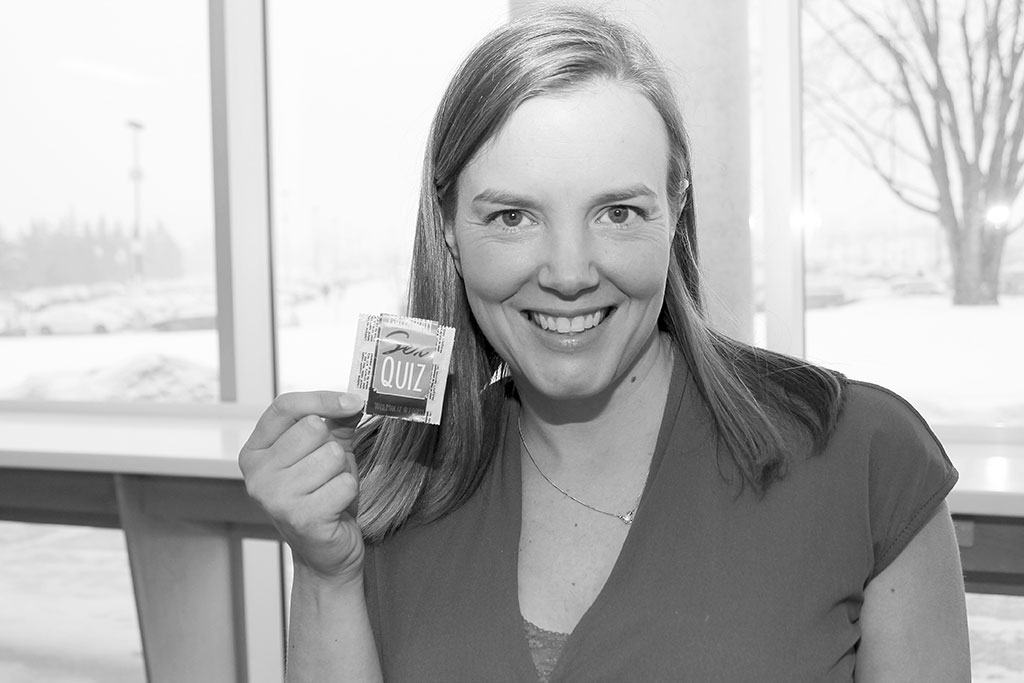 Condoms flew through the air to the tune of students’ giggles as the sensation of elation filled the corner lounge of the Student Commons on March 12.

The Great Canadian Sex Quiz, hosted by sexologist and University of Guelph professor Dr. Robin Milhausen, has been travelling around post-secondary institutions in Canada to test students on their sexual knowledge.

“I can answer all your burning sex questions – or symptoms,” she quipped. “You’ll have something to talk about at your next family dinner.”

Milhausen’s conversational tone ringing through the speakers attracted passersby. A crowd which started with only 12 people quickly rose to about 40 by the end of the hour-long session.

A slide of a cupcake was projected on the screen as a prompt for Milhausen to inform the students that a woman’s fluids taste best at the 14th day after her period, which also happens to be when she is most fertile.

“There’s your incentive to have oral sex,” she said with a smile as students stood timidly in the doorway, watching.

“Come on in,” she called them. “We’re just talking about vaginas and when they’re tasty.”

Milhausen also clarified the difference between a few forms of sexual relationships: A one-night stand (“If you can’t remember their name, it’s a good thing.”), a booty-call (“The classic 2 a.m. text.”) and friends-with-benefits (“You have sex and play Mario Kart, sometimes at the same time.”)

One of the most shocking parts of Milhausen’s presentation began with a picture of a long steel rod. The sexologist had people guess what the object was before she informed them that it was a vaginal barbell.

A vaginal barbell is used to strength the pubococcygeus muscles.

“This is just if you want to make your muscles real strong. That way you can grip the penis inside you or shoot a football out of there or something,” she said.

Milhausen informed the crowd that most women perform kegel exercises for this purpose.

“They’re super easy to do. You can do it during red lights or commercials or even boring classes.”

To end the day, Milhausen brought five people to the front to play a Big Brother-style game in which the students were asked a question such as “How many minutes of foreplay do couples desire?” and asked to write down their answer.

“Eighteen minutes is the correct answer,” Milhausen told the crowd. “So set your iPhone for 18 minutes of fun.”

One student was eliminated in every round, walking away with a vibrating penis-ring as a consolation prize.

“You can use it on your body, your partner’s body, a sore neck,” Milhausen said.

“I’m glad that the SAO is making an emphasis on this. You really create a community in the room. People walk away with so much knowledge, enhanced pleasure and health,” she said.

“Their sex lives have been changed forever.”