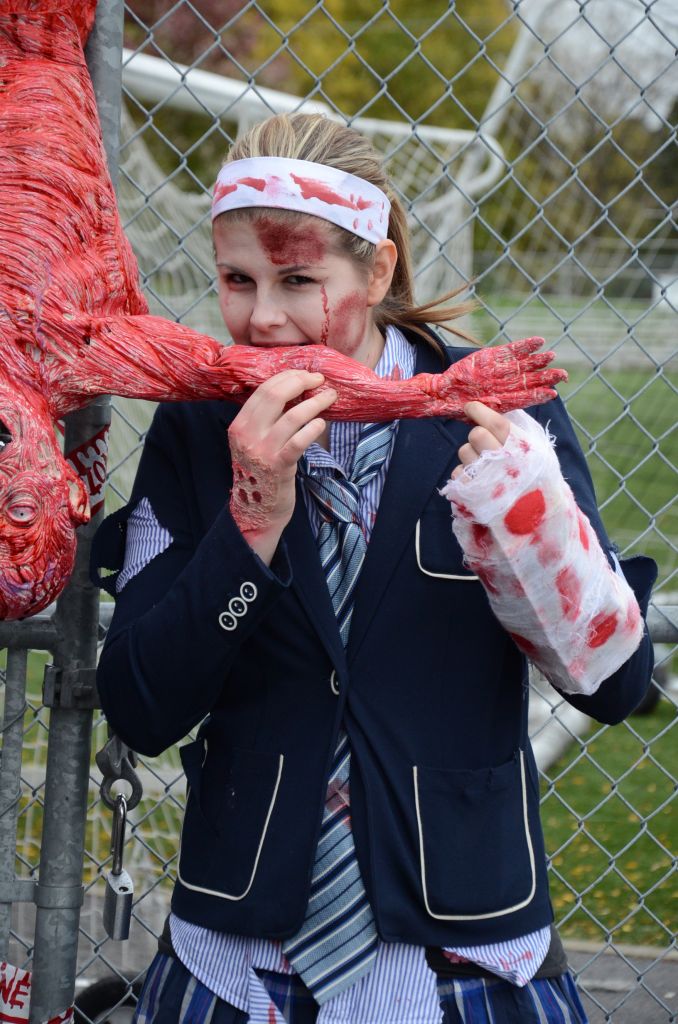 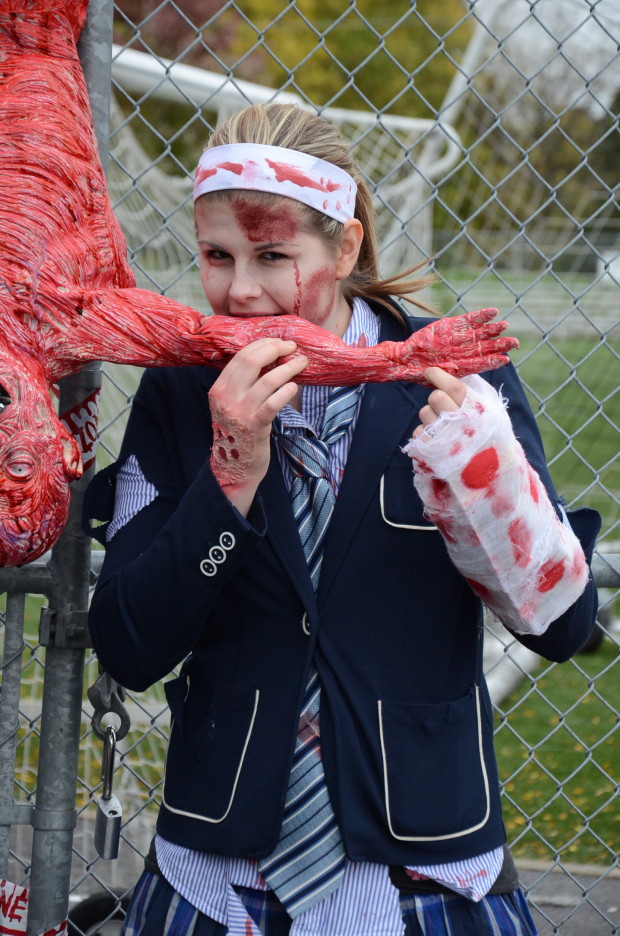 Algonquin Students’ Association and the Fitness Zone employees worked together to make the five kilometer zombie run a bigger success than its previous year. But Mother Nature had other plans.

The fun run kicked off in the late morning of Oct. 9 with dark rain clouds and cool winds adding to the ominous atmosphere of a zombie apocalypse that the Halloween props had already begun to create. But even zombies could be deterred from fresh brains when threatened with rain.

This five kilometer zombie run promised double the registered runners and volunteer zombies of the previous year, except over half of the participants on both sides failed to make an appearance. The seriously damaged numbers didn’t stop the fun however, as a small group of runners and zombies were more than happy to play rain or shine.

“The weather makes me a little nervous,” said first-year upgrading program student Kaylea Ariss, a zombie stalking the first infected zone. “A little rain is ok but I don’t want to get soaked. I’m still going through with this though.”

Corn starch, red food colouring and syrup made up most of the blood that covered the undead, and ripped clothing completed the zombie look.

“We went with some less coordinated zombies,” said Fitness and Wellness coordinator Wayne Boucher who was in charge of the event. “We wanted to make it less like World War Z and more like Walking Dead where the zombies stumble around and lunge when you get close.”

Sent in heats of 15 to avoid collisions and too much chaos, the first group of runners began with stretches at the starting line to prepare themselves for the mini hordes of zombies in the two designated infected zones.

“When we came to the infected zones there’d be someone that goes ahead and I’d pair with them whether they knew it or not,” said first-year medical radiation technology student Alesha Sim. “I’d run just behind them because you don’t want to be first in or last out so I let whoever ran ahead attract all the zombies and hoped for the best.”

For the runners that weren’t paying attention in the pre-run briefing there was some closure as the two infected zones gave off plenty of warnings with limbs, cobwebs and other large obstacles decorating the area.

Unlike the standard zombie apocalypse that is featured in Hollywood movies and the more famous television show Walking Dead, the survivors had two lives – towels tucked in at their waist. The objective was to run the course, through the zombies, and reach the finish line with at least one life still attached. Runners could continue the run if they lost their lives but bragging rights were only given to those who finished with a towel.

“I’ll be doing it again as a runner for sure,” said first-year business administration student Laura Kelly. “It’s a lot of fun and it’s a 5k so you run some and walk some. Just be sure to catch your breath between zombie hordes or you could be in trouble.”