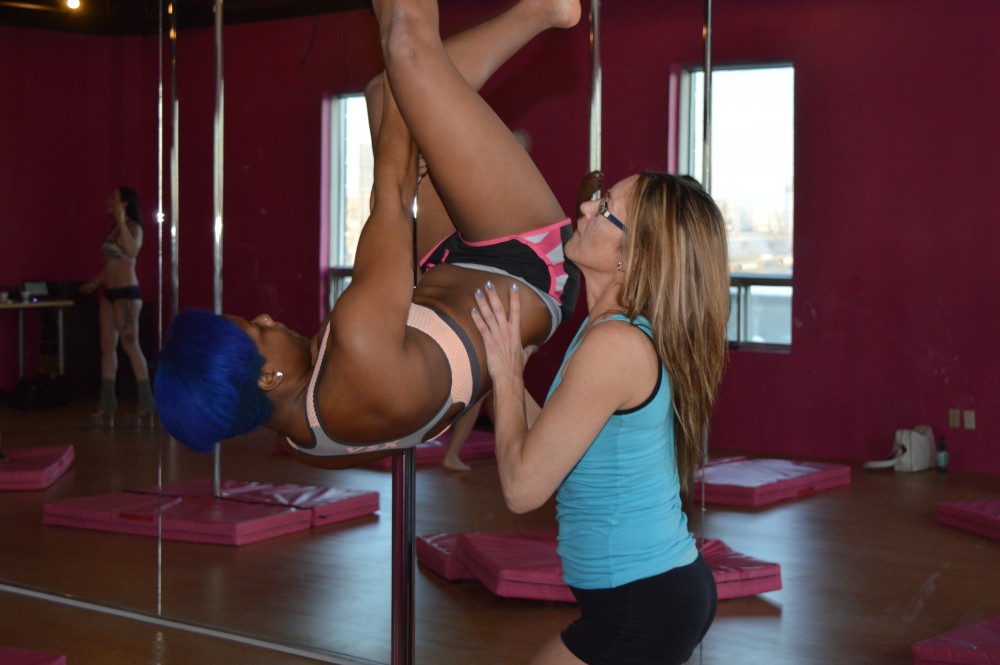 Despite the dozen spandex-clad figures revolving around shiny metal poles and the array of hats and feathers on the wall, one thing is clear – this is no strip club.

It is a bright, second-story pole studio on 910 Clyde Ave. with floor-to-ceiling mirrors and a stash of pink exercise matts in the corner. Algonquin students are spinning and twisting into different positions on the poles.

Lyne Fortin, an instructor at the studio, moves around the room correcting postures and offering encouragement.

They are members of Algonquin’s new pole fitness club. The club started meeting on Jan. 13. This is their third week coming to 3Sixty Dance and Fitness.

“When (people) think pole fitness they think strip clubs,” says Karolyne LaFortune, who is in her second year of health and fitness promotion. She started the club with Marie Roberts, a second-year massage therapy student.

Both she and Roberts want to promote pole fitness as a sport, not a sexual activity.

“There are actually two sides to it,” Roberts says. “And the sports side shouldn’t even be compared to the other side.”

When Roberts and LaFortune first approached Patrick Newell, the college’s clubs and communities co-ordinator, he was a little skeptical.

“I remember when they first came to me. I said, ‘Pole dancing?’ They were keen on stopping me and saying, ‘No, no. It’s pole fitness,’” Newell says.

“When you think about it, it’s pretty much gymnastics,” Roberts says. “It’s very acrobatic.”

Seeing the sweating faces, taut with concentration as they hold their bodies horizontally on the pole, it’s clear the moves are indeed an intense workout.

Gripping the pole is not just hard work, it takes a physical toll. “My hands are hurting now,”

Several of the girls say they found it difficult to walk the next day.

According to Newell, fitness clubs aren’t that popular. There are over 100 clubs at all three Ontario campuses, but few are fitness-related. Thus, the club started with only 50 tickets to see if it would gain traction.

They only sold 10 tickets the first week. However, after Roberts and LaFortune put on a public demonstration on Jan. 19, Newell sold 35 tickets in two days.

“At first I was a little iffy about booking the Student Commons,” Newell says. “Because I had never seen it before.”

LaFortune laughs as she describes the students’ reaction to the promotion. “Well, we got recorded a lot,” she says.

“We got a few guys going around being like, ‘Oh you pole dance? Show us something sexy,’” Roberts says.

But for the most part, LaFortune and Roberts believe that their message came across. Their moves were not what the onlookers expected.

They demonstrate agility and strength more than sexuality. They hope this will change people’s idea of what pole fitness is.