You are here: Home / Life / Matches made in heaven: Bavarian beer and burrata 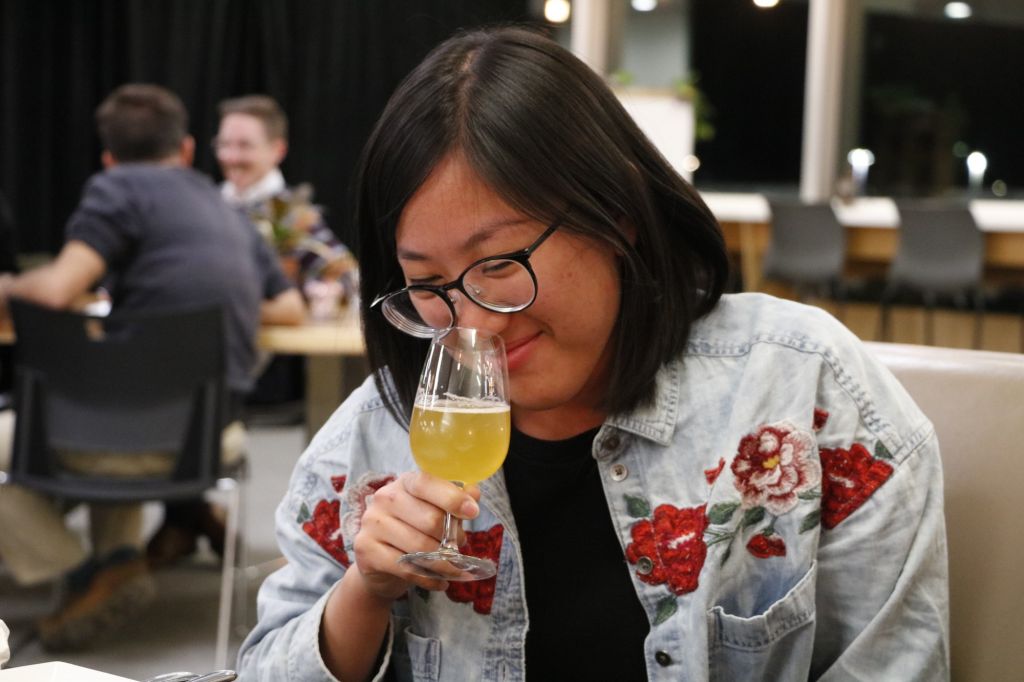 “The colours of Italy on your plate and the beer of Germany in your glass.”

Skeggs was referring to one of the evening’s offerings: a “yeasty wheat beer” from Germany’s Bavaria region, matched with a dish of soft burrata cheese and skewered cherry tomatoes dipped in olive oil and flaked in basil leaves. While he spoke wait staff shuffled among tables decorated with miniature gourds on artisanal chopping boards.

The evening of beer history and eclectic flavours was hosted by the AC Hub for the eighth year in a row. Event organizer Mélissa Marchand described it as a great opportunity for students to “learn about local beer, celebrate community and enjoy a great night out with other students.”

The carefully selected pairing of light dishes and flavourful brews was curated by Skeggs himself, who provided knowledgeable and entertaining commentary on the history and cultural aspects of each beer as they were served.

“It’s sitting on an active yeast base,” he went on, explaining the heady Bavarian brew’s particular qualities. Some students declared tasting bananas and cloves in their glasses, but Skeggs noted that neither was used in the production of the beer, as Bavarian brewers traditionally never use more than four ingredients.

“The two oldest cultivated plants in the world are wheat and barley… A long time ago we decided wheat was better for bread and barley was better for beer. It was just a few people like the Germans and the Belgians who disagreed.”

The peculiar flavours occur “because [the beer] hasn’t been aggressively filtered,” Skeggs said, contrasting the craft method with the practices behind most commercially produced beer. Craft brewing has been on the rise in the last decade, he explained.

“You drive an hour and you can hit 30 breweries. It’s really incredible how far we’ve gone in the past 10 years.”

A New England style IPA (India pale ale) presented another puzzling flavor combination. “Tastes opposite of the smell,” said second-year animation student Christie Kosman after sampling a sip, and Skeggs agreed: “The taste goes from… sweet, tropical fruity, to being quite bitter.”

Kosman – who described herself as “a really cheap drinker” – said it was her first time at a tasting event. Typically a fan of apple ciders over other alcohol, she mentioned that drinking culture is vastly different in Indonesia, where she is from.

There the drink of choice for most people on a night out would be Bir Pletok, a non-alcoholic “sweet-tasting kind-of-beer,” paired with western fast food fare. “We have our own kinds of snacks,” she said, “but millennials prefer the western things, McDonalds, Burger King, KFC.”

As Kosman excused herself to get some air – voicing her embarrassment over throwing in the towel after only four glasses – Skeggs walked to the centre of the room to introduce yet another pairing and speak briefly on the unavoidable comparison between the practices of beer and wine tasting.

“If we take the hoppiness or crispness of a beer, we can compare that to the acidity of wine,” he said to the multitude of faces who had gotten progressively redder as the night went on, some perfectly matching his handsome rosé-coloured dress shirt. “I am not thinking I’ve got a glass of beer in front of me… but a collection of aromas.”

“Beer tasting is… just the same as wine,” confirmed second-year baking and pastry arts student Allyson Padgett, speaking against the backdrop of spirited chatter that filled the room. She was enthusiastic in her agreement that the two disciplines are very comparable, although she admitted she is not “a wine person” herself, but rather a lover of “strong beers, lagers especially.”

Speaking of the particular lager she was sampling, Skeggs described its qualities alongside Czech cuisine. The beer’s straightforward taste complements Central European staples like perogies and similar hearty pastries. Tonight the pairing was fried zucchini sticks with a creamy garlic dip.

Padgett said that in her home country of Honduras the food of choice would be quite different. When drinking alcohol there she would instead enjoy what she described as “basically a sea-food type dish” consisting of calamari, shrimp, conch and catch of the day, all cooked in a coconut broth.

Like Kosman, Padgett was attending the event for the first time and was carefully pacing herself, citing an unusual concern.

“If I drink a lot, I start speaking Spanish very fast.”

Matches made in heaven: Bavarian beer and burrata Reviewed by Asen Aleksandrov on October 24, 2018 .

“The colours of Italy on your plate and the beer of Germany in your glass.” So quipped sommelier coordinator Geoffrey Skeggs, addressing the room of Algonquin students and guests attending the Oct. 16 Beer & Food Pairing Workshop. Skeggs was referring to one of the evening’s offerings: a “yeasty wheat beer” from Germany’s Bavaria region, […]

“The colours of Italy on your plate and the beer of Germany in your glass.” So quipped sommelier coordinator Geoffrey Skeggs, addressing the room of Algonquin students and guests attending the Oct. 16 Beer & Food Pairing Workshop. Skeggs was referring to one of the evening’s offerings: a “yeasty wheat beer” from Germany’s Bavaria region, […]