Lifting the veil from Muslim culture 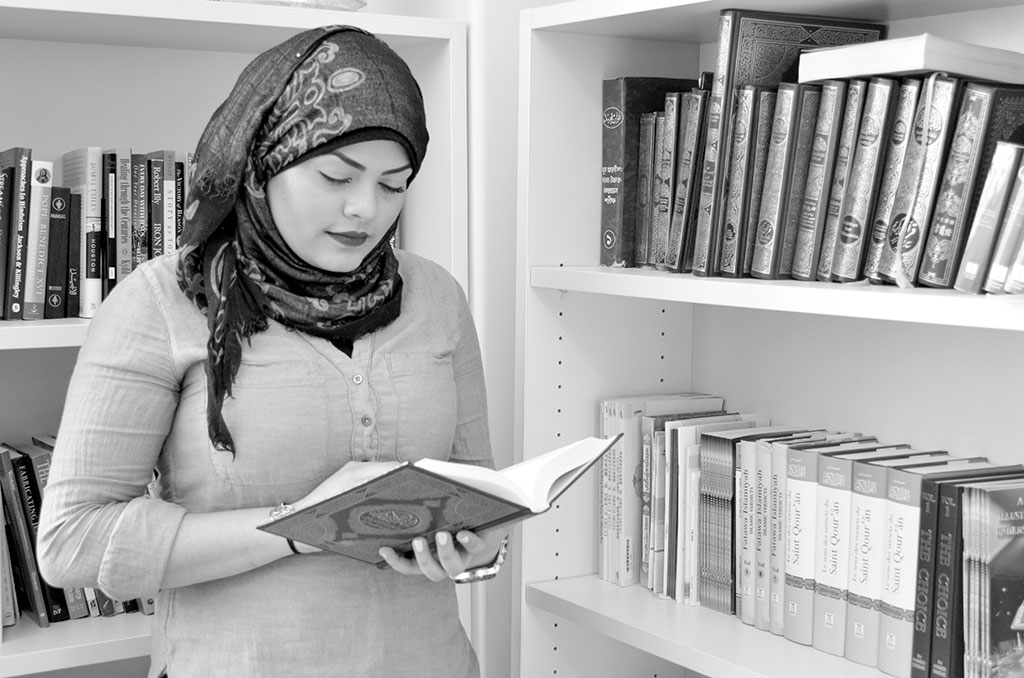 Mirehan Oleimy is an 18-year-old, first-year television broadcasting student who fasts at Ramadan, wears a hijab, tries to pray five times each day and doesn’t drink alcohol or eat pork. She knows who she is and is proud to be Muslim.

She came to Canada from Cairo in Egypt with her Islamic family almost five years ago, and has stayed here to finish her education. She stands out as one of the few female Muslim students at Algonquin.

Committing herself to her religion takes dedication which she is happy to give. However, sometimes being a Muslim student even in a Canadian college can require some sacrifice.

Muslims are supposed to pray five times throughout the day. The closest place to pray is in the spirituality center which is located on the second floor of Student Commons.

Not to mention, breaks during class don’t usually last for more than 10 minutes, which makes time to travel there, prepare to pray and take minutes to speak to God impossible.

Before prayer, Oleimy explains, Muslims must Wudu, which is the Islamic procedure for washing parts of the body using water, making the body pure and clean in preparation to speak to God.

This can be difficult when in the middle of classes, so instead, Oleimy tries to pray all the prayers when she gets home, where it is more accessible and private to Wudu.

Another part of being Muslim means to fast during the month of Ramadhan from dawn to sunset. Ramadhan takes place in the ninth month of the Islamic calendar, which usually occurs during the school year. If a fasting is missed, it is required for the individual to make up that fast for the full amount of days missed. This is obligatory for adult Muslims with exception to those who are ill, pregnant, breastfeeding, diabetic or going through menstrual bleeding.

Being Muslim also requires Oleimy to have some dietary restrictions.

“We can pretty much eat what we want, except for anything that comes from a pig. We don’t drink alcohol either because basically anything that does damage to your body, we refrain from,” she said.

Furthermore, there is an expectation that Muslims should eat only halal meat, which is meat that has been prepared in such a way that eliminates as much of the pain as possible for the animal before it is killed for food.

“Living in a country like Canada, it is very hard to find halal restaurants. I personally do eat meat even if it is not halal (because) I can still say the prayer beforehand,” explained Oleimy. “I’m a student in college and there’s not really the opportunity to order halal meat, so that’s an issue.”

Wearing the hijab is mandatory for a Muslim woman, but some women make a personal choice on whether they wear it or not. Oleimy chooses to wear hers and loves being recognized as a “hijabi-wearing-girl.”

“People come up to me and compliment my scarf,” she said. “They tell me how unique and pretty it is so that is always really nice to hear. It feels great when people respect your religion.”

She clarifies the reason to wear a hijab is to help men not to see women as sex objects and instead, for them to like them for who they are. The hijab is a symbol of modesty, privacy and morality.

“We don’t wear anything tight, see-through or short-sleeved. It’s all about self-respect and protecting women from men’s eyes,” she said.

The requirements or limitations that being Muslim can have doesn’t seem to bother Oleimy in the slightest.

“I was born Muslim. It is important to me because I feel like it defines who I am,” she said.

Although she admits sometimes she can feel left out and that teenagers especially don’t take the time to understand why she does what she does for her religion. She says that sometimes people even refrain from approaching her because they don’t know how to act around her, even if it’s because they want to be respectful of her space.

“They don’t understand that we are just normal people. We can talk, interact and do things… Sometimes you can feel left out,” said Oleimy.

Other than the Muslim Students of Algonquin Club and the Spiritual Center where she went one time to pray with a friend, Oleimy says she hasn’t seen much support for Muslims at the college.

“I don’t think the school does enough,” she admitted. “There seem to be a lot of events going on for other groups of people so I would love to see the college put some effort into students like us, and make us feel equal.”

She says Carleton University has really provided a second home to her because of all the events and activities they provide for Muslim students. She said she attends most of these events even though she doesn’t go to the school.

Something in particular that caught her interest was Carleton’s “Try a Hijab for a Day,” where a stand was set up for women to try on a hijab and learn more about why Muslim women wear it.

“I wish there was something like that at Algonquin,” said Oleimy. “Or maybe if we could do something during the month of Ramadan because it happens during the school year. Anything that gets us together and makes us feel at home, and that people actually care about us would be really comforting.”

As a Muslim woman, Oleimy feels a heavy responsibility to set a good example.

“I feel like I have a message and responsibility to set an image for people who know nothing about Islam. It could totally change their perspective on Muslims. Just a simple act of kindness could change that.”