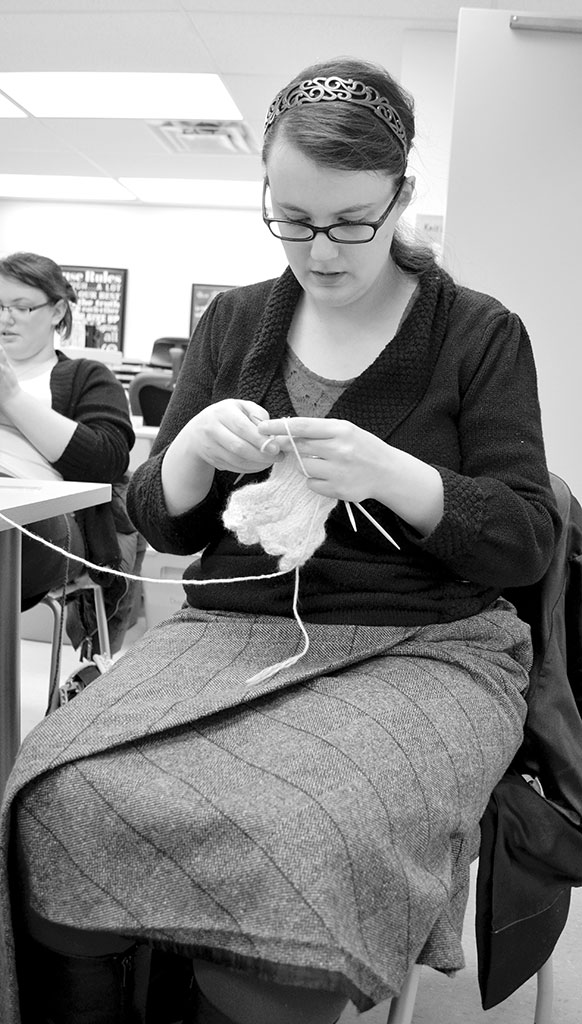 Alayna Belfry knits a pair of boot toppers. It is her fourth project under the guidance of Sandra McCormick.

It’s half past five in the evening on a dreary, early March day. Health services room C142 is filled with the sound of clicking and clinking knitting needles. The room, already painted in a fluorescent lime-green, is even more colourful when registered nurse Elizabeth “Billie” Pryer brings out a basket of brightly-coloured wool.

First-year museum studies student Sam Vannoy is knitting furiously away in a corner on one of two projects she has strung together so that if she gets tired of working on one, she can switch to the other.

She is among the 15-20 students who gather each Wednesday for the health services after-school program “Knit ‘n Knatter.”
“I’ve been an avid knitter for some time now,” says Vannoy. “I came by here one day to see what was going on, and immediately loved it. It’s a great way to meet other knitters and swap ideas with each other.”

The idea was picked up by health services manager Sandra McCormick and registered nurse Pryer when they visited the Wabano Centre for Aboriginal Health last spring as part of a larger healthy living initiative.

“We were inspired by the way they used crafts to promote mental health and physical well-being,” says McCormick. “We started doing research on the benefits of knitting and wanted to organize something similar to bring people together.”

While this is the circle’s first year at the college, the knitting circle has its roots in “Stitch ‘n Bitch,” a term used to refer to knitting groups since the second World War that eventually became an international organization.

Due to concerns from public relations over the original name, McCormick decided on the more appealing “Knit ‘n Knatter”.
Elizabeth Neilson, a first-year mobile application design and development student, joined the group in late September. Neilson, who has been knitting since she was five or six, says she joined the group because it provided her with a set time and place to knit. Neilson finds knitting to be relaxing, and says it shares many similarities to her program.
“It provides a break from coding. But at the same time, it’s a lot like coding. Both possess commands and variables with specific outcomes,” said Neilson. “It’s exciting to see the final product.”

First-year computer engineering technology computer science student, Alayna Belfry has been involved with the circle since January. Although she joined late in the year and had no previous knitting experience, with the techniques learned from McCormick, Belfry is now working on her fourth project: a finely-crafted pair of boot toppers.

Belfry agrees with Vannoy and Neilson that knitting helps her relax and multi-task, even knitting in class to help her concentrate.

Vannoy also knits during class because she has attention deficit disorder, and the repetitive movement helps her focus. Vannoy learned to knit when she was six after her grandmother taught her the basics, but really embraced it at the age of 18. Now, Vannoy is such an avid knitter, it is not uncommon to see her working on two projects at once, and is so engaged with knitting that she took classes on how to spin and dye her own yarn. She has even developed a business around her knitting talents.

“I learn from repeating things,” she said. “You can learn a lot about yourself; it took knitting to realize I could be patient.”
While Vannoy still gets frustrated from time to time with one of the numerous projects she has on the go, she doesn’t mind taking a break from knitting to clear her head, because it isn’t long before she’s at it again.
“When you learn to fix your own mistakes,” said Vannoy, “that’s what you really take off.”