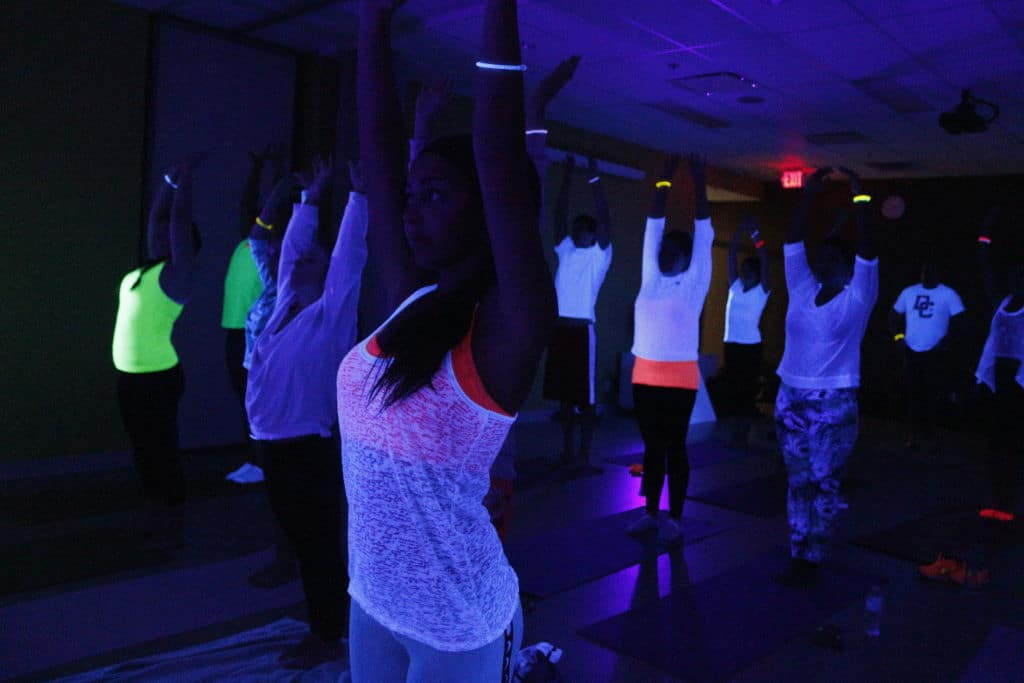 Bria Sherman, an event management student, and the rest of the attendees do tree pose at Black Light Yoga. The class was taught to techno music and consisted of mostly relaxed poses for beginners.

Room 206b in the Student Commons looked and sounded like a nightclub on Oct. 27 with loud techno music and the neon glow of bright clothes under black lights, but it was actually Algonquin’s yoga club.

The club hosted a free yoga class with its own DJ and four large black lights around the room.

She chose to use black lights in a dark room to relieve the judgement people might feel in a normal yoga class.

Nastiti also said that the event was designed with beginners in mind to get them interested in the practice.

“This was my first class ever,” said Glenn MacDonald, a friend of Nastiti’s who attended the event. “One of the reasons why I came to this yoga class is because I do personal training, but with personal training it’s really focused on specific muscles.”

MacDonald said he hopes to bring what he learned at the class to his clients so they can learn not only strength building, but also flexibility and increasing core strength.

MacDonald said the black lights lightened the mood during an intense workout.

“I’ve never done a yoga class with the black light and the techno music, which I thought was going to be a really interesting spin on the whole yoga practice, and it was fantastic,” said Nicolle Cardiff, who came to the event with friend Thoma Simpson, a business marketing student at Algonquin.

Cardiff, who has done her 200 hours of training to become a yoga instructor, said the class was good for a wide range of skill levels.

“[Ade] was really good at modifying each pose,” said Cardiff. “For beginners you started simple and you could advance it more.”

The yoga club will begin having weekly events this month and is planning to have another free event next semester.