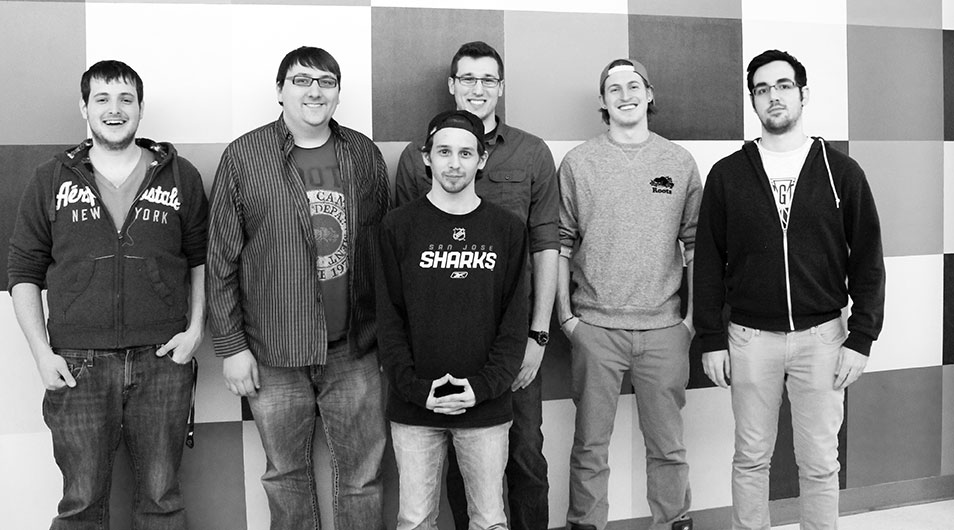 Completing the design, testing and successful operation of a project with a two-day deadline may sound like a student’s worst nightmare. But for 35 Algonquin game development students, it was a welcome challenge.

The event, held on Jan.24 to 26, called Global Game Jam (GGJ), encouraged people to come together and design, create, test and develop a video game in only two days, while also following the rules and prescribed theme.

Starting Friday  and ending Sunday at 5 p.m., there were 80 members including 35 students, competing in 15 teams for first prize.  The judges were from the game development company Dirty Rectangles, which includes Algonquin alumni and some current professors, like Derek Ledoux and Eric McQuiggan.

The GGJ occurs simultaneously in over 450 locations, in 73 countries.

First prize for alumni and industry professionals was mostly bragging rights, although student teams were competing for a chance to win an internship with Magmic, a mobile game development company based out of Ottawa. The best student teams wins a round of interviews with Magmic, with one student out of the team scoring the internship.

Algoquin winners included Palanquin (which also won third for Best in Show) by Jean-François Vienneau and Erik Uggeldahl, a game where up to three players work together to navigate themselves across the map without falling off the edge or being swarmed by enemies. Tied for first with Palanquin, Windmill by Derek Grant, Nathan Elliot, Martin Palko, Jordan Palmer, Byron Mayne, and Wilhelm Steyn, a Carleton student) a Super Smash Bros. style four player local multiplayer fighting game.

The games tied for first in the Best Student Game category, making them all eligible for the interviews, but still only leaving one internship spot.

Grant, a student in the game development program who brought food for the team, and only slept for five and a half hours during the event, said that the experience of working in a team was the most valuable part of the event.

This year’s theme, taken from the GJJ site was “We don’t see things as they are, we see them as we are.”

This is the first year that Algonquin has hosted the event, in a large room on the third floor of the J building, in a room largely populated by computers, energy drinks, Tim Hortons leftovers, and sleeping bags. Professor Bradley Flood, the game development program coordinator, was the host of the Algonquin site.

Flood had a few reasons for organizing the event, saying that it was a great way to kick-start ideas and get creative, as well citing the social aspect of the event, as it facilitated a chance to network with other developers.

“The Ottawa gaming community is small, so it’s good to get together,” said Flood.

The only real challenge that Flood had with the event was creating awareness of it.

That, and taking a panorama shot of the whole room of excited gamers on his smartphone before the 5 p.m. showing of the games on Sunday.

“Nobody move,” he said, while sweeping the room.

The room was friendly during the presentations, as teams brought their game to the big screen for demonstrations, explanations, and light-hearted competition as the judges were able to try out each game.

Francois Dodier, a game development graduate from Algonquin, noted that some of the challenges of game design have to do with the constant changes that occur as you go that can change the vision of the game. Dodier now uses the 3D rendering experience he gained in the game development program in his work designing guns for the RCMP.

Other standouts of the event include a solo effort by third year game development student Jamal Aberle, who only worked on the game for 14 hours, but impressed and surprised the room with a stage that turns out to be a replica of a Samsung TV.

However, the big winners were not students. A team of developers2 stole the show with their game Keep talking and Nobody Explodes, which used the highly anticipated Occulus Rift, a virtual reality headset unlike any other, and the Razer Hydra motion controller.

The game was created by Brian Fetter, Ben Kane, and Allen Pestaluky, a graduate of the Algonquin-Carleton joint bachelor of information technology program.

The object of the game is to defuse a bomb. It required one player to wear the headset and interact with the bomb, while three other players, who cannot see the screen, give the other player instructions on how to defuse the bomb based on a game manual.

In true spirit of the event, the developers of Keep Talking and Nobody Explodes have plans to further develop the game due to the response it garnered at the event.