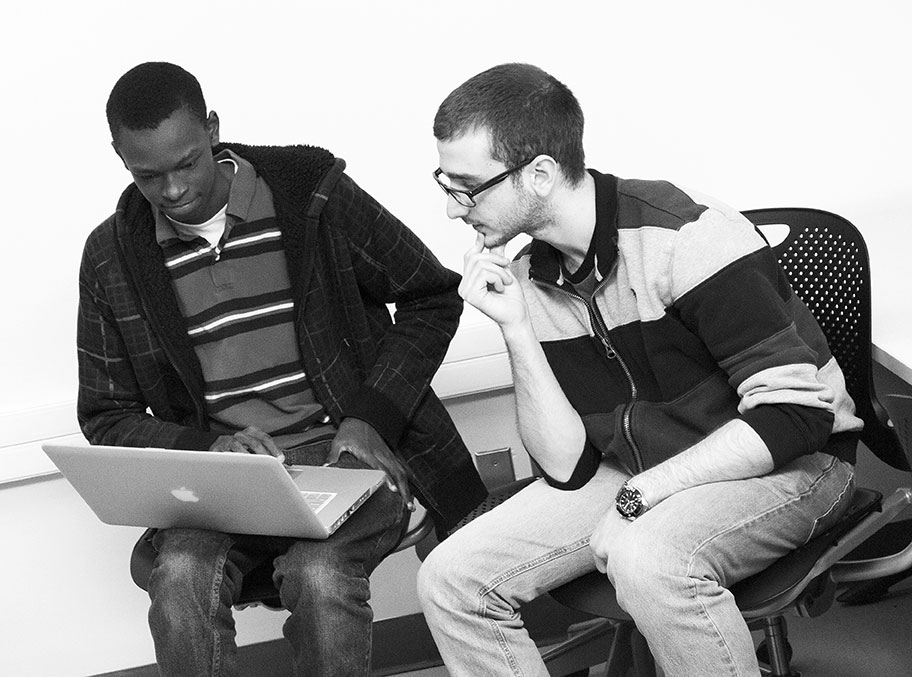 Lual Wal and Yazan Ajilani discussing their work on the Air Transat testing application. They are among the students using their skills to develop mobile apps for real-world companies.

The college’s first ever mobile application design and development program’s graduating class is developing a series of mobile apps designed to benefit real-world clients and corporations.

The class, taught by professors Steve Griffith, and Gerry Hurdle, has been split up into four teams, and are developing applications for a variety of clients. These clients include: The Canadian airline Air Transat, for whom the class is making an application for flight instructors to record test scores. A remote locating application for a company called Opus 2. A mobile application for Canvas, a program similar to Blackboard used by other courses at the college.

Ottawa’s Goulbourn Ward, for whom a segment of the class is creating an application dubbed the “Goulbourn Interactive Museum” is also a client. “It’s basically a digital tour,” says Justin Lane, a member of the Goulbourn dev team.

The application allows the end-user to navigate the township of Goulbourn while interacting with various destinations, such as the various landmarks and heritage building in this very historic town. When the user reaches his or her destination, or a location that gains their interest, the user can pull up the team’s application and read about it’s history

The Air Transat application on the other hand won’t be available for public consumption. It is really only for the airline’s own staff involved in pilot testing. It allows instructors to record marks and notes about a pilot in event-based testing environments and during other procedures. According to Scott Azulay, a member of the Air Transat dev team, it’s currently in the “initial build” phase, meaning it’s still very early in it’s development cycle, as it’s still in what is called the pre-alpha stage. But the team have begun coding and assembling everything needed for the program to work.

Earlier this semester in January, the four teams met with their respective clients, to narrow down the scope of their projects. At that point they begin to write “use cases,” detailing how various end users would use the final application. At the end of the month, the teams began mapping out their applications in a “wireframing mockup tool” called Balsamiq, developed by a former Adobe software engineer that allows the developers team to draw out the way.

For the rest of the semester, the students will work on developing an alpha build of their program, designing graphical elements, catching and fixing bugs, a beta build, and ultimately work toawrds an April release for their final build.