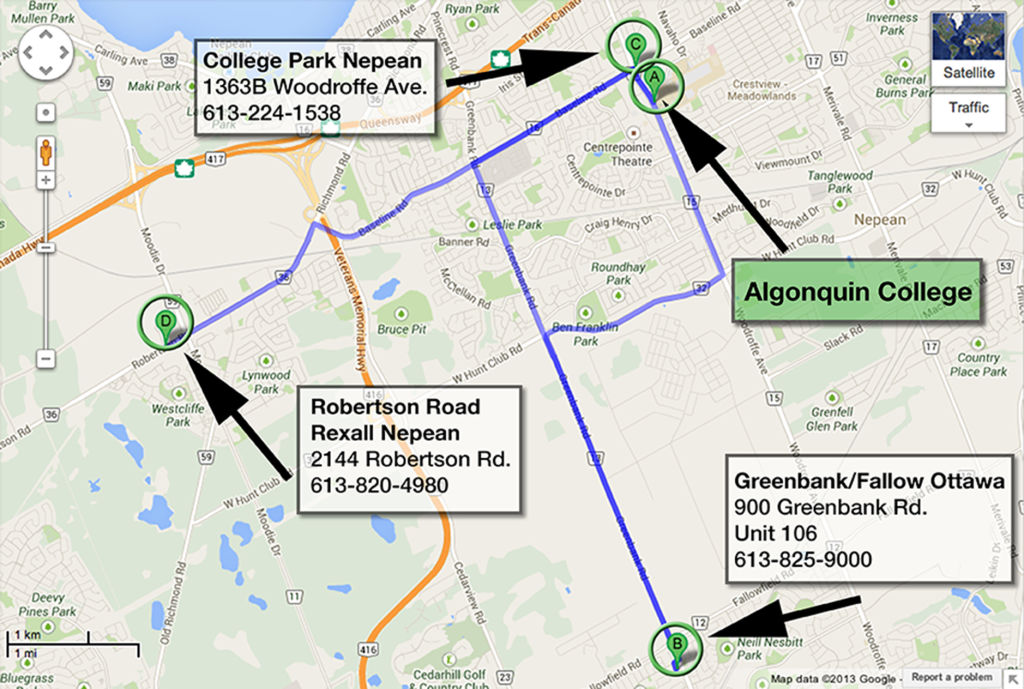 Trypanophobics — or those with a fear of needles — can literally breathe a sigh of relief this upcoming flu shot season thanks to an alternative needleless vaccine.

FluMist, a fine nasal spray containing the flu vaccine, has been in Canada since 2010 but is not offered at the college.

“Honestly, we don’t know much about it,” explained Jana Kolysher, fourth-year bachelor of science in nursing student and co-organizer of the Student Wellness Extravaganza at Algonquin. “We’ve heard about it but it wasn’t something for us to give.”

Although FluMist is not available at the college or through Ottawa Public Health clinics, some pharmacies close to Algonquin’s Woodroffe, Pembroke and Perth campuses do supply it.

The FluMist vaccine is administered by dividing the 0.2mL dosage between both nostrils. People between the ages of two and 59 may take the nasal spray, but it is not recommended for individuals who are immunosuppressed, pregnant or with an allergy to eggs.

However, the vaccine must only be administered at doctors’ offices.

“The pharmacists in Ontario are not authorized to spray the vaccine,” said Amira Abdalla, president of the Ottawa-Carleton Pharmacists Association. “But the regular influenza injection can still be done at pharmacies.”

Because the province does not publicly fund FluMist, patients must pay between $25 and $30 per dose. 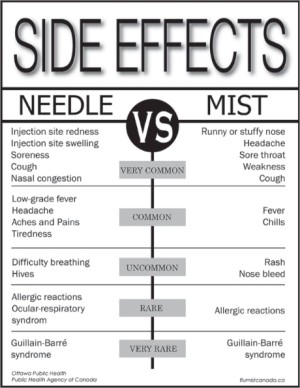 Some side effects of FluMist are runny and/or stuffy noses, as well as the possibility of nosebleeds. These potential effects, said Dr. Matthew Bromwich, are nothing to worry about.

“The nosebleed part is probably more due to the application and not so much the medication,” said Dr. Bromwich, an ear, nose and throat surgeon. “It’s rare because it would probably only happen in people who are pre-disposed to nosebleeds anyways. Some people have very superficial blood vessels in their nose and the lightest touch would cause them to bleed.”

But contrary to myth, the flu vaccine — inhaled or injected — does not cause the flu.

“The vaccine is not a live vaccine,” said Riccardo Lucchini, Ottawa Public Health nurse. “What happens at this time of the year, because there is an increased circulation of several viruses in the community, people may already be harbouring a virus in their body. It just happens to be a coincidence that they get vaccinated and then they come down with a cold or some other respiratory virus.”

But for those 10 per cent of North Americans with a crippling fear of needles, the lack of availability and accessibility may mean less people receiving protection from the flu.

“A lot of people don’t think that they need it because they think they’re healthy,” said Lyndsey Saunders, fourth-year bachelor of science in nursing student and co-organizer of the Student Wellness Extravaganza. “It’s not necessarily for you as a healthy person but it’s to protect the people that are vulnerable around you.”

This flu season, the Algonquin nursing students, in collaboration with Ottawa Public Health, have already provided 1,410 shots at the college.

Outside of the campus, the amount of places to obtain the standard flu shot has almost doubled.

“This year, it’s easier and more convenient than ever for Ottawa residents to get the flu shot,” said Donna Casey, Ottawa Public Health nurse. “There are close to 140 pharmacies and more than 300 doctors’ offices offering the vaccine.”