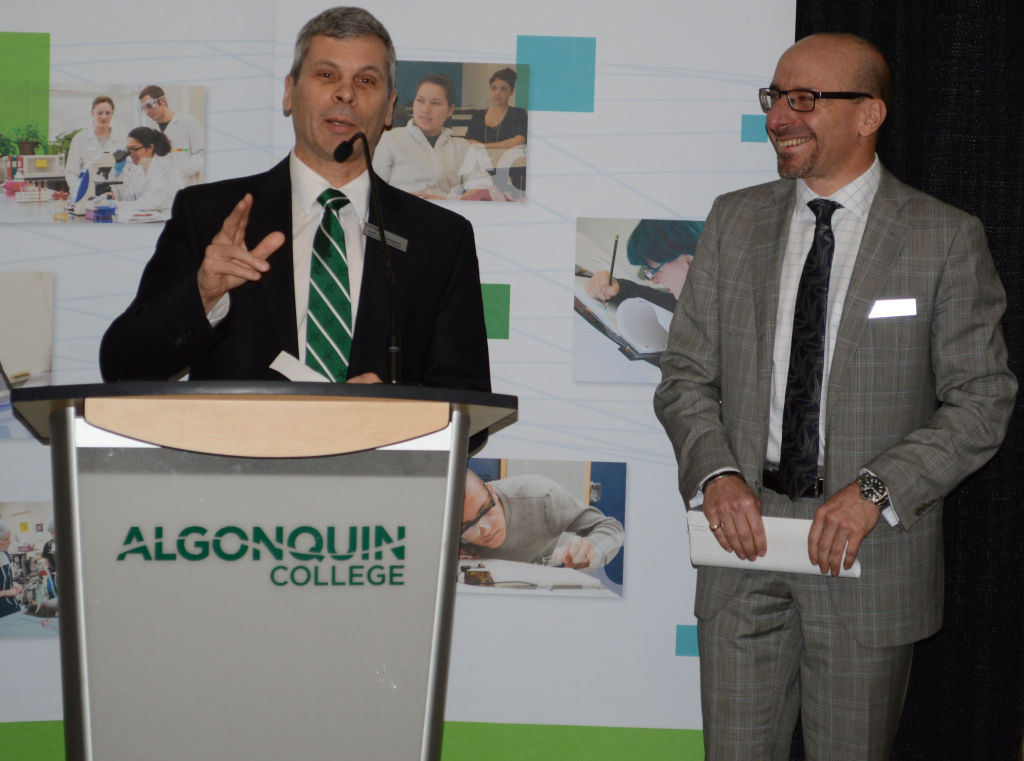 Algonquin’s new centre for innovation and entrepreneurship was unveiled on Feb. 11, but the day’s biggest reveal was the ambitious goal of the college.

That goal is to help Ottawa become “the most entrepreneurial city in Canada,” President Cheryl Jensen told a gathering of 50-100 people.

“Algonquin’s announcement that it would become a digital college startled us all and made us look to our own futures,” said Jensen. “I think that Algonquin can do that again.”

Jensen revealed this aspiration before announcing that Algonquin’s centre for innovation and entrepreneurship would be called Ignite AC.

The centre exists to offer a space in the college entirely dedicated to entrepreneurial activities, such as holding meetings or brainstorming sessions.

Jensen was among many who gave speeches in the crowded C-building entrance, where entrepreneurs, members of the media, and city councillors Rick Chiarelli and Marianne Wilkinson were in attendance.

It may seem unclear how the centre can make the impact that Jensen believes it will, but Mark Hoddenbagh, who is the school’s director of Applied Research and Innovations, believes education – the first step in an entrepreneur’s career – is crucial.

“Algonquin is seeking to enable entrepreneurs at any age or stage of life to start and grow their own companies,” said Hoddenbagh. He supported Jensen’s ambitions. “I believe Ottawa is well-positioned to be the most entrepreneurial city in Canada and that Algonquin has a seminal role to play in this quest.”

Like Jensen, Hoddenbagh gave a speech before Ignite AC was revealed. He spoke alongside Andrew Foti, who is the CEO of a business counselling company called Avokka.

The event had its share of dynamic moments, including the signing of National Association of Community College Entrepreneurship’s Presidents’ Pledge, and the launch of Initial PR, a public relations firm started by second-year public relations students at Algonquin.

Initial PR will be the first test of Ignite AC’s ability to help entrepreneurs. Algonquin hopes the firm will be one of many entrepreneurial projects that will use Ignite AC.

Bryant McNamara, the president of Initial PR, is confident in both Ottawa’s business environment and Algonquin’s new centre.

“I think any city has the potential to become the biggest entrepreneurial city in Canada with the right growth tactics,” said McNamara. “With (centres) like Ignite AC developing to help young minds flourish, I think that (Algonquin is) already in the running to continue to be recognized for diverse entrepreneurship”

After the speeches were completed, Jensen cut the yellow rope covering Ignite AC’s doors with SA President Sara Grainger and led the audience through the centre.

Ignite AC, which is located in the C-building, consists of three board rooms and several spaces that can be used for activities related to entrepreneurship. Any students, staff and faculty can use Ignite AC and some spaces in the centre can be booked online.

The centre is small but welcoming, with coloured walls lined with inspiring quotes and framed photos of entrepreneurs.