Getting a leg up on the competition 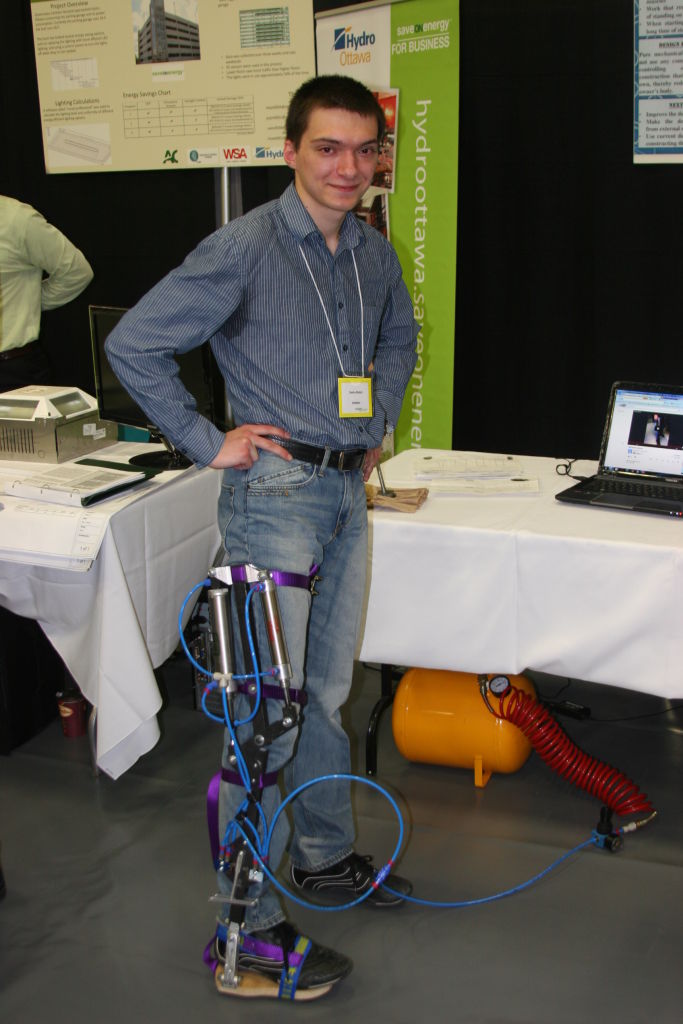 It would be an understatement to say that Dmitry Klishch was outmatched at the 2013 IEEE Global Humanitarian Technology Conference student poster competition on Oct.20-23 in San Jose, Calif.

Klishch, a second-year mechanical engineering technology student at Algonquin, was joined by experts in the field, some of whom held bachelors, masters and even doctorates. And there was Klishch, representing his program and the college with his invention called the Exo Support Leg.

So nobody expected him to place in the final five, let alone win the competition.

The idea for the Exo Support Leg came about after his mom broke her toe and was in crutches for an extended period of time. His invention is an advanced crutches system or brace, intended to keep the leg straight but because it’s fully mechanical, movement in all directions is still possible.

“I was just thinking, ‘Okay so a guy with crutches, he cannot really go anywhere. He could probably stay at home for at least a few weeks; he’s restricted in his movement, he cannot really do anything. He doesn’t have that freedom of movement,’’ said Klishch.

“But maybe it’s a good project to do. Should work on that more. And I investigated it and it could be used here and used here and I’m like ‘wow’ I didn’t expect that.”

After coming up with the idea, he began work on what is now known as the Exo Support Leg. It was in the preliminary stages and was very basic at that time.

The first fully mechanical prototype was at the beginning of February and finally had the finished product before April 5.

This was perfect timing as it coincided with Applied Research Day at the college on April 12 where Klishch unveiled his Exo Support Leg invention.

“For me it was just interesting to come into the public with a project like that and just see how the public react,” said Klishch.

Fast forward to the end of the 2013 winter semester when a professor and Institute of Electrical and Electronics Engineers (IEEE) member approached Klishch and convinced him to enter the competition in California.

After sending in his application, Klishch was later going through his emails in August when he came across a message from the IEEE Global Humanitarian Technology Conference (GHTC) that said his project was selected.

Remaining humble and grounded, Klishch was happy to be able to take part in such a prestigious and well-known competition. But at the time, he didn’t think he would be able to attend.

Klishch is an international student from Severomorsk, Russia. A small town near a military base with a population of approximately 50,000. He didn’t think he’d be able to leave for California because of the great lengths he would have to go in order to obtain a visa.

Luckily, the process wasn’t too strenuous and he successfully obtained a visa.

Since he wouldn’t be able to take the Exo Support Leg with him because of fears that the airport would confiscate it, he would have to present his project through visual aids and posters.

However, he was unsure of how to go about doing a presentation. He never had to present a project of this caliber to an international and respectable audience.

Klishch turned to Patrick Dawson, his first semester English professor and coordinator of technical communication in the faculty of technology and trades.

Dawson told Klishch that he needed to communicate and convey his message clearly to the audience.

Klishch needed to simplify things. Dawson told him that he shouldn’t be presenting the technical aspects of his project.

“He kept it pretty simple, pretty plain, had a conversation with them and it was different from the others.”

He was also advised to engage with the crowd and make it seem like it’s an intimate conversation between him and the audience.

“In an audience situation like that, don’t go out and give them enough information that they can hang on, and lots of pictures and keep moving. Don’t sound like you’re reading to them.”

The day after his presentation was the award ceremony. However, Klishch wasn’t present. He was invited to the University of Stanford to tour the campus and talk with representatives that were at the conference.

Klishch, thinking he was a longshot to win an award, went to Stanford for the day. In fact, while roaming around the university campus, Klishch was in the middle of winning the prestigious award for best student poster.

Upon his return to the conference, he was greeted with praise and congratulations from attendees. Unaware of what all the cheers were for, he was told that he won the award.

Klishch’s poster and invention was one of five students around the world to be selected in the competition. And for him to win this prestigious award, it’s an even greater achievement.

And while he’s only 19 years old, Klishch will complete the program at Algonquin and likely continue his studies afterwards by at least pursuing a bachelor’s degree. Although, many of his professors are telling him to obtain a masters and doctorate in order to advance his career and get more job prospects.

Klishch has since been working on several projects during his spare time but his father describes him as having a force without a vector.

“You have a whole bunch of ideas, cool projects but you just need to calm down, (take it) step-by-step,” said Klishch.