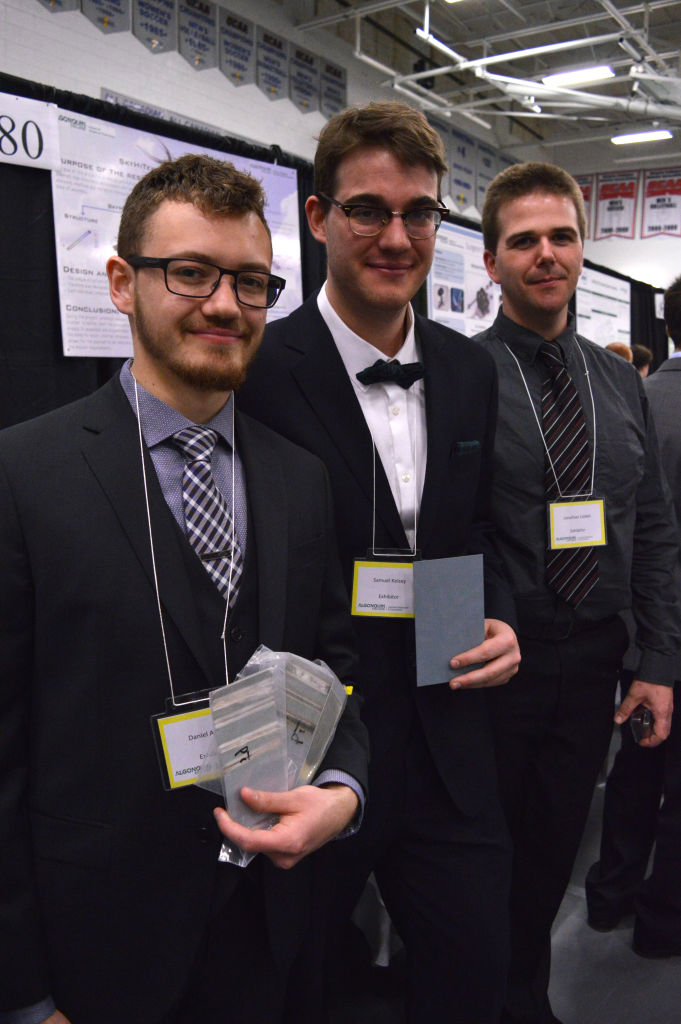 Daniel Arnold found his own.

“I didn’t want to do any of those projects,” said Arnold. He was looking for training in high-end equipment like scanners and 3D microscopes.

So Arnold reached out to his supervisor from a 2010 co-op placement he did at the National Research Council. He found him a contract with the Department of National Defense to test an environmentally-friendly way to strip paint from military airplanes. Paint hides damage to the plane’s metal body, and has to be removed after every 5,000 hours of flight.

Arnold and fellow mechanical engineering technology student Sam Kelsey got to work on the contract in November 2013. Classmate Jonathan Liddell joined them the following March.

Currently, airplane paint is removed with a chemical wash. This wash creates harmful by-products like hydrochloric acid, which run untreated down the drain.

“It’s kind of like pouring paint thinner into the river,” said Kelsey.

So the team tested a more environmentally-friendly option called atmospheric plasma. A plasma is a gas that has been pumped full of energy. It’s what lights up neon lights and plasma TVs.

“It’s not the healthiest things in the world, but it’s so much less,” Kelsey said. “It’s a puff of smoke and then it’s gone.”

One challenge the group did not expect was having to write a government report.

“They would write a report and it would come back just torn to pieces,” said lead professor on the project, Sandra Brancatelli. “They were very frustrated with that.”

But the hours of labour were worth it.

According to Liddell, their report is now published in the NRC library. A great reference from the NRC in addition to their unique experience landed all of them jobs in their field after graduation.

While students don’t usually choose their own research projects, the faculty encourages it because they know the team will be motivated, said Brancatelli.

“They wanted to do the project because it would open doors for them,” said Brancatelli. “They were going to do it anyway, whether they could incorporate it into their school project or not.”

Bracatelli said the project was a lot of work, but the team recognized its value.

“In the end, they had skills and experience that people coming out of school wouldn’t have,” she said.