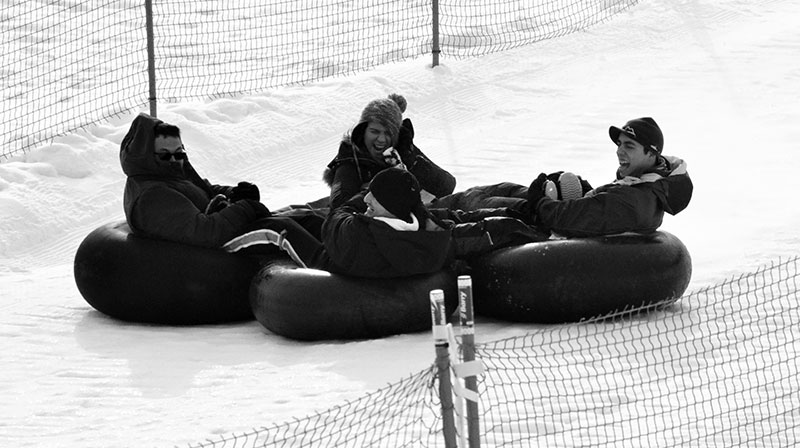 Laughter and merriment were in abundance as the Student Services Office held its annual tubing trip to Edelweiss Jan. 18, a welcome respite from the dark days of January.

“I think the fact that you’re getting outside and having fun and enjoying your time with others can really have an impact,” said Student Affairs Officer Valarie Bowman, the organizer of the event. “Part of Seasonal (Affective) Disorders is that you’re not spending that much time outside anymore and you’re not getting that daylight and everything. And that’s really the mainstay of the effect. So getting outside and having fun and being with other people who are also having fun can really perk people’s spirits up.”

According to the Canadian Mental Health Agency, about half a million Canadians suffer from Seasonal Affective Disorder (SAD) where they show symptoms of depression exclusively during the winter months. Outdoor activity is encouraged as the lack of sunlight from staying indoors is believed to be a major cause for the disorder.

And based on feedback from students on the trip, it worked.

“It made my weekend,” said Heather Armstrong, a Medical Radiation Technology student at Algonquin. “It’s definitely a positive experience, otherwise, we’d be stuck in res all weekend.

Katee Peterson, a photography student at the school said, “It’s so good to be outside and the weather makes everything great.”

The trip itself was only $5 making it an affordable recreation option for students who may not have a lot of money, which is another contributor to the feelings brought on by SAD.

“It’s a discount passed along to the students from Edelweiss,” said Bowman, when asked how the trip could be so affordable. “The Student Services end up paying the bulk because they want to help students who may not be able to afford the trip. They specifically put money aside in their budget to have these affordable trips for students.”

This is the fourth year the Student Services has put on the trip.