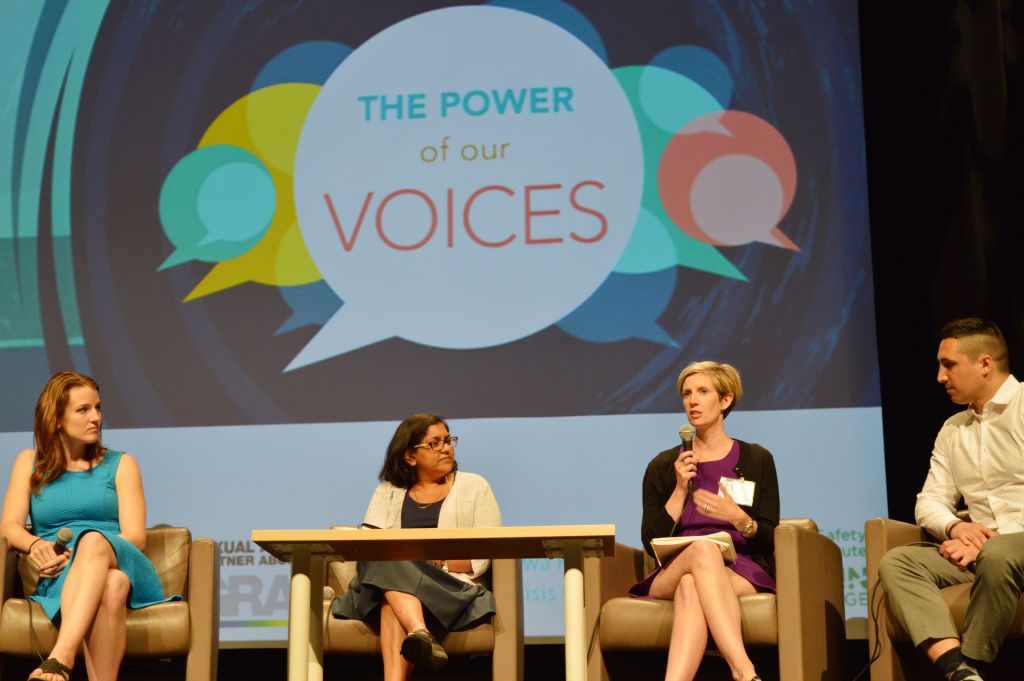 Victims of sexual violence on campus don’t always have a clear idea of what happens beyond counselling after they seek help, an expert told a panel at Algonquin on May 31.

Sonya Nigam, the director of uOttawa’s human rights office, made the point as part of a panel discussion focussed on campus sexual violence held at Algonquin Commons theatre.

“What we certainly see when students come to our office is there is a lot of confusion if they’ve experience sexual violence. There is worry about what will happen to them,” said Nigam.

“They’ve been told about counselling services already but they really want to know what can be done to help them live their daily life and also how they can avoid seeing the other person on campus, what can be done, interim measures that can be put in place.”

Carrolyn Johnston, whose position with Carleton’s Sexual Assault Services puts her on the frontlines, added that the university has taken a similar approach and stressed the importance of implementing policies to ensure victims and accused assailants are separated in the classroom and in residence.

“There are things we can do,” said Johnston.  “Saying to somebody ‘Sorry, the perpetrator also has a right to their education,’ that’s not good enough.”

Nothing was off limits as attendees were encouraged to chime in during the second half of the discussion, and topics such as high school dress codes and cyberbullying were brought up.

The discussion was held during the Free to learn: Confronting sexual violence at school event which had a mix of 78 registered students, staff and guests in attendance.  The event itself was funded by the Department of Justice and organized by Algonquin’s victimology program as a part of the Victims and Survivors of Crime Week.

The coordinator of the victimology program, Benjamin Roebuck, led the conversation of the panel comprised of Nigam, Johnston, David Veshkini from Ottawa Victim Services,  and Strong Orange’s Rachel Heffernan, whose mother Janet Heffernan led a presentation on the violence prevention organization earlier in the day.

However, the dialogue mainly focused on ways to tackle sexual violence within post-secondary institutes and each member brought their own unique perspective to the table.

Johnston and Nigam had the most to say on the topic due to their direct involvement through their positions at Ottawa’s universities and each spoke about the different ways they approach the issue at their individual institutes.

Nigam is mainly involved in policy development and committees and said that uOttawa takes a survivor-based approach through counselling and implementing measures for protecting victims.

For his part, Veshkini said college and university campuses often foster male gender roles and expectations, male entitlement and masculinity so engaging men and encouraging conversations is an important step in combating violence.

“On this point, a lot of it comes from the research that I do and trying to engage men to really actually stand up and make sure they know that this really isn’t a women’s issue, this is a man’s issue and this is a human issue that we all really need to address,” he said.

Heffernan, who mainly works with elementary, middle and high schools with Strong Orange, suggested that improved sexual education for younger students as a way to prevent violence later on.

Despite their different perspectives, each panelist agreed that the most important piece of the puzzle in the fight against sexual violence is student involvement and community collaborative partnerships.

“I couldn’t do my job without harbouring with student groups on campus.  There’s no way,” said Johnston.

“Doing this work is hard.  You need your allies,” she later added.