You are here: Home / Focus / Beyond the bottle: Séan McCann sings about recovery at TEDx Ottawa 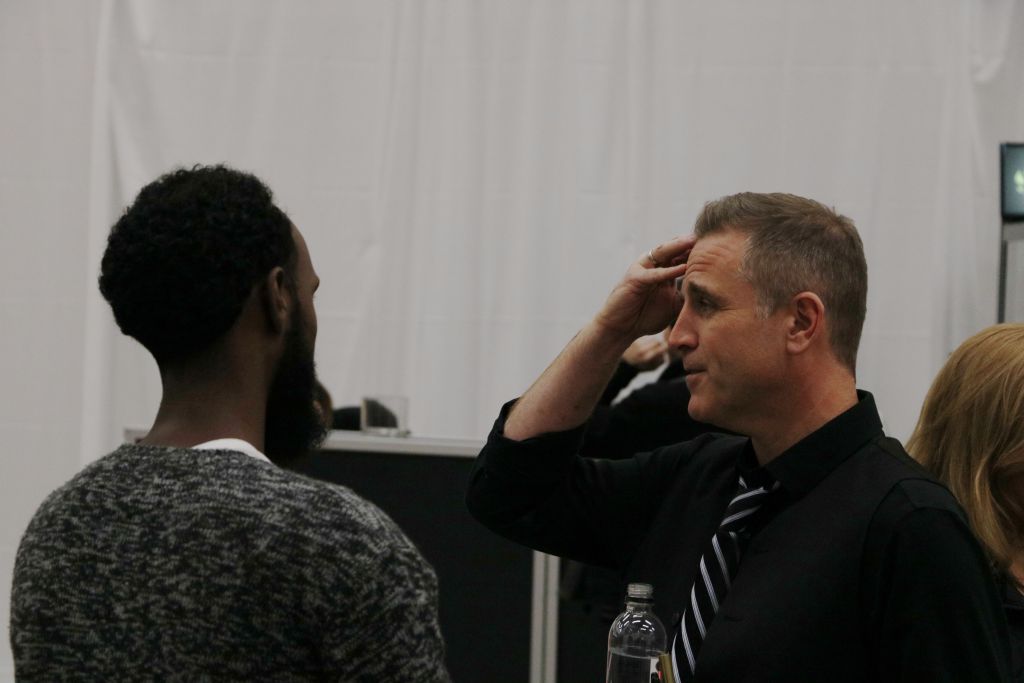 Séan McCann speaks to members of the crowd after his TEDxOttawa talk in the ACT. McCann spoke about addiction, recovery and the healing power of music.

“A secret can kill you, but a song can save your life.”

Séan McCann’s fingers gently strummed the strings of his old acoustic guitar as he spoke to the crowd that had gathered in the Algonquin Commons Theatre. The final speaker for the Ottawa TEDx, he played a simple melody to give a rhythm for his words as he talked about the events that led him to where he is today.

The former Great Big Sea front man spoke of the rock and roll lifestyle that saw him travel the world with a sea of empty bottles at his back. The childhood trauma that drove him to a 20-year bender that nearly cost him all that was good in his life. And the decision to leave it all behind, the fame and the addiction, for the sake of his family and his sanity.

“My love of music and my love of whiskey combined in my life, and we ended up forming Canada’s biggest party band,” said McCann during the presentation. “And every night for us, whether it was Tuesday in Saskatoon or Wednesday in Winnipeg, every single night for us was a Saturday night. And every day I went to work, on my desk there was a bottle of whiskey or rum, four bottles of wine – two white, two red – and 48 beer.

“For an alcoholic hiding from the truth, I felt like I’d won the lottery. And that’s where I hid, hidden in plain view for 20 years.”

McCann founded the band back in 1993 with friends Allan Doyle, Darrell Power and Bob Hallett. The heavy partying Newfoundlanders spent two decades near the top of the Canadian music industry, travelling from city to city in a drunken haze. And while McCann flourished in the buzz of the crowd and the buzz of the liquor, he kept a painful secret hidden deep below the surface.

“When I was 15 years old, a new priest came to our parish,” McCann told the crowd, his fingers continuing to dance across the fretboard of his guitar. “He was younger than the older fellas we were used to. He was very charismatic and became very popular. And every Friday, we were strongly encouraged to go to confession.”

As McCann began to shine the light on his dark story, his voice became quieter. The crowd drew silent, with only his voice and the notes of his guitar spreading through the theatre.

“One Friday, I found myself over to the right in church, and I ended up in his box. And as I was confessing my 15-year-old sins, he stopped me, interrupted me, and asked me my name,” said McCann. “He asked me if I played any sports, what I was reading, what my dad did for a living, where I lived. In retrospect, that’s a bit of a red flag, because confession is supposed to be anonymous. But I was 15. Instead of being careful or cautious, I just felt special.

“I remember going home and telling my parents that I’d met the new priest. They said ‘you should invite him over for supper’. And I did. He came up about a week later for supper. And we all felt special. Then he became like one of the family, he endeared himself to us all. Before the year was over, he asked if he could take me to Rome. He said I could go to Rome, and I could meet the Pope.”

McCann told his parents about his plan to travel with the priest. He begged his parents to let him go on the trip, and they said that he would be able to go if he could work hard and save up enough money to buy the plane ticket. And so he did.

“On that trip, he poured me my first drink, bought me my first cigarettes. And then he began to sexually abuse me,” said McCann. “And I felt betrayed, and ashamed, and angry. But I didn’t know who to tell. And I kept that secret buried in alcohol for 30 years, until I finally faced the truth with a song.”

Without missing a beat, McCann broke into a rendition of his song, Hold me Mother, which was the outlet for his pain. His voice echoed off of the walls of the ACT, leading to thunderous applause and a standing ovation from the crowd. Awash in the stage lights, McCann basked in the show of support, thanking the crowd profusely.

After the show ended, McCann and the other TEDx speakers participated in a meet-and-greet inside the Algonquin Student Commons. He posed for pictures and laughed alongside fans old and new before stepping off to the side for an interview with the Times.

“I quit drinking because my wife gave me an ultimatum,” he said. “I was in a spiral, a loss of control, and I was going to lose everything. [After] I was sober for about a year I started working on what was really important. I realized that I had to face the truth, or I would drink again. And that’s why I decided to come public and be open about it. It’s the hardest thing to do but it had to be done.”

McCann left Great Big Sea in 2013, after two years of sobriety left him disillusioned with the rock and roll lifestyle. While the decision drew the ire of fans and bandmates alike, he knew it was what he needed to do to heal. Now a solo artist, he has written five albums about the long road he has taken to get to where he is today.

“The songs that I’ve been writing over the last five years have been about recovery, have been about power, about overcoming big challenges and big changes,” said McCann. “It’s been an uphill battle, but I’ll never give that up. Music saved me. There’s power in it.”

And while McCann has had to go through hell to find his peace, he knows that there are still many others that struggle with the issues he once struggled with. He knows what it is like to be in pain and feel hopeless.

When asked what he would say to anyone going through the things that he had experienced, he didn’t hesitate to answer.

“Don’t give up,” said McCann. “I’m not successful because I’m smart or gifted, I’m successful because I didn’t give up. We’re stronger than we think. The hardest thing is facing the truth, and that’s what we all seem to be avoiding. If we face it, though, we can move forward, we can un-stick ourselves. That’s the key to it, to do that work and help ourselves.”

Beyond the bottle: Séan McCann sings about recovery at TEDx Ottawa Reviewed by Trevor Oattes on October 29, 2018 .

“A secret can kill you, but a song can save your life.” Séan McCann’s fingers gently strummed the strings of his old acoustic guitar as he spoke to the crowd that had gathered in the Algonquin Commons Theatre. The final speaker for the Ottawa TEDx, he played a simple melody to give a rhythm for […]

“A secret can kill you, but a song can save your life.” Séan McCann’s fingers gently strummed the strings of his old acoustic guitar as he spoke to the crowd that had gathered in the Algonquin Commons Theatre. The final speaker for the Ottawa TEDx, he played a simple melody to give a rhythm for […]