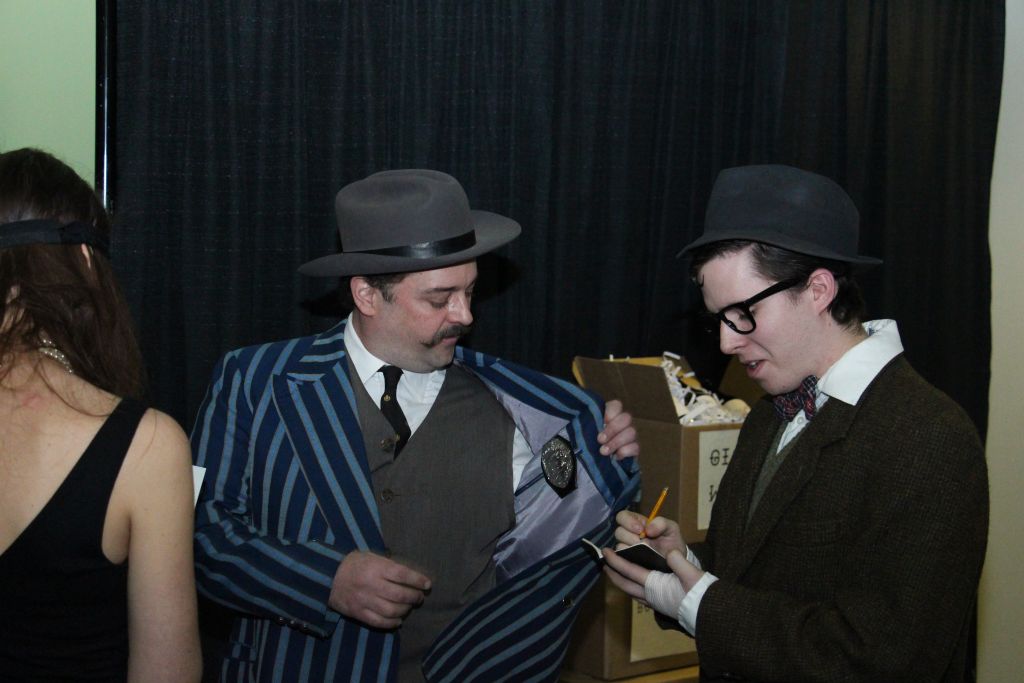 Flappers crowd the bar and bright brassy jazz music can barely be heard over the excited hum of the crowd at Algonquin’s Restaurant International on March 7.

There has been a murder.

Desirée DeLaCroix, proprietor of an escort service, has collapsed soon after sipping her dram of prohibited alcohol.

The suspects? A disgruntled employee, a mayoral candidate whose reputation could be tarnished by her customer log, the young proprietor of the illegal speakeasy, the local newsman, the chief of police and a local loan shark.

And yet, the mood is light at the Mystery at the Speakeasy event, a night of intrigue for a good cause.

As the actors from Vintage Stock play out the night’s entertainment, guests listen to guest speakers, bid on silent auction items, and try to solve the mystery of DeLaCroix’s murder.

The four-course meal is provided by a class of culinary students and served by students from the hospitality program.

The characters meander through the room, chatting with guests and trying not to give too much away.

To the team watching more than a semester’s work come together in one spectacular evening, guests in costumes are a good sign.

“It means they’re really enjoying it,” said Marian Ntanial. “They’re not just going to the event; they’re embracing it.”

As the night rolls on, raffles are won, auctions are called, meals are finished, and the mystery is solved.

The surprise perpetrator is DeLaCroix’s young employee, Josephine Johnston, who murdered her employer to get out of her contract.

Only a handful of the ballots submitted guessed correctly, and only one guest could place a correct motive.

“Loved it,” said guest Jim Bayne looking back on the evening. “I was way off the mark, but I enjoyed my meal and I enjoyed my night.”

“I think this was a really well hosted event,” said Candice Hay-Janke, an event management student and volunteer. “I like the fact that it was held at Algonquin which helps support the program as well.”

As the guests filed out, the spell that transformed the restaurant evaporated, and volunteers ensured they all had a safe ride home.

“Everything went really smoothly, we had really good comments,” said Joel St. Pierre, one of the student organizers of the event, who was relieved to see so much work come together.

“We’re finally going to be able to relax, analyze what went wrong, what went well, and learn from that.”

“This team was fantastic,” said program coordinator Sylvia Densmore. “They’ve taken the concepts and everything they learned in class and applied it. They did a lot right tonight.”