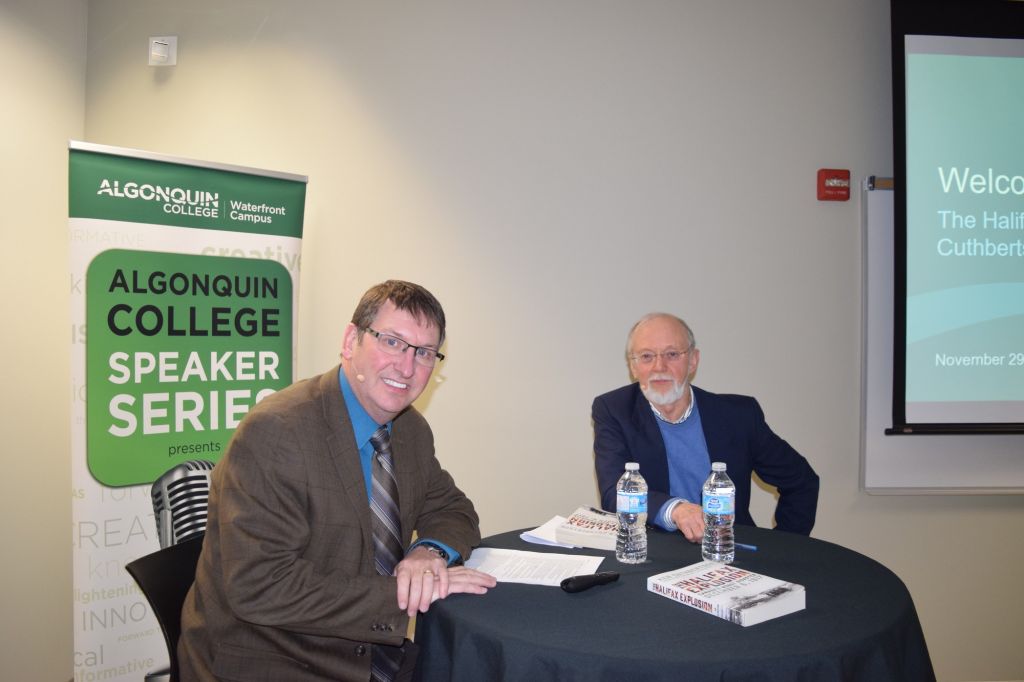 From left, Jamie Bramburger, manager of community and student affairs, and Ken Cuthbertson.

On Dec. 6, 1917, a French munitions ship collided with a Norwegian vessel in Halifax Harbor, setting off an explosion that killed more than 2,000 people. The event is still considered one of the worst disasters in Canadian history.

To mark its 100th anniversary, Canadian author Ken Cuthbertson has released a new book: The Halifax Explosion and on Nov. 29 he came to Algonquin’s Pembroke campus for an intimate seminar and book signing.

Over the 90-minute conversation-style seminar, Cuthbertson discussed the lingering questions and untold stories of this tragedy, the details of which are still highly debated in the historical community today.

Among the lesser known facts, Cuthbertson revealed that in his research he discovered that there were likely hundreds of people killed in the explosion who were never accounted for because they were not local residents, but travelers looking for work.

Later in the seminar, he reminded the crowd to consider that, at that time, Halifax was mostly women and children while the men were at war. The disaster left hundreds of orphans whose fathers were dead in France and whose mothers lay in morgues at home.

“They were there one day, and gone the next without a trace,” he said.

When asked about the opportunity to speak to fans in such an intimate setting he said, “It’s fun. It’s like the cherry on top of the ice cream sundae. You don’t really think about it when you’re doing it, because you have to write for yourself, but it’s fun.”

The book was a passion project for Cuthbertson; his mother was born in Halifax just after the explosion. After she passed away he was motivated to research his deep family ties in the area which eventually led to the book.

It was well received, judging by the group of 35 who sat in room 328, with Cuthbertson only a few feet in front of them. They hung on his every word and roared at his every quip. Many took feverish notes, as though there would be a test at the end, although no one in the room could have been considered typical student-age.

Jane Klienman and Janet Shultze-Jones were two Pembroke residents in the crowd. Both women have family ties to the region of Halifax and were excited to be able to listen to an author so well versed in the region and its history.

Both said they were thankful for Algonquin’s Pembroke campus and its ability to attract people like Cuthbertson and host events like the Speaker Series.

“What a treasure, an absolute treasure,” Klienman said.

When asked if they would be attending future Speaker Series events Klienman said “It’s in my book already.”

Jodi Bucholtz, Algonquin marketing officer and an organizer for the speaker series, was thrilled with the turnout, and promised that each and every Speaker Series guest would leave the audience wanting more.

It was the second leg of this year’s Algonquin Speaker Series. The next speaker is Charlotte Grey, another Canadian author, on her book The Promise of Canada on Dec. 6.