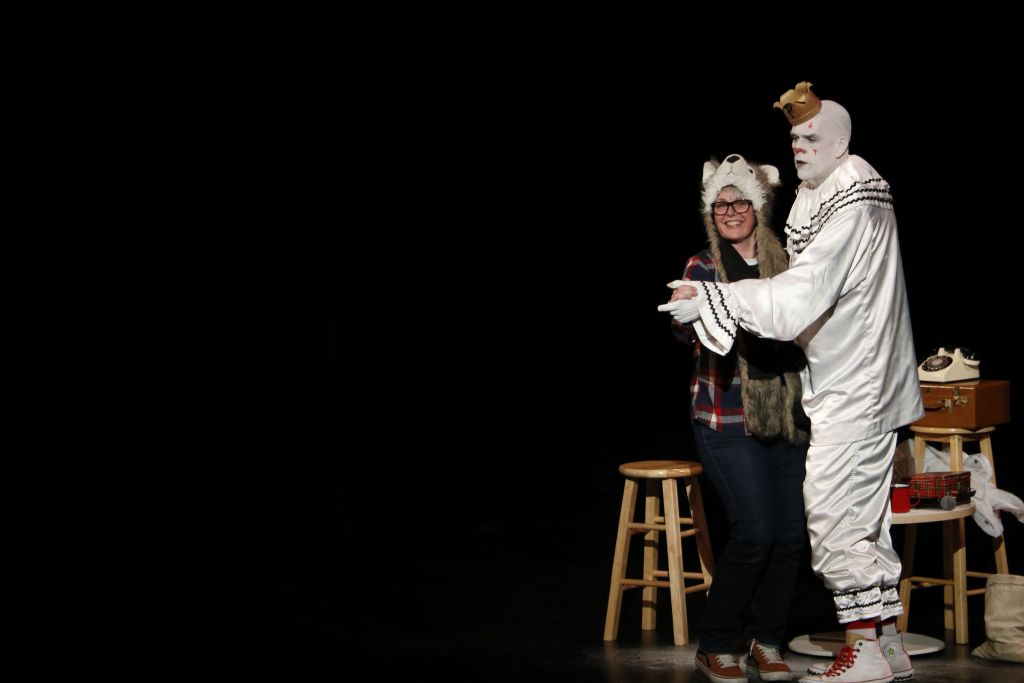 Renowned entertainer and America’s Got Talent alumni Puddles Pity Party brought his blend of costumed comedy and baritone vocals to the Algonquin Commons Theatre on Nov. 7.

Standing at six-foot-eight and dressed in a frilly white costume, the mute clown cut an imposing figure as he walked outside of the ACT. Despite his stature and the sombreness of his painted-on frown, he was happy to meet with audience members, shaking hands and doling out massive hugs before making his way to the stage.

The pessimistic Pagliacci began his show with morose exuberance, wordlessly scooting around the stage on a wooden stool as the audience, which filled the ACT to about 70 per cent (roughly 500 people), began to smile and chuckle. By the time he began the musical aspect of his performance, he had already managed to break the crowd into roaring laughter several times.

The crying clown’s rich baritone voice poured over his interpretations of Bowie’s Space Oddity, Queen’s Under Pressure, a mashup of Cash’s Folsom Prison Blues and The Who’s Pinball Wizard and a hard-rock cover of Adele’s Hello. Puddles also allowed one unlucky member of the audience the chance to attempt to sing a song that he did not – in any way, shape or form – know the words to.

Indeed, in many ways, the depressed jester – Deprester? – centred his show upon his audience. Puddles frequently stumbled into the crowd, taking onlookers by the hand and pulling them on the stage to play a part in his pity party.

Lauren Hart, a graduate of Algonquin’s theatre arts program, was the first lucky soul to be chosen for Puddles’ festival of sadness. She laughed on the stage as he struggled to pour himself a cup of steaming hot coffee, most of which he poured on himself.

“I got pulled up on stage by Puddles to participate in his show, which was a lot of fun,” Hart said after the show. “I had been offered tickets to move down to the floor, so I thought we were maybe being set up for something. He pulled me up on stage right away and I was just like, ‘oh no, they think we’re late. We’re not late, we didn’t interrupt your show, I promise!’”

Though Hart enjoyed the experience, she admitted to initially having reservations toward going on stage.

“I wasn’t nervous, I was just terrified that he’d make me sing with him. I love to sing, I just don’t think people like to hear me sing,” Hart said with a grin. “So thanks for the good evening, Puddles, and for the fun times.”

Six other audience members went on stage during the event. One played the part of a confused rocket scientist, another was made to eat a meal by the clown during his rendition of Under Pressure and another was made to repeatedly whisper the phrase “If you build it, he will come” for some surreal reason.

Puddles biggest feat of audience interaction came midway through the show. During a song, he plucked a cellphone from a crowd member’s hand for a selfie, only to hand the phone back to a different crowd member, evoking a huge laugh from the audience. He passed phones between audience members until close to a dozen people had to pass their tech around the room until their phones were safe in hand. When the playful Pennywise turned back to the crowd and saw that order had returned to his subjects, he actually seemed disappointed, a deflated sigh sagging through his body.

“Everyone got shocked, it was quite a fun thing,” said Lei Wang, a visitor at Algonquin who had her smartphone commandeered by Puddles. “He was singing the song and he was moving through the crowd with my phone, I have some videos from when it was moving around. It’s definitely been a good night.”

After playing through his set and receiving a standing ovation from the audience, Puddles returned to the stage for an encore performance of Lorde’s Royals, which is the song that brought him into the mainstream with 24 million YouTube views. With only the audiences’ stamping feet and clapping hands as instrumentation, he gave an intimate cover of the song that made him famous, receiving yet another standing ovation.

Puddles was unable to comment on his performance after the show. He doesn’t speak, after all.

Renowned entertainer and America’s Got Talent alumni Puddles Pity Party brought his blend of costumed comedy and baritone vocals to the Algonquin Commons Theatre on Nov. 7. Standing at six-foot-eight and dressed in a frilly white costume, the mute clown cut an imposing figure as he walked outside of the ACT. Despite his stature and […]

Renowned entertainer and America’s Got Talent alumni Puddles Pity Party brought his blend of costumed comedy and baritone vocals to the Algonquin Commons Theatre on Nov. 7. Standing at six-foot-eight and dressed in a frilly white costume, the mute clown cut an imposing figure as he walked outside of the ACT. Despite his stature and […]