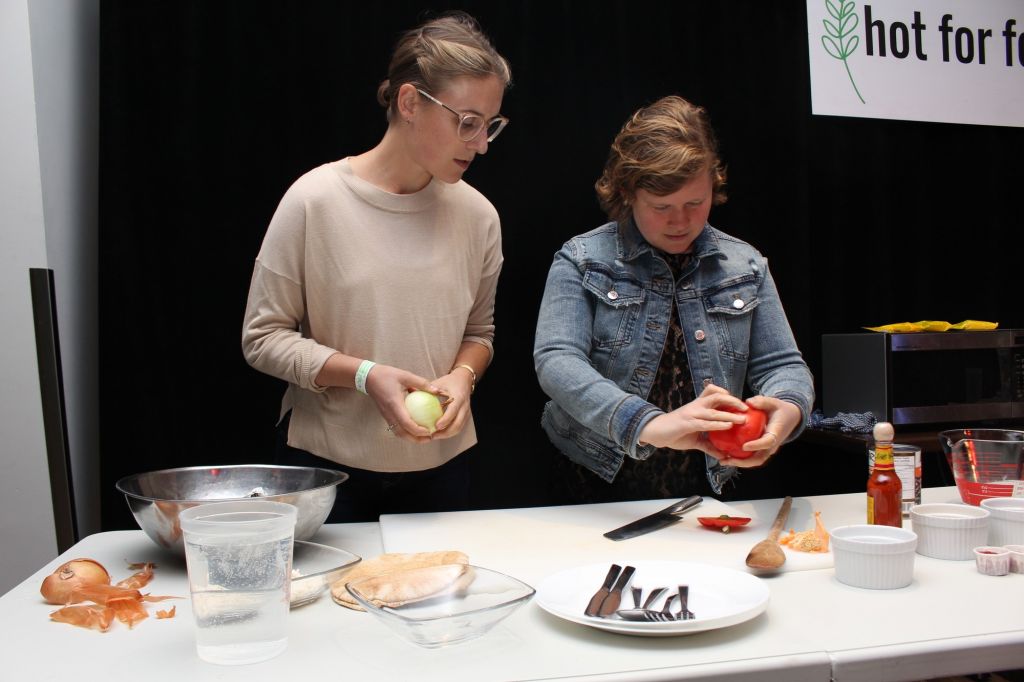 Teams of two competed against each other at the Observatory for the first ever hot for food campus cook-off on Oct. 10.

It was a full house in the Observatory with roughly 50 people in the audience. The cook-off began at 7:45 p.m. with teams of two had 30 minutes to create the best meal they could with vegan ingredients that would be found in a dorm room.

The idea was to help the students become better cooks even with limited resources.

The team’s creations were judged on creativity, originality and taste.

“It was really fun and we didn’t know what to expect,” explained Alana Crocker. “It ended up being a lot of fun and we’re a great team.”

Crocker and Amiro’s team had created a stuffed pepper with vegan meat, non-dairy cheese and onions with a side of pita bread with apple slices laid in them.

“I didn’t find the time limit challenging but not having certain utensils and spices really threw me off,” said Meritt MacKeen.

MacKeen and Legere’s team had created a chilli with pepper slices on the top and a cheese curd in the centre with a side of pita bread spread around it and cumin sprinkled on the plate for decoration.

By the end of the event, the judges picked their winners: Crocker and Amiro with their stuffed pepper which won them each $100 Loblaws gift cards.

The event was hosted by YouTube celebrity Lauren Toyota for her hot for food cookbook tour.

“This is the first time we are doing the hot for food campus cook-off and that inspiration [came from] my recipe series,” said Toyota. “I did a series on my Youtube channel where I don’t even know what I’m going to make I just turn the camera on and rummage through my fridge and cupboard and I come up with an idea.”

Toyota turned vegan in 2010 and started vlogging and taking photos of her food.

“When I lost my job in 2014 [due to the Bell Media cutback] I was ready to take on running my own business and doing my own thing,” Toyota explained. “It was sort of the push I needed to just do it. So the day I got laid off, truthfully, I was jumping up and down and was very excited and knew and sensed there was something bigger.”

About five months later, Toyota had started to make more recipes and took more photos which eventually lead to the start of her YouTube channel hot for food.

“That’s when things started to take on this new life and I started to reach way more people worldwide,” she explained. “It was so exciting, [suddenly] the conversation around vegan food and good vegan food and how to cook vegan food was no [longer] weird to talk about.”

Toyota explained that it makes her very happy to see that the vegan movement and the hot for food movement has reached so far.

“I got to go on this book tour and talk to people and hear these stories about how you all have transformed your lives using recipes I made,” said Toyota to the audience. “To me, that is the ultimate honour and I get to channel some of that crazy magic and make some food [for] people [who] actually want to make it and eat it and learn from me.”

Toyota explained that she is on a mission to educate people about food, how to cook it and eat better.

“You have to think about your health and well-being and the food that you are eating,” she said. “I remember when I was in college I decided I wasn’t going to be vegetarian anymore. It was the first year of college and I sort of gave into the social pressure of just fitting in, I got lazy, I didn’t want to put in the effort anymore and I really regret it.”

She explained that during that time she didn’t feel well and actually started to drink more alcohol.

“It wasn’t until I cleared out the meat and the dairy and making a diligent effort to eating plant products that I noticed a significant physical, emotional and mental shift and change,” said Toyota. “I started listening to the way I felt and tapped into what does feel good.”

Toyota doesn’t like the word healthy, in her opinion, there are too many interpretations about what healthy is.

To her, being healthy is whatever makes a person feel and perform the best.

“That’s how I became a lot more into my body and decided to become vegan and I knew it was the path that would make me feel better,” she said.

Teams of two competed against each other at the Observatory for the first ever hot for food campus cook-off on Oct. 10. It was a full house in the Observatory with roughly 50 people in the audience. The cook-off began at 7:45 p.m. with teams of two had 30 minutes to create the best meal […]

Teams of two competed against each other at the Observatory for the first ever hot for food campus cook-off on Oct. 10. It was a full house in the Observatory with roughly 50 people in the audience. The cook-off began at 7:45 p.m. with teams of two had 30 minutes to create the best meal […]