You are here: Home / Entertainment / Juggling, castles and arts light up Algonquin’s Buskerfest 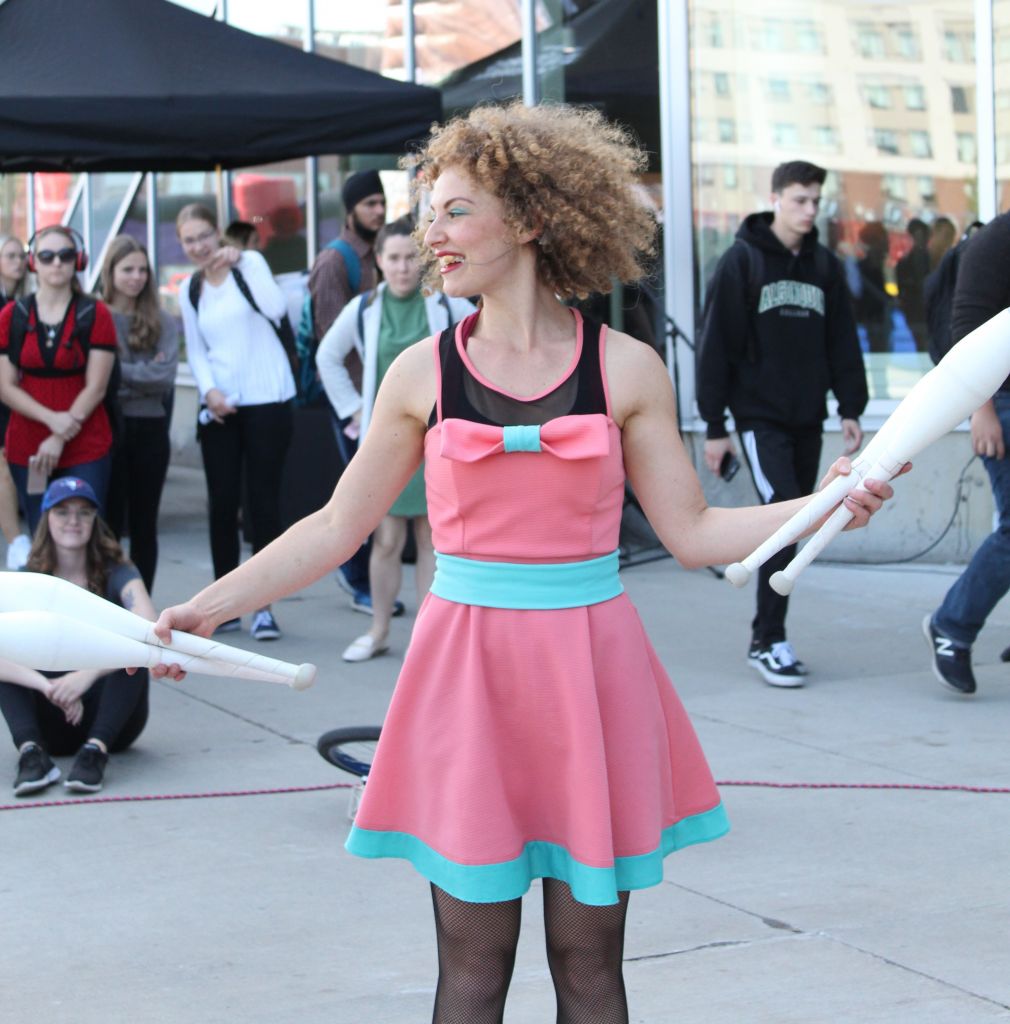 Bekka Rose smiling at crowds as she finishes juggling. She was one of the street performers who came to Algonquin's Buskerfest on Sept. 19. Photo credit: Joseph Wang

As the ragtime music cut out, a pop song played on the stereo. Bekka Rose, a busker at Algonquin College’s Buskerfest, walked into a small open ground right outside the Student Commons entrance.

“Gather round, ladies and gentlemen,” she shouted out loud to people who pass by in front of the building.

The crowds at the Sept. 19 event were small at first but quickly grew to about 50 people.

Rose took her juggling clubs, which look like bowling pins, out of a bag.

After a quick warm-up of juggling three clubs, she moved to four, and then five.

The clubs went on round trips back and forth, creating a loop. She sent them midair, and when they dove, Rose always made sure they landed safely in her right hand one at a time. Then her left hands would launch them into the sky again.

Cheers and applause erupted from the audience as Rose caught all five of her clubs from their last trip.

“I have been doing this for over 15 years,” said Rose. “It’s physical but it’s also an art form. It’s sort of a cross between a sport and an art. It’s also social and it’s a good way to be creative with other people.”

Throughout the college’s Buskerfest, Rose’s show was among the most popular. But she wasn’t the only source of entertainment. Bouncy castles were set up on the lawns outside Student Commons, street singers and performers presented their talents and companies including Circle K, Winners and DoorDash pitched tents where they attracted students to participate in their promotional activities.

“The Buskerfest that the student association hosts bring together outside companies that are kind of related to student bodies,” said Allison Barnes, events programmer of Algonquin SA. “We animate the space that we have here. We get students cool inflatables so they can get their mind off always being in class.”

Some students did enjoy the downtime the event provided. First-year computer programming student Jonathan Carle came to the event after hearing about it from a friend. He tried out some of the inflatable castles.

Carle said the castle that was most fun was the one with big inflated bumps standing right beside each other in a row. Those who play on it had to maintain balance on the bumps while attempting to jump from bump to bump to reach the other side of the castle.

It was loved by a number of students as they waited under the castle to see if they can make it to the other side without falling into the gaps between bumps. Most of them have failed. Yasser Bengassem is not one of them. He passed all the gaps within just one attempt.

“I played soccer and I did some parkours,” said Bengassem. “That’s probably why I was able to do that.”

Besides entertainment, the staff of the college integrated something educational into the event as well.

There were some students tie-dying t-shirts on the lawns using paint bottles. According to Sarah Crawford, Algonquin’s Sexual Violence Prevention and Harm Reduction Coordinator, this was a little activity she and her colleagues were organizing for Project Lighthouse, the college’s resource to help students build healthy relationships and support survivors of sexual violence.

“Today we’re doing a tie-dye to raise awareness and talk to students about how to ask for consent and have good and healthy relationships,” said Crawford.

To get t-shirts to tie-dye, students needed to talk to Crawford’s team about what consent means and how they would ask for it in relationships.

“It’s an educational art-based activity,” said Crawford. “We want to use lots of different ways to engage students. Art is one of them.”

As the ragtime music cut out, a pop song played on the stereo. Bekka Rose, a busker at Algonquin College’s Buskerfest, walked into a small open ground right outside the Student Commons entrance. “Gather round, ladies and gentlemen,” she shouted out loud to people who pass by in front of the building. The crowds at […]

As the ragtime music cut out, a pop song played on the stereo. Bekka Rose, a busker at Algonquin College’s Buskerfest, walked into a small open ground right outside the Student Commons entrance. “Gather round, ladies and gentlemen,” she shouted out loud to people who pass by in front of the building. The crowds at […]